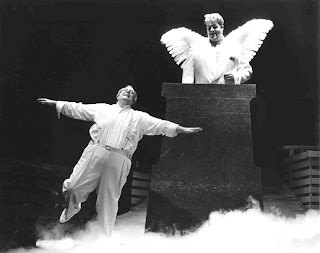 My father’s military experience was a stint as a Naval officer from the late ’40s into the Korean War, and included a time in the Mediterranean and occupied Japan, where he bought one of the earliest Nikon cameras. He kept in touch with some of his shipmates, but I never got the sense of bonding urgency that characterizes those who got a foxhole’s-rim view of battle.

There are different kinds of battle, many without bloodshed or even bruises. Sometimes it’s only the task of battling a calendar while pursuing a shared artistic vision into the high-adrenalin arena of the theater stage. While I wouldn’t pretend to compete with anyone who’s defended this country or opened up a patient in the operating arena or tried to grab a home run in a playoff game’s ninth inning, I’m thinking at this holiday time of year of a place where I forged some memorable bonds: a theatrical dressing room.

I made my debut with the NY State Theatre Institute in 1998, in its first production of Joe Raposo and Sheldon Harnick’s A Wonderful Life, musicalizing George Bailey’s pursuit of some meaning for his existence. My own life had acquired a vast new meaning, as my daughter – my first and only child – was born the year before. Fatherhood invited me to redefine my life in a more responsible manner. I decided instead to pursue theater more actively.

For more than a decade following that, I was cast in one or more shows per season, the one always being the big Christmas show, including Miracle on 34th Street and The Circle of Christmas. While there was always a sense of family about the place, it was concentrated for me in the dressing room I shared with a fairly steady group of others.

As with any family, there were factions. What brought together this particular group was a shared sense of fun and responsibility – any good performance demands that – leavened by a sense of humor. There could be up to eight of us sharing this space in a given show – there were huge casts in some of those events – and this meant also sharing the space with our costumes, our makeup kits, and the random boxes of theater gear that had been stashed in the room for lack of any other storage space.

NYSTI teacher-actors John Romeo and David Bunce were dressing-room stalwarts, both of them funny guys but where David was given to energetic spontaneity, John had a deep, dry wit that he spun into well-crafted jokes and incisive rejoinders. And when I was the newest of newcomers, they made it easy for me to figure my way around the place.

For the Wonderful Life productions and into Miracle, we had Tim Booth in the room. He’s gone on to the Broadway cast of Mamma Mia. The passion you saw in his performances characterize the real-life Tim, who made an event of everything going on around him – and made you feel like the finest actor he’d ever worked with. Although Gary Lynch didn’t perform any of the holiday shows with us, he was the centerpiece of two productions of 1776, complete with hilarious tales of his own Broadway runs.

Joe Quandt had been a NYSTI company member in its earlier incarnation as the Empire State Institute for the Performing Arts. Free-spirited and multi-talented, he brought intelligent earnestness to the room, and channeled Glenn Ford in his Miracle role as Attorney Mara. Ron Komora started with NYSTI at about the same time as I did, and was a bastion of calm. Efficient calm, too, as he managed to finish addressing his Christmas cards well before the show even opened. That calm was needed when David Girard burst onto the scene, a brilliant actor – you may have just seen him in Peter Pan – who rides his restlessness right into the role he’s creating. David Baecker, who teaches theater at Russell Sage College in Troy – where NYSTI was based – also joined us there for several shows, including a turn as Miracle’s Fred Gailey.

I’m sure I’ve left someone out, but this is a cumulative picture that grew over those many years and defined, for me, the sense of the approaching holidays. We worked hard to put those shows together, and walked the high-wire in front of daytime student audiences (forget trying to continue a scene right away should the romantic leads kiss) and the adult crowds who attended on the weekends.

Any reasonable personality profiling system would reveal how different each was from the other, but that shared sense of purpose builds instant bridges. We had dinner parties together and gathered for movies together – and still do the latter when we can wrest our respective schedules into sync. It was easier when we were all in the same workplace.

My wife and daughter just finished decorating the Christmas tree. The living room looks appropriately festive now, and I’m hoping it’ll inspire me to get the cards out before too long. I look forward to seeing friends in the coming days, but I’m already lamenting the lack of lines to learn. I miss the dressing room.
Posted by B. A. Nilsson at 11:38 PM

BA-wonderful post. I, too, miss the boys in Dressing Room #3. It was truly a locker room scene and full of great jokes, nasty comments and the best of friends. Thanks for memorializing it.

BA - I too miss D3 desperately and wonderful insight into the festive atmosphere and shared comraderie (not to mention the endless highjinx) shared by all. I still think "If only the theatre had gone through with the proposed renovation, then, perhaps we could have laid the groundwork to convince the architect in charge of the project to include a secret room attached to D3 with a wet bar, cigar area, Video On-Demand, a roll-top desk for Ron, a small studio in the corner for Quandt and Bunce to paint, a large bathroom with heated toilet, and of course, endless amounts of mouthwash to fake vomit with." Alas, the room is currently occupied by Lost Boys played by little girls. You understand, the cruel irony is definitely not lost on me ;)