From the Tech Vault Dept.: There can’t possibly be a more technologically dated piece in my files than this one. Here I am, in 1995, telling you how to hook up your computer’s audio output to your home stereo system. Who does that any more? As a matter of fact, I do. If there’s an indignity involved, it’s the horrific rewrite some subeditor put my piece through, so I’m satisfying my still-bruised ego by posting it here in its original form. (Photos by John Popplewell.)

MY IDEA OF AUDIO HELL is the multimedia section of any computer show. There’s something about the output of all those tiny, tinny speakers that makes my back teeth think of fingernails on a chalkboard. Because most of those loudspeakers sound terrible. When it comes to any multimedia enterprise – I’m thinking especially of television now – audio tends to get short-shrifted. A few manufacturers are offering terrific computer speakers, but they’re not cheap. And chances are that right now you’re listening to a possible solution to the computer audio problem. 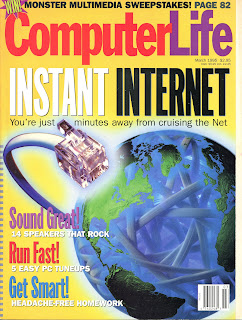 Let’s say that you recently picked up a multimedia kit for your computer. Which means you probably did what I did: shopped around for the right CD-ROM player and sound card combo, and then went along with whatever speakers were thrown in. Try this simple test: Heft one of the speakers in your hand. If it weighs about the same as this magazine, don’t look for your audiophile friends to swoon at the sound of it..

There are alternatives at hand. First and easiest is a pair of headphones. They sound better than those cheap speakers, and they bother nobody else. But headphones will always be a secondary technique, because nothing takes the place of being able to crank that music! You’ve got a good stereo system playing – so route the sound from that sound card into your stereo and enjoy the assault of real amplifier muscle. Or fire up a round of Doom and enjoy the assault.
Read more »
Posted by B. A. Nilsson at 10:12 PM No comments:

I’ll Give You a Camera

I’VE NEVER LIKED having my picture taken. Of course, it’s required when pursuing and promoting entertainment gigs, but I’ve learned to endure it much the same way as I endure dental work. When I was five years old, my family lived in the northern New Jersey town of Glen Rock in what seemed to be a large house on South Maple Avenue. It turned out that Duncan Butler, our next-door neighbor had a photography studio in town, where my younger brother and I had our portraits taken, attired in little-boy suits and 60s-thin bow ties. Even – or perhaps especially – at that age, I was embarrassed by my visage.

All of this I mentioned in a piece I posted here a decade ago, and it appears to be the only mention you’ll internet-find when searching for the photographer. (You can also find a few credits here at discogs.com, but they don’t show up on general searches.) As a result of that blog post, I recently heard from a man who, while researching writer-composer Paul Bowles, came across a Discogs listing for a ten-inch Atlantic LP titled “Haiti Dances,” for which Bowles wrote liner notes. And Butler is credited for the cover photo. Imagine the poor researcher’s bafflement when all he could discover was that old blog post of mine! He sent me a message, and I told him the rest of the story, which I’ll now tell you.

In my teens, I liberated myself away from the pop-music hits and discovered the wonders of classical and jazz, among other poorly named styles, and began obsessively collecting records. Records, mind you, those 12 by 12-inch long-playing marvels that captured wonderful music in their grooves and offered an education on their rear covers.
Read more »
Posted by B. A. Nilsson at 10:54 PM No comments:

It’s the Taxman Dept.: As you struggle to meet the IRS deadline today (actually, the deadline is next Monday, but today’s date has a mystical ethos about it), consider the hidden taxes we must pay, particularly the result of tariffs imposed on imported goods. When Robert Benchley wrote the piece below in 1922, the country was still reeling from the effects of World War I, during which President Wilson lowered or eliminated many tariffs, even while creating the Federal Reserve in order to centralize banking. His tariff-lowering Underwood-Simmons Act also re-established the federal income tax. By 1919, the Republicans had regained control of the House and Senate, and made news with their Emergency Tariff of 1921. No doubt this was on Benchley’s mind when he penned this essay. Still to come from the Republicans was the Smoot–Hawley Tariff Act of 1930, which helped worsen the Great Depression. Just thought you’d like to know.

LET US GET THIS TARIFF THING cleared up, once and for all. An explanation is due the American people, and obviously this is the place to make it. 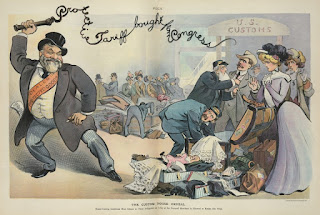 Viewing the whole thing, schedule by schedule, we find it indefensible. In Schedule A alone the list of necessities on which the tax is to be raised includes Persian berries, extract of nutgalls and isinglass. Take isinglass alone. With prices shooting up in this market, what is to become of our picture post-cards? Where once for a nickel you could get a picture of the Woolworth Building ablaze with lights with the sun setting and the moon rising in the background, under the proposed tariff it will easily set you back fifteen cents. This is all very well for the rich who can get their picture post-cards at wholesale, but how are the poor to get their art?
Read more »
Posted by B. A. Nilsson at 12:46 PM No comments:

From the Classical Vault Dept.: Thirty-five years later, Harlow Robinson’s Prokofiev biography is still the best of an ever-increasing shelf of such studies. But for the best overall picture of the composer and his life, read it alongside Robinson’s more recent volume of selected letters by Prokofiev – and then tackle the three-volume autobiography. And click here for my review of one of the concerts mentioned below.

TEN YEARS IN THE MAKING! Eight trips to the Soviet Union! What sounds like a spy thriller is in truth a biography of one of this century’s most popular and controversial composers, Sergei Prokofiev, written by SUNY-Albany professor Harlow Robinson. 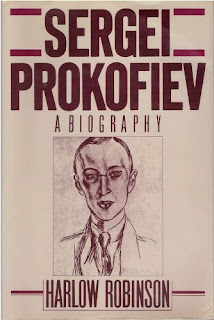 In conjunction with the book, published last month by Viking Press, SUNYA is presenting a festival of Prokofiev’s music in concert and on film.

“I’m glad to be able to do something musical to tie in with it,” says Robinson, who had a hand in the programming of the two concerts.

Saturday at 8 PM pianist, William Jones is joined by a number of other artists at the SUNYA Recital Hall in a variety of Prokofiev’s chamber music. “Bill was very enthusiastic when he heard I was writing the book,” Robinson says. “And he supplied some of the material that’s in it. He studied piano with Alexander Barovsky, who wrote a nice personal portrait of Prokofiev in his memoirs. Unfortunately, those memoirs never got published, but Bill got a copy of them, in Russian, from Barovsky’s widow.”

As soloist, Jones will play Prokofiev’s Sonata No. 3 (“From Old Notebooks”) and selections from the Op. 12 collection. He will be joined by soprano Anne Turner in “Five Poems of Anna Akhmatova,” Op. 27, sung in Russian, and “The Ugly Duckling,” Op. 18.
Read more »
Posted by B. A. Nilsson at 10:29 PM No comments:

From the Food Vault Dept.: I haven’t been back to the Saratoga Performing Arts Center for several years, not since a Philadelphia Orchestra concert I was reviewing there was made miserable by a drunken group of rowdies. But many visits before then had their own fillips of misery thanks to the awfulness of the concession stands, run by Aramark, a huge corporate entity that is taking over the entire world of concessions, it seems. The stands were never well-staffed, the pricing was atrocious, and the food put Stewart’s offerings on a gourmet plane. It wasn’t always like that at SPAC. At least, not in 1990, when the following interview took place.

THE DIVERSITY OF SARATOGA’S SUMMER THRONG is summed up by the food these people eat. It ranges from burgers to banquets, from the costly hot dogs grabbed at trackside to the elegant spreads at the Hall of Springs.

Those banquets are put together by Hall of Springs Catering Manager John Piccolo, but he easily sheds the black-tie look for a grillman’s cap. “I’m constantly searching out the market,” he says, explaining this diversity, “to see what the customer wants. To see what I can add to the foods I serve.”

He’s been doing so in Saratoga for nine years, but he’s been in the restaurant business for over a quarter-century. “I had my own place in Albany, and my family owned a little corner restaurant in Schenectady a hundred years ago.”

Like another notable SPAC employee, Piccolo went to college to be an accountant but changed over to foodservice with an emphasis on banquet preparation.
Read more »
Posted by B. A. Nilsson at 7:38 PM No comments:

From the Vault Dept.: From 1871 to 2017, the Ringling Bros. and Barnum & Bailey Circus toured the world, an ever-changing spectacle that weathered the many changes in travel, venue, and audience expectation until animal-rights controveries helped shutter it five years ago. Gunther Gebel-Williams was the star animal trainer there for over 20 years. After he retired, he became the organization’s Vice President of Animal Care. He died in Florida in 2001. I interviewed during that final tour in 1990.

IT’S THE LAST TOUR for Gunther Gebel-Williams. The 119th edition of the Ringling Brothers and Barnum & Bailey Circus has been designed to showcase the man who has been the star attraction for 20 years – with a career that went back another 20 years in Europe. 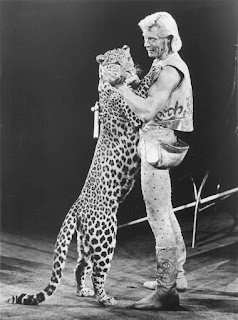 Who will replace him?

A lot of eyes are turning to Mark Gebel, 18-year-old son of the star. Gunther isn’t sure about completely turning over his mantle to the boy. Mark will take over the elephant and horse training when his father leaves the circus, but the tigers go back with Gunther to Florida. “(He) still has to get the trust to train tigers. He is still too young to do it himself,” Gunther says about his son. He’s worried, of course, about comparisons putting one or the other in an unjust light.

This retirement party began in late 1988 and will take in 92 cities before finishing in Pittsburgh in November. It adds one more city to the number racked up by Sarah Bernhardt during her two-year farewell tour in 1916.

And the Same to You

DUDLEY MOORE devised this piece for “Beyond the Fringe,” the 1960 revue that changed the face of comedy. As he tells it, he came up with it the night before opening night. I had the pleasure of seeing him perform it in the show “Good Evening,” which he and Peter Cook performed in the UK (where it was titled “Behind the Fridge”) and throughout the US. Here’s one of the better-quality YouTube versions.