HIS FIRST INKLINGS of the immediacy of Nazi atrocities took place in a neighborhood bakery, in 1956, where the four-year-old Bobby Rosen spotted the tattoo on the forearm of a woman working the counter and coaxed a whispered explanation from his mother. This opens an awareness of the ubiquity of such signs in his neighborhood, and why “A day never passed when I didn’t hear somebody express an opinion about the Nazis – usually my father,” a World War II veteran who was particularly infuriated by the sight of German-designed cars. “Yeah, we all hated the Nazis,” Rosen continues, “and if anybody didn’t, he kept his fool mouth shut about it.” 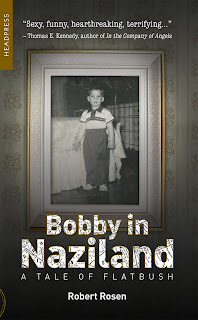 Bobby in Naziland takes an episodic stroll through a Jewish neighborhood that seemed stuck in its own kind of timelessness, colored by the multi-directional progression of prejudices reported throughout the book. Anyone who is German is, of course, a target, which for Rosen included his building’s super, Mr. Kruger (“My father called him ‘that damn Kraut’”). “We also routinely beat the shit out of his blond and suspiciously Aryan-looking twin sons ... who were my age.”

But there also were Catholics to despise, and Poles and Puerto Ricans. “It was garden-variety bigotry, inane and vicious at the same time.” What Tom Lehrer parodied in his song “National Brotherhood Week” played out for real in Flatbush, where “everyone ... I knew hated black people – Jew and goyim alike.” Although racial integration of the Brooklyn Dodgers made it seem as if the borough “were some kind of racially harmonious mecca,” in truth it was bad enough that the 1965 Voting Rights Act had to be applied to Brooklyn as well as the former Confederacy.

From the Opera Vault Dept.: We’re gearing up for summer opera season, so here’s a re-visit to a time, thirty years ago, when the NYC Opera performed in Saratoga Springs each summer. When the NYC Opera existed at all.


THE NEW YORK CITY OPERA’S opening production of their short Saratoga Performing Arts Center season this year was marred only by two adversities: the weather, about which no one is able to do much, and the perennially unkind acoustics, about which ditto.

Other than that, it was a glorious trip to that fancified Paris of “La Traviata” Wednesday night with a die-hard crowd that sloshed into the amphitheater to share in the magic of Verdi’s masterpiece.

Marilyn Mims and Walter MacNeil sang the roles of Violetta and Alfredo, the lovers whose affair, you get the feeling, is doomed the moment she starts coughing in the first act.

The opera is a soprano’s showcase, both in talent requirement and the skill with which the part is written. Mims did a lovely job transforming herself, during the first act, from a live-for-the-moment character into a woman seriously touched by Alfredo’s attention. She echoes the elements of two of his first act arias and then launches into two difficult arias, back to back: “Ah fors’e lui che l’anima” and “Sempre libera,” all of which was sung with strength, precision and a keen sense of grace.

FRANKLY, I AM NOT MUCH OF A HAND at machinery of any sort. I have no prejudice against it as such, for some of my best friends are of a mechanical turn of mind, and very nice fellows they are too. But the pencil sharpener in our office is about as far as I, personally, have ever got in the line of operating a complicated piece of mechanism with any degree of success.

So, when George suggested that he teach me to run his car, it seemed a reasonable proposition. Obviously, some one had to teach me. I couldn't be expected to go out and pick the thing up by myself, like learning to eat olives. No matter how well-intentioned I might be, or how long I stuck at it, the chances are that I never could learn to drive a car simply by sitting in the seat alone and fooling around among the gadgets until I found the right ones. Something would be sure to happen to spoil the whole thing long before I got the hang of it.

The car was, therefore, brought out into the driveway at the side of the house, like a bull being led into the ring for a humid afternoon with the matador. It was right here that George began to show his true colors, for he stopped the engine, which was running very nicely as it was, and said that I might as well begin by learning to crank it, as I probably would spend seven-eighths of my driving time cranking in the future.

From the Vault Dept.: It was pretty cutting-edge when I wrote about this melding of music and lights at the Schenectady Museum and Planetarium in 1987. Everything has moved on since then – including Raytel founder Alan Jackson, who co-founded an outfit called Voxon that’s exploring 3D volumetric display.

YOU SIT BACK AND OBSERVE the stars of a clear, dark night. The throb of music begins: drums, twangs and vocal of a Pink Floyd number. A red beam of light hits that sky, wiggles, expands to a shimmering beam, forms the pattern of a singing face. Behind it a mosaic of iridescent green winks in a changing geometry, a spider-web twisting to the beat. 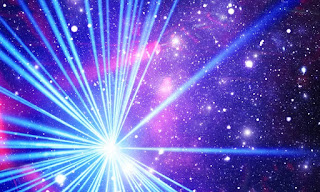 The sky is the inside dome of the Schenectady Museum Planetarium; the lights are the lasers of Raytel, a Troy-based company presenting a new Visual Music Festival at the Museum on Nott Terrace Heights at 7:30 and 8:30 p.m. Friday, Nov. 13, and continuing through the following weekend.

Alan Jackson, founder (and licensed laserist) of the company, began building robots when he was a child. “In 1976,” he says, “I was getting interested in building computers. At the same time I saw a laser show and decided that was what I wanted to do.”

He has combined his talents into the design and construction of the units that form the basis of shows that have been presented throughout New England and as far away as Arizona and Oregon.

WHAT BECOMES APPARENT as you examine the exhibition, Like Sugar, is that the exhibition is all around us, all the time. What Skidmore College’s Tang Museum has done is isolate a number of elements – sweet, bittersweet, and merely bitter – to resonate with our sugar-infested world, and remind us of its loathsome past.

“I’ve always been aware that sugar had a powerful draw for me,” says Sarah Goodwin, a Skidmore professor of English who helped organize the show. “It must have been a good twenty years ago, there was a women’s study group that used to hold brown bag lunches where we’d discuss something of interest to us. I proposed the topic of sugar, and there was a very lively discussion that day from different disciplinary perspectives. So when the Tang Museum was opened as an interdisciplinary space, about sixteen years ago, I thought we should do a show about sugar. But I wasn’t thinking about it being so informed by contemporary art. I didn’t realize how much there would be!”

From the Tech Vault Dept.: Once upon a time, the saving grace of laptop computers (in the days when laptop computers required somewhat more than a lap’s-worth of real estate, until they were supplanted by a form factor termed “notebook,” which now has pretty much taken over the laptop arena, with strong insurgency from the netbooks) was going to be the PC Card, or PCMCIA card, which fit into a standardized slot but allowed you to add a modem, network connection, GPS device, and even an extra hard drive. But components got smaller and USB came along. The PC Card now is a thing of memory – and a subject of my quarter-century-old piece below, written for Mobile Office magazine.

IN A RARE EXAMPLE of technology moving in complementary directions, the price of hard disks is dropping almost as quickly as the size of programs is swelling. The result: adequate disk space need not be a problem. 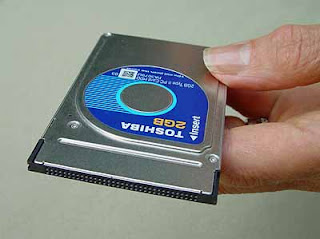 Unless you’re carrying a portable computer. A 200 megabyte hard disk seemed more than generous as newer, sleeker, faster machines emerged. Now, even with disk compression, those drives fill up far too quickly. Replacing the hard disk in a notebook computer is costly and wasteful – you’re left with an orphaned drive. Fortunately, another technology is also hurrying to keep up with the situation. The PC Card market is finally settling into something reliable and, better still, predictable. We’ve seen an efflorescence of modems and network devices in the PC Card form factor; now hard disks are joining the class.

The Personal Computer Memory Card International Association (PCMCIA) is the standard-setting consortium that established parameters of size and compatibility; their efforts are finally giving us cards that are truly interchangeable. Hard drives follow the Type III form factor of 10.5mm in height, allowing the manufacturers to fashion a complete but incredibly miniaturized unit complete with the rugged packaging needed for something that’s frequently handled.

Stranded on a Davenport

Guest Blogger Dept.: We deserve a visit from H. Allen Smith. He was a newspaperman in the 1920s, a Mark Twain devotee who won his own fame as a humorist in the 1940s thanks to his best-selling memoir Low Man on a Totem Pole and the many wonderful books that followed. I wrote about him here, when I went searching for his Alpine, Texas home. Here’s one of his Low Man stories. 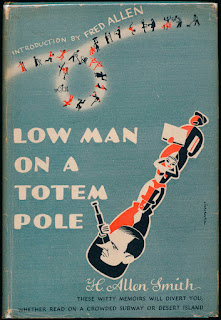 NEWSPAPER SHOPS, LARGE AND SMALL, accumulate fantastic personalities and weird behavior patterns. I once knew a Washington newspaperman who suffered from the delusion that Herbert Hoover had bladders on his feet. The first time I met him we were fellow passengers aboard the ill-starred Morro Castle in its maiden run from Newport News to New York. He kept calling me aside, telling me he had an important piece of inside information to give me if I’d promise not to print it. Then he would reconsider and decide to nurse his great secret for a while longer.

At last he came to my stateroom and after looking up and down the corridor to see that he had not been followed he stepped quickly inside, closed and locked the door and announced that he was ready to spill it.

“Herbert Hoover has bladders on his feet,” he said, spacing the words out for emphasis.

“How do you know he has bladders on his feet?” I demanded, pretending to be skeptical in the face of such a staggering statement.