THIS YEAR'S THANKSGIVING theme was French Country Bistro, an excuse for making as many casseroles as possible, thus sparing me a lot of a-la-minute work. This was partly inspired by the research I've been doing on cast-iron cookware (article to come), research that won me over to the joy of make-ahead slow-cooking. 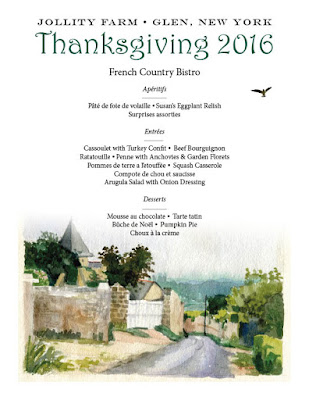 From the Culinary Vault Dept.: What with Thanksgiving looming, let’s skip dinner and move right into dessert – or make dinner a little more interesting with a look at the old-fashioned uses of that favorite fall gourd, the pumpkin, as I noted in a Metroland piece a dozen years ago.

IT’S NOT EXACTLY ON THE ORDER of Hallowe’en pumpkin smashing, but the noble gourd rated a mention in Shakespeare’s Merry Wives of Windsor as those titular wives plotted to humiliate the fat, randy Falstaff.  “Go to, then,” says Mrs. Ford, as her friends help her set up an assignation. “We’ll use this unwholesome humidity, this gross watery pumpion; we’ll teach him to know turtles from jays.” 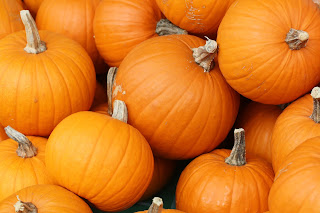 The Greeks called it a “pepon,” or large melon; this got Gallicized into “pompon” before Shakespeare got hold of it. Early American settlers changed the second syllable to “-kin,” itself a version of the German “-chen,” and still used as in instrument of maternal torture in such formations as “my little lamb-i-kin.”

For all that European travel, the pumpkin itself seems to have originated in Central America; certainly the recipes that have endured are known to have crisscrossed the American continents for several thousand years. Now it’s grown in every continent except Antarctica.

On a Folksong Kick

From the Vault Dept.: Singer-songwriter-guitarist Jim Gaudet has been a folk scene fixture for enough decades to earn every accolade available. When I saw him in 1990, he’d already spent a few years building a catalogue of original songs to replace the covers he started out with. These days he works in the company of the Railroad Boys (bassist/vocalist Bob Ristau and mandolinist/guitarist Sten Isachsen), with a bluegrassier sound, but the same gentle wit and bashful presence. The long-gone Peggy’s, however, abandoned its coffeehouse fairly quickly.

TO EFFECTIVELY REVIVE the coffeehouse spirit of 30 years ago means emphasizing stuff that’s bad for you. Coffee, for one thing, although it has its apologists (I’m one). Smoking – remember when such a club wore a pale blue haze? But it also can be done in song. Good thing we have singer-songwriters able to keep us aware of such hazards, and much more.

Peggy’s Restaurant took a trip back in spirit, and, it’s hoped, forward in time with its first program in a Coffeehouse Revival series Thursday night. Local artist Jim Gaudet played and sang a concert comprising his own material (for the most part), an easygoing blend of sentiment and humor.

First the hall: the bar area/dining room that overlooks the Canal Square courtyard already has something of a coffeehouse look to it. One wall is brick, there are paddle fans in the ceiling, the chairs are kind of rickety.

It’s not as acoustically benevolent, however. The room is reverberant – glass-topped tables, tile on the floor – and last night’s patrons weren’t all used to the idea of paying attention to a troubadour.

THERE’S NO GOOD TIME for a flood, but late August has to be the worst for a farming community. The Schoharie Creek ran up over its banks when Hurricane Irene hit during that time of year in 2011, punishing the area in and around the town of Schoharie with a disaster that killed livestock, ruined crops, and left homes and business under water. Along with governmental assistance came help from the community, and one group, calling itself Schoharie Recovery, plunged into the thick of the disaster with food for the displaced residents. It was a successful enough program to suggest that there was cause to continue even after the damage had been cleared, and Schoharie Area Long Term (SALT) Development was formed.

“Five years later, we’re still looking for new ways to move forward,” said Emily Davis, one of the dinner hosts. “The valley has always been oriented towards food. We have the Carrot Barn the Apple Barrel Country Store, and so many individual farmers.” With that in mind, SALT held its third annual Savor Schoharie Valley festival on Saturday, October 22, a blustery evening laced with rain that reminded us of the area’s seasonal volatility.

The festival is a fund-raiser that introduces people both to the county’s food and to its hospitality, and Davis was one of the hosts for the event, although it began and ended at Schoharie’s Lasell Hall. This is an imposing 18th-century tavern in the village center, a building now owned by the Daughters of the American Revolution who, several decades ago, established the town’s first library here, and who more recently restored the lower-level of the house from the damage it sustained in the flood.