We're back on stage! Malcolm Kogut and I will tread the boards at Steamer No. 10 Theatre (500 Western Avenue, Albany, NY) at 7 PM on New Year's Eve. Below is a promo video we made to celebrate the season. More info? Go to our Songs to Amuse website.

The Staff of Life

From the Cookbook Shelf Dept.: Every December, for many years, Metroland magazine would court advertisers by putting out buying guides. As the house restaurant reviewer, I chose my favorite cookbooks of the waning year, trying to avoid the excessively celebrity-driven. Here’s what was on my plate, so to speak, a decade ago. 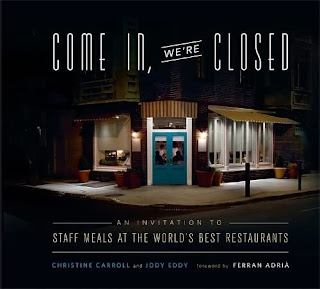 STAFF MEAL TELLS all you need to know about a restaurant. When the employees are fed with care and respect, when a family spirit is celebrated, a sense of well-being embraces everything about the places, and you feel it as a customer. This is why a chain restaurant feels like a Dickensian orphanage. Christine Carroll and Jody Eddy had the excellent idea of taking us behind the scenes to visit a couple of dozen staff dinners – with recipes – in Come In, We’re Closed (Running Press), although the first one, at Thomas Keller’s Ad Hoc, is a once-a-week staff banquet with a ritual requirement of paying compliments to one another, reminding me why I’ll never live in northern California. All of the chosen eateries are somewhat rarefied; thus, from Montreal’s Au Pied de Cochcon, for instance, comes “creamy smoked sturgeon pappardelle,” but that’s redeemed by McCrady’s, in South Carolina, and its offerings of a double-stack cheeseburger and beef-fat fries. Excellent narrative content, with insightful chef interviews as well.
Read more »
Posted by B. A. Nilsson at 8:13 PM No comments:

EVER CONTEMPLATED “CHUCKING IT ALL” and moving to a farm? Shrugging off the heavy mantle of living and working in the corporate world in order to get back to the earth sounds wonderfully noble and romantic, allowing you to glory in the knowledge that you’re providing healthy food for yourself and your neighbors. I know people who have done this. They knew they were in for a work schedule unlike anything they’d known in the nine-to-five world. They just didn’t anticipate how punishing it would be. 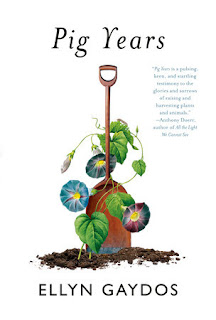 Ellyn Gaydos chronicles three years of active farm work in Pig Years, a poetic, insightful memoir that skillfully balances her personal growth with an honest account of the toil and turmoil of farm life. By the time the book begins, in the spring of 2017, she was no stranger to the challenges: At 18 she worked on a beef and dairy farm; the following year, on a berry farm. From there she went to another dairy farm, then to a vegetable farm. But, as Pig Years begins, “I had just turned twenty-four and fallen deeply in love, I had little money, was a transient worker, and was increasingly afflicted with the desire to have a child. All of this became like a conversation with the fields, animals, and various towns that surrounded me.”

I’m no fan of the type of memoir in which an eager diarist with little self-awareness chronicles an egocentric journey through what usually turns out to be the scorn of an unsympathetic world. This is emphatically not that kind of book. There’s no hand-wringing; likewise, there’s no feel-good cliché-mongering or strident preaching. But it is a story of growth and revelation. Gaydos tells it in a deceptively simple, matter-of-fact manner, her first-person perspective giving a sense of immediacy to the story.
Read more »
Posted by B. A. Nilsson at 11:51 PM No comments:

TRY TO RECALL a dinner or other social event at which you felt entranced, uplifted. You either were falling in love or listening to a fascinating party guest, the kind who has captivating stories to tell and knows how to deliver a punch line.

Susan Fleming Marx was clearly that kind of party guest. She quit a mediocre but promising movie career to wed Harpo Marx, and they had one of those marriages that defies statistics (and the matrimonial track records of Harpo’s brothers). 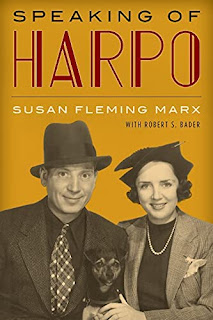 “To my mother’s lasting mortification, I was born in Brooklyn, New York. That was not classy,” is how she begins her well-told tale. She was born in 1908. As a teenager, she enrolled in Ned Wayburn’s School of Dance where she and her new friend Paulette Goddard were the favorites. Both were tapped to be in the chorus of a Ziegfeld unit that opened in Florida in January 1926, and by June of hat year, she was in a Broadway edition of the revue titled “No Foolin’” (which ran in a theater just down the street from “The Cocoanuts,” starring the Marx Brothers).

Just as quickly, she entered the movies. “There had to be at least a half-dozen girls in that chorus with a burning ambition to act. I was not one of them.” Nevertheless, she was selected by Adolph Menjou to star with him in his movie “The Ace of Cads.” “I’ve since learned that (it) is now a lot film. Well, thank heaven for small miracles! I’d shudder to think of anyone actually seeing me in this thing.”
Read more »
Posted by B. A. Nilsson at 9:42 PM No comments:

It’s not as if we were pandemic-demoralized; far from it. We’ve learned to live reclusively and are quite happy in this social cocoon. However, Thanksgiving invited us to re-think the holiday menu and treat our handful of guests to something rather unprecedented for this event: Szechuan Hot Pot, also known as Steamboat or Shabu-Shabu. The menu is below; our slide show of Thanksgiving menus past is here. 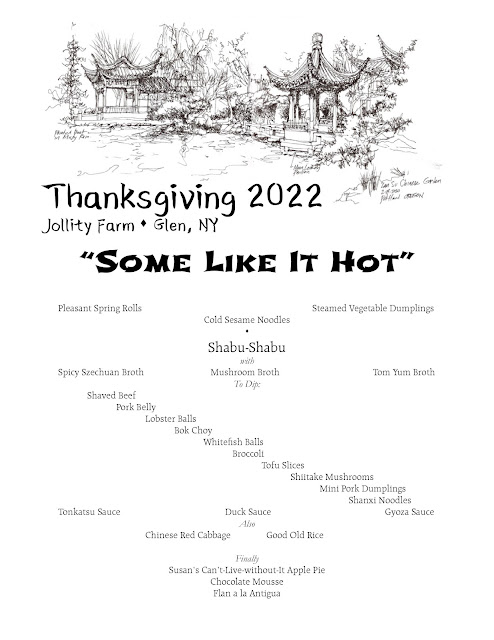 Making the Most of Mozart

From the Theater Vault Dept.: Back in 1984, when the University at Albany had a theater department of some standing, they offered an ambitious series of productions. Amadeus was still something of an undiscovered item until the movie came out that year, which coincided with the production described below, first in an eager advance, then in a disappointed review.

PIANIST ALFRED BRENDEL, a world-class performer of Mozart's music, dismissed the hit play Amadeus quite simply: “It’s not an accurate portrait of the man. The playwright took his material from a few letters Mozart wrote to his sister, letters that were very playful, and very scatological.”

Much of the music world, which isn’t known for restrained opinions, has come down hard on this theatrical depiction of one of the gods of music; the recent release of the movie has fanned the flames of controversy, with the dowdy New York Times leading the pack of throat-clearers.

On the other hand, a friend of mine who has long insisted that she’d rather be boiled in oil than listen to opera confessed that the opera sequences in the film of Amadeus weren’t bad at all! That kind of influence is worth the whinnying of a dozen stuffy newspapers.

There’s no doubt that the film plays up Mozart’s manic side, and it’s that very quality that SUNYA’s Bill Leone thinks needn’t be overdone for the theater: “Mozart is a man who knew his society, he just had moments of insensitivity.” Leone is following his recent success with Shakespeare at SUNYA with a production of Peter Shaffer’s Amadeus, which Leone will direct and (for half of the run) act in. Leone has described the themes of the play as ‘being about “uniqueness and irresponsibility of talent. The struggle between a man and his god.” It opens at SUNYA’s Lab Theater on Tuesday for a two-week run.
Read more »
Posted by B. A. Nilsson at 10:54 PM No comments:

The New Fable of the Speedy Sprite

Guest Blogger Dept.: We have heard your cries: “More Ade! More Ade!” And here he is, with one of the longer fables he was pleased to write following the great success of their too-brief predecessors. He got some extra mileage out of this one, as it also appeared in the Indianapolis Star under the title The New Fable of the Sprightly Sprite.

ONE MONDAY MORNING a rangy and well-conditioned Elfin of the Young Unmarried Set, yclept Loretta, emerged into the Sunlight and hit the Concrete Path with a ringing Heel. This uncrowned Empress of the 18th Ward was a she-Progressive assaying 98 per cent. pure Ginger. Instead of trailing the ever onward Parade, she juggled the Baton at the head of the Push. 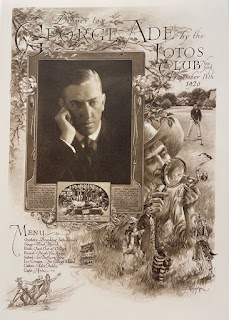 In the crisp introductory hours of the Wash-Day already woven into the Plot, Loretta trolleyed herself down into the Noise Belt.

She went to the office of the exclusive Kennel Club and entered the Chow Ki-Yi for the next Bench Show. At the Clearing House for K. M.'s she filed a loud call for a Cook who could cook. Then she cashed a check, ordered a pound of Salted Nuts (to be delivered by Special Wagon at once), enveloped a ball of Ice Cream gooed with Chocolate, and soon, greatly refreshed, swept down on a Department Store.

A Chenille Massacre was in full swing on the 3d floor, just between the Porch Furniture and Special Clothing for Airmen. Loretta took a run and jump into the heaving mass of the gentler Division. She came out at 10.53 with her Sky Piece badly listed to Port and her toes flattened out, but she was 17 cents to the Good. Three hearty Cheers!
Read more »
Posted by B. A. Nilsson at 6:33 PM No comments: