THE LAST PIECE I’D EXPECT TO SEE first on the program is Beethoven’s first violin sonata. In fact, I’m surprised to see this runt of litter anywhere, overshadowed as it is by the composer’s later works for the same instrumentation. It’s an example of Beethoven’s Mozartean roots, but it’s still Beethoven, and Anne Akiko Meyers mined it for its surprise and intensity.

Which was a harbinger of her approach to the works that followed. Her fascinating programming array otherwise was rooted in the 20th and 21st centuries, including pieces written at her behest.

Beethoven’s first sonata emerged from a tradition of letting the piano grudgingly share some of its sound world with the violin, although by the time he got hold of the form the partnership was gaining equality. The opening phrase features arpeggios that sound at home on both instruments, but the first movement’s exposition culminates in a chord-rich call-and-response that asserts the violin’s own identity – the more so because Meyers gave it no unwonted sentiment, even roughening the edges of the notes at times.

This was an effective contrast – and Beethoven’s music is all about contrast – with pianist Akira Eguchi’s role as a nimble virtuoso almost daring his music partner to keep up with his fleet-fingered fun.

From the Food Vault Dept.: I profiled Perreca’s bakery in a 1987 issue of Capital Region magazine, at which point I’d already been convinced that they made the finest Italian loaves to be had anywhere. This opinion hasn’t changed. I was delighted to see a restaurant appear as a bakery offshoot, and reviewed it in a 2010 issue of Metroland. But one of the hazards of the one-unannounced-visit approach is that you can catch a place at a bad moment that doesn’t reflect its true nature. I tried to draw attention to a problem without being overly negative, because I found plenty to enjoy about the place. But read to the end for more.

A POSTER ON THE WALL of More Perreca’s reproduces an article about Jack Nicholson’s discovery of Perreca’s bread while he was in Albany filming “Ironweed,” and the lengths to which he’d go to keep supplied. What never got chronicled (so you’re reading it here first) is that his onetime co-star Kathleen Turner also became a big fan of the stuff.

This was when a longtime friend of mine named Christine worked as a personal assistant for Turner, and took a couple of Perreca’s loaves back to Manhattan after a visit here. From then on, as long as Christine was in her employ, she was under orders to do the same after every such excursion. I even recall a time when I put a couple of loaves on a bus to the Port Authority Terminal, where Christine retrieved them.

Perreca’s bakery has been operating for nearly a century, turning out one thing only: bread. Dense, crusty loaves of Italian bread that have defined the way this bread should break and taste. The small North Jay St. shop offers a small selection of deli-type goods, including pizza slices, and the recently added cupcakes also have been a success. So it stood to reason that, as Schenectady’s Little Italy takes shape, they should add a restaurant.

But that’s almost too intimidating a word for what’s there. It’s like an outdoor café brought inside, airy and casual and with an engagingly retro feel – and there are a couple of sidewalk tables, too.

ROBERT SCHUMANN’S MENTAL VOLATILITY worked its way into the music he wrote not in a stormy Wagnerian way but as something that agitated in the heart of his romantic-era voice. His piano works erupt in storms of thick harmony, then lay back for the sparest of melodic sighs. His Fantasie in C, Op. 17, seems sometimes to boil with rage, even as that rage shimmers into exultation. Release yourself to the music and you’re buffeted along an emotional switchback that leaves you, as the final section eases to its end, drained and yet hopeful. 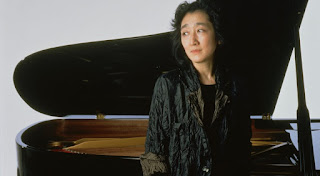 How extreme should those extremes be rendered? If pianist Mitsuko Uchida’s recent Schenectady performance is any guide, they can be contained within a context that never punishes the keyboard, and is all the more effective for that restraint. We’re asked to listen with 19th-century ears, and, once we surrender to that restraint, we enjoy an intensity of feeling rendered all the more intense by the claustrophobia of it.

Uchida performed as part of the Union College Concert Series, and she has reputation enough to inspire a long line of restive patrons to start forming an hour before the show, just filling the hall before it started.