TWO THINGS ARE HAPPENING on the stage of Catskill’s Bridge Street Theatre this weekend: Mary Shelley’s “Frankenstein” gets stripped to its dramatic, philosophical essence, and Steven Patterson gives the performance of a lifetime as he deftly portrays the many characters through whom we’re told this tale.

Patterson took on this tour-de-force a decade ago at the Orlando Shakespeare Theatre, whose artistic director, Jim Helsinger, fashioned the script. And the piece is an appropriate choice for the young Bridge Street Theatre, which seeks fare that’s off the beaten path, especially if there’s some moral complexity involved. We saw Patterson’s versatility in last summer’s “The Epic of Gilgamesh,” another one-man show, but “Frankenstein: The Modern Prometheus” pushes his characterizations to even more challenging (and successful) extremes.

The action plays out on a simple-seeming set of rough wood platforms and ramps that serve as shipboard, classroom, laboratory, dwelling, and even the mountains of Switzerland. An upstage curtain takes on a variety of colors and textures to accentuate the scenes, all of it the work of the theater’s Managing Director, John Sowle, who also directed. The superb sound design, by Carmen Borgia, set up atmospheric beds when appropriate, giving the sound of a ship creaking through ice or the birdsong of a meadow, and punctuated the action with appropriate effects.

BY THE TIME LESTER YOUNG hit the studio in 1936 to make his first recordings, the 27-year-old already had developed a significantly original sound – no easy feat in an era when many original tenor saxophone voices were busily redefining jazz’s boundaries. Coleman Hawkins was a few years away from revealing his more mellow side, while artists like Ben Webster, Barney Bigard, the short-lived Chu Berry, and audacious Bud Freeman were emerging from the pack. 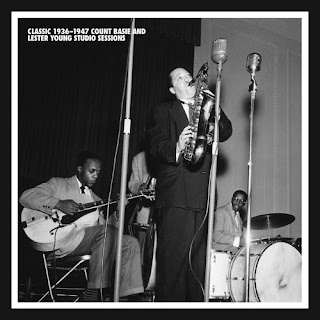 But Young was more different still, his rhythmic intensity dancing behind harmonically inventive solos rendered in a creamy voice. And he was helped, on this session, by a rhythm section so tight that they played as one person. The triumvirate of Count Basie, Jo Jones, and Walter Page packed a syncopated wallop in every bar they played even as their music seemed to stare at you through sleepy, half-lidded eyes.

“The first thing that you have to keep in mind as you listen to these four selections is that nothing like them had ever been heard before,” writes Loren Schoenberg, a jazz historian who also wields a mean tenor sax. “And in the young Lester Young there can be heard the reinvention of the tenor saxophone as well as the first recorded examples of a new vocabulary for jazz.”

In a Stew Dept.: I recently taught a very successful class about making French stews (at Different Drummer’s Kitchen in Albany, NY), one stew of which was Beef Bourguignon. So when Schenectady’s Daily Gazette asked me for a piece on some manner of ethnic cookery, I wrote the following.

THERE ARE MANY GOOD REASONS to revisit French cooking, and they don’t all involve butter and cream. There’s also alcohol.

Take the beginning of this recipe from Auguste Escoffier’s celebrated 1903 “Le Guide Culinaire”: “Lard the piece of beef along the fibres with large strips of salt pork fat which have been marinated in a little brandy ...”

That’s the first step in preparing his version of Boeuf Bourguignon, or Burgundy Beef, a peasant stew that acquired a fancier reputation once the likes of Escoffier got hold of it. Getting those nonprime cuts of beef to become tender and tasty is a challenge that’s usually met by slow-cooking it for a long time. (An exception is something like London broil, which achieves its tenderness mostly because it’s sliced very thin.)

What gives Beef Bourguignon (as it’s usually styled in English) its unique flavor is an overnight spent in a red Burgundy wine. This isn’t a marinade that tenderizes the meat — for that you need something more aggressively acidic, or with the kind of enzymes pineapple juice contains. As with most marinades, this one’s purpose is to enrich how the meat will taste.