From the Food Vault Dept.: A piece I wrote just last summer, celebrating a trendy place in trendy Troy, NY, yet it’s a place with none of the haughtiness you might expect. Especially if you’ve spent time in Brooklyn.

DON’T LET THE NAME OF THE PLACE FOOL YOU: it’s a Troy homage. “Most people don’t know that the name comes from the longest-running business in this building,” says Felicity Jones. “Superior Merchandise was a novelty toy shop in the ’60s, ’70s, and ’80s.”

It’s a storefront at 147 4th Street in Troy, and Jones co-owns building and business with Mike Romig. “We found an ad for the old Superior Merchandise in a Troy Record,” he adds. “The place was selling mood rings and mood earrings and mood necklaces.”

“And they had things like whoopee cushions,” Jones throws in. She was a freelance graphic designer before tackling this retail project four years ago, and brings her design sense to the clean, colorful look of the place, where handsome, hand-picked items await your scrutiny.

Jones describes them as “everyday objects that are useful, beautiful, and super-well designed. To make your everyday experiences more special. We have scissors, toothbrushes, pens – simple objects you use all the time, but you won’t find in the regular stores. Ninety percent of the things are from individual artists and makers that I personally want to support.”

I WON’T BE WATCHING THE OSCARS, but I usually don’t. A long-ago trauma put me off the show, which is really a case of blaming a blameless entity for my own shortcomings. That the incident took place in 1975 only proves how pathetically long I hang onto such things. I was in my first (and final) year of college, an arts school near White Plains, and had been persuaded by a new-found friend named Rick to join him in Manhattan for an Oscars-viewing party during which I'd also be able to show off my bridge-playing prowess, he said.

My parents played bridge. It was a ritual I witnessed from earliest childhood, when they’d click down the legs of the table thus intended and sit with another couple – the cast changed over time – to commence the bidding and playing and smoking and drinking. It seemed to be a very dull game, the most attractive feature of which was the fan of cards each player held, arranged by suit and rank (the cards, not the players, although now that I think of it I can’t be sure).

Although my mother tried to teach me the game, it wasn’t until late in high school that a few of us discovered the shift from poker to bridge, bringing a lot more skill into play. Now it became something filled with high emotion and attendant swearing, which made it much more appealing. And so I sought to pursue this interest in college, and ended up meeting those players in Manhattan.

Jumps in the Mouth

From the Food Vault Dept.: There’s a small eatery on Schenectady’s Erie Boulevard that for many years – at least through much of the 1980s – was an Irish pub called, amusingly, the Electric Grinch, thus saluting the mammoth edifice of General Electric that hovered a couple of blocks away. Then it went into a series of changes through a series of owners, who fought a series of indignities like tax problems. My first visit to the place as a restaurant reviewer was in 1990, as I made my return to that chair after a year-long hiatus. I was quite the enthusiast, wasn’t I?

SOME LOCATIONS SEEM MADE TO ORDER for a good restaurant business, and Schenectady’s Erie Boulevard, guarded by GE at each end, is a natural. But such businesses have come and gone over the years, struggling to survive when they should be in the punk.

Saluti has been there for the better part of two years now, offering a menu of Italian specialties that nicely complements the many other Italian restaurants in this city. I haven’t toured the others in a while, but the food at Saluti’s may come dangerously close to being the best of them all.

It’s a place with a split personality, which probably helps it endure. On the one hand, it’s very much a bar, with a large, loud TV dominating the bar area. On the other hand, it’s a restaurant with an elegant menu. Bar and dining room are separated by sweeping brick archways. The room has fewer than a dozen tables. If you’re more comfortable at the bar, you can have your dinner served there.

From the Vault Dept.: Here’s one of the most unusual (for me) pieces I’ve cranked out over the years. Many years ago, a friend had taken a job editing a magazine specific to the pharmacy industry, and asked if I’d write about the pharmacy technicians. This I did, and at a decent rate of pay. There remains debate about this profession, so don’t take this as an endorsement. It’s more of a study in how much detail I can absorb, write about, and then forget. 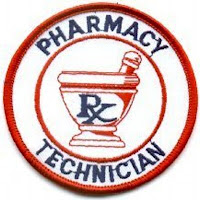 WE TAKE THOSE DIPLOMAS on the wall for granted, but for many years there has been no diploma for the person who works alongside a licensed pharmacist. The personnel cutbacks that some forms of managed care have led to, especially in chain drug stores, is prompting increased use of that unlicensed pill counter, the pharmacy technician. Giving new life to an old fear that techs could cost credentialed – and therefore costlier – pharmacists their jobs. Even worse is the fear that techs, let loose upon hospital corridors, could dispense the wrong medication altogether. Stories of just that kind of incident persist, although in each case responsibility ultimately falls to a pharmacist. Still, it's easy to point an accusatory finger at a technician.

"You’re always going to hear those anecdotal things," says Patricia Harris, executive director of the California State Board of Pharmacy, "and pharmacists are always going to lose jobs if they’re not capable, and then they’ll blame anyone and anything." Harris oversees a system that includes statewide registration of technicians, "but it’s not competency-based. We’re having an informational hearing at an upcoming board meeting on the issue of certification, to try to figure out where we stand on that process."

From the Food Vault Dept.: I lunched at the Redwood Diner not long ago and am happy to report that it just as accommodating as it was when I wrote this piece seven years ago.

IT WAS MY FIRST-EVER VISIT to this longstanding restaurant, and I felt as if I’d walked into somebody else’s house. Somebody very gracious, someone who’d been expecting me – but someone with a large, extended family who were enjoying the already-in-progress party.

"We’ve been here 33 years," says Gloria Adrikopoulos, who owns the Redwood Diner with her husband, Peter. "We have a lot of friends in the neighborhood."

I’m shocked to realize that I’ve been in this area for most of those years, yet never stopped in before. Now, as a result of that visit, I will be stopping in again. I’ve been adopted. Along with my family.

This friendliness is a little surprising. Or, to put it a more honest way, I’m instantly suspicious of such quick friendliness from anyone. I fear that the person is about to pitch Herbalife, or is simply insane.

Do You See What I See?

WENDELL BERRY HAS BEEN THE CONSCIENCE of rural America for several decades, presenting a cohesive, considered response to the over-industrialization of our lives. He has done so through his essays, novels, and poetry, while living a life as a Kentucky farmer with a deep connection to the land that allows him to put his beliefs into practice. 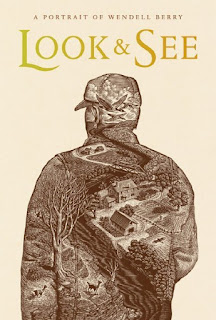 In the fall of 2016, Wendell Berry and his colleague Wes Jackson delivered the annual E.F. Schumacher lecture at the Mahaiwe Theatre in Great Barrington, the cultural heart of the Berkshires in western Massachusetts. Their analysis of our perilous state was provocative.”What screwed us up,” Berry said, “was oceanic navigation, because it taught us to think that if we didn’t have it here we could get it somewhere else.”  Commitment to a community and a place is necessary in Jackson’s words “for affection to grow and intelligent action to take place to address what is needed in a community.”

This 2016 appearance in the Berkshires raised expectations for a long-awaited documentary devoted to Wendell Berry: “Look & See, A Portrait of Wendell Berry,” from executive producers Robert Redford and Terrence Malick. Retitled from “The Seer” because Berry expressed misgivings about being identified in the office of prophet, it was anticipated that the film would provide a means for introducing Berry to a much wider audience than his many admirers.

From the CD Shelf Dept.: The admirable show- and movie-centric label DRG reissued a pair of Noël Coward albums back in 2003 – albums originally recorded in the 1950s and released on Columbia, but, as I wrote below, there was more to be heard, and it finally was here.

COVER ART ALONE attests to the journey these recordings have taken. Originally issued in the mid 1950s as two LPs, the first cover featured a suave, teacup-wielding Noël Coward on the Las Vegas desert; the second, created in the wake of the other’s success, relocates that image to Manhattan. Columbia later LP-issued the two as a gatefold set, with an older Coward pictured at “Firefly,” his Jamaica home; the first CD issue improbably pictured the 30s-era Coward. 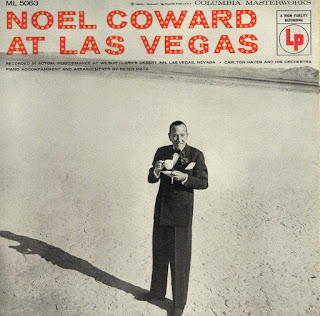 The already truncated program was further shortened for a single CD. DRG now has issued the program on two CDs, both brief, with the original covers, and for the first time we’re able to hear the Las Vegas program as it was originally performed. Turns out the intro was faked and some of the songs were cut. DRG sent its engineers to the original tapes, and they’ve included all available material. Also, you’re finally hearing the whole thing in as decent sound as was possible to achieve.

As a studio recording, the NewYork set was as good as you’d get in the mid-50s, although it’s characteristically Columbia high-end harsh. The muddier Vegas recording requires a few moments of ear adjustment.

This blog would like to take a moment to salute the 117th or 118th (there is a small, flickering dispute out there) birthday of Jascha Heifetz. YouTube has become crowded with opportunities to see and hear him play, but how about some Paganini?