From the Vault Dept.: Here’s another in a lengthy series of workaday pieces I churned out over the years, a preview of such arts events as I covered for the summer of 1987, written for the Schenectady Gazette. It’s a fairly cursory run-down, but it accompanied detailed listings in very tiny type. But this harkens back to a time when the Philadelphia Orchestra’s Saratoga residency featured new works and a composer-in-residence, when the NY City Opera also visited the area, and when the Latham Coliseum still existed – and Perry Como still existed, too.

EVEN AS VISIONS OF ICE CREAM CONES dance in your head, summer promises warmth and relaxation. And entertainment, heating up all the more the conflict between those who like to be disturbed by their entertainment and those who wish merely to be distracted.

This summer, the area offers both, leaning, not surprisingly, towards the latter.

The area expands as the days grow longer, so that what in winter would be a trudge to Massachusetts becomes instead a delightful trip to Tanglewood. Places like Woodstock and Cooperstown and Dorset, VT., figure into our itineraries.

Not to shortchange the close-to-home activities: they’re fewer, but they’re exciting. The Saratoga Performing Arts Center is bringing in William Bolcom as composer-in-residence this summer, a man who made a name for himself as a ragtime pianist but began composing, according to one biographer, “at a disgustingly early age.”

From the Food Vault Dept.: In the restaurant business, Mother’s Day is the busiest while Father’s Day typically is a walk in the park. Restaurant people know where your loyalties lie. Were I to venture out to dine on Father’s Day, however, I’d want to go to Don and Paul’s, described below in a 2011 review I wrote just before Thanksgiving. Prices probably have changed since then, but not much else.

IF YOU BREAD IT AND DEEP FRY IT, they will come. I watched with fascination as the booths and counter cleared of a busy round of customers and the restaurant seemed to take a deep breath – and another wave came through the door and filled the counter and booths again. And all the while plate after heaping plate dinner items flew out of the kitchen. It was about 7 PM on a recent drizzly evening. The place couldn’t have seemed more homelike.

“Are you from out of town?” asked our server. Not confrontationally: it was a question born of justifiable curiosity. We were strangers to the place, and I’m guessing strangers here lose their strangerhood quickly.

Don and Paul’s is on Waterford’s main drag. A tattoo parlor, a martial arts school and a Chinese restaurant nestle nearby, as do other eateries. It’s a welcoming vista on an evening-darkened street.

Inside seating choices are counter stools and tables and booths. You holler your choice above the din of a television, a back-room billiards game and the many conversations in progress.

THREE CHORDS UNDERLIE the Blues, the same three chords that inform much of the more popular examples of western music. In a Blues song they pass in an inflexible order in an inflexible structure. But they’re subject to torture en route. Notes in the chords and notes in the scale are twisted and cry out in pain. The lyrics, too, are fairly inflexible: two lines of iambic pentameter, the first one repeated, that are supposed to rhyme but pay scant attention to Clement Wood’s rhyming rules.

The Blues are the foundation of American music. They have an easy-to-overlook history, but anyone alive who has listened to any amount of music instinctively knows the form, which has saturated every possible genre.

Within the confines of the Blues, there is room, and plenty of it. Room to play with a lyric, room for call-and-response, room for rhythmic figuration. Like all great blues singers (I’ll drop the cap now), David Bromberg is comfortable with all that room around him. He makes a mansion out of it, with vocal inflections and guitar licks that skillfully serve the song. And the rest of his ensemble is right there with him.

Take “Walkin’ Blues,” a number associated with Robert Johnson. “Woke up this morning, feeling 'round for my shoes,” sang Bromberg, in concert at Skidmore College last Friday, as guitarist Mark Cosgrove laid down accents behind him. “You know by that, I got these walkin' blues.” As he repeated the line, Bromberg added bottleneck responses, compounding a sense of rebellious misery. 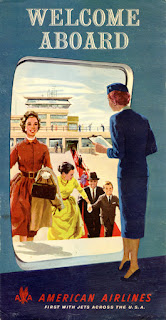 IN 1959, THE DAY AFTER my third birthday, my father flew me from our home in Cincinnati to visit his parents in Astoria. We traveled on a DC-7 Flagship, a jewel of the American Airlines fleet, from Greater Cincinnati Airport to New York's La Guardia. I have but the haziest memory of this flight, so I'm grateful that my father kept a giveaway booklet that he passed along to me a couple of years ago. It now stands as a compelling reminder not only of the world of commercial aviation back then, but also the world of family and business travel. Remember: don't fire up that Chesterfield until the Captain extinguishes the No Smoking light! 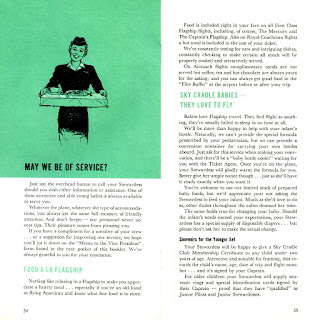 To read the pamphlet in its entirety, click here for a PDF. Bon voyage!