Out in the Cold

A YOUNG MAN, spurned by his beloved, sets off on foot across a chilly winter landscape, exploring a range of volatile emotions as he surveys the countryside. Dogs bark at him as he halts by them; a cemetery casts an inviting spell. These are elements of Wilhelm Müller’s “Die Winterreise,” a cycle of poems set to music by Franz Schubert in 1828.

Tenor Ian Bostridge, a frequent “Winterreise” performer, combined personal impressions of the work with an insightful historical and philosophical overview in his book Schubert’s Winter Journey, wherein he notes that it’s “Odd ... perhaps, that we always give the cycle in a warm hall, that we never feel the cold or live in the silence of the snowy landscape. How often do the audience really imagine it? Should it be part of the recipe?”

We got the answers on Saturday, Feb. 11, when baritone Christopher Herbert gave a brilliant performance of “Winterreise” in Saratoga’s Spa State Park – outdoors, in the snow, clad in duffel coat, boots, and watch cap.

All in the Family

A BEAUTIFULLY ACTED, cracklingly funny study of some of the indignities of dating had its world premiere at The REP last week, shrewdly melding two disparate demographics through a story that probably plays out in one form or another in many a family: the search for love after the death of a longtime partner. 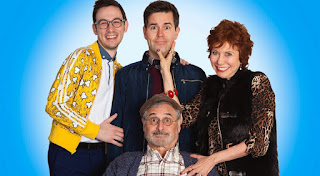 Sol Katz (played with irascible cheerfulness by Barry Pearl) isn’t so busy mourning his just-deceased wife that he hasn’t time to ramp up a romance with bridge partner and longtime friend Edie (Cheryl Stern) – to the horror of his son David (Brian Sills), who deftly undermines the relationship.

Bob Morris, who has written often for the NY Times Sunday Styles section among many other publications, captured this autobiographical story in his memoir Assisted Loving; adapting it for the stage has given him the opportunity to broaden characterizations beyond the confines that memoir imposes, inviting us on a two-hour journey through some difficult and compelling character developments.

THE FANTASTIC FOOLISHNESS of Groundhog Day has been worsened for me since my early teens, when I fell under the spell of violinist Jascha Heifetz and soon realized that my coevals didn’t know who he was and had little interest in sharing my enthusiasm – and chattered each February 2 about a rodent in Pennsylvania.

Heifetz was born in Vilna, Lithuania, on this date in 1901 (some say 1900), studied in St. Petersburg with the renowned Leopold Auer, from whose school enough famous violinists emerged to prompt George Gershwin (a Heifetz friend) to write a song in 1921 titled “Mischa, Jascha, Toscha, Sascha,” a tribute to the renown of Elman, Heifetz, Seidel, and Jacobsen. Heifetz made his American debut in 1917, became a citizen of this country soon thereafter, and concertized and recorded into his early 70s, when he decided he couldn’t maintain his own high standards.

He shares a birthday with Fritz Kreisler, another extraordinary fiddler, but my household celebrates the Kreisler birthday on February 1. In lieu of cake, I offer a morceau by Mozart: