Words of a Feather

PERFORMING IN AN OPERA CAN’T BE EASY for any of the participants, but my vote for the hardest-working cast member in Rossini’s “Thieving Magpie,” receiving what amounts to its American premiere at the Glimmerglass Festival, is choreographer Meg Gillentine. As the title character, she moved among the audience gathered on the pleasant lawn before the show, never breaking from her avian persona, and she helped music director Joseph Colaneri conduct the overture (not that he needed it) before she took her place in an ornate onstage cage as the opera proper began. Her costume and makeup certainly helped reinforce her birdlike look, but her eyes had the fiery intensity of one who’s up to no good.

“The Thieving Magpie” is rarely performed – the company believes this to be its first Italian-language production in this country – and, compared to Rossini’s greatest hits, it’s pretty lightweight. But it’s nonetheless a charmingly accomplished piece that rewards excellent singers with fabulous solos and ensemble work.

The tale is slight. Ninetta, a servant, is accused of stealing silverware. Although she and her employers’ son, Giannetto, plan to marry, she is to be imprisoned. Despite the possibility of a reprieve, she thwarts the advances of the evil Mayor, which means she’ll be put to death. This kind of story, termed opera semiseria, seems to confound a modern audience. It’s the theatrical version of mixing savory and sweet, a practice more common in a 19th-century dish than in contemporary fare.

AS WITH ANY RACIALLY CHARGED SUBJECT, there are many contexts in which “The Merchant of Venice” can be viewed. Jews were still barred from Shakespeare’s London, and the rich, complicated anti-Semitism of the time had just been jogged by the execution of the Queen’s physician, a converted Portuguese Jew accused of plotting against her. I’ve seen several recent essays of the play that defines the context of the analysis as “in a post-holocaust world,” which remains our inevitable lens, but some manner of holocaust has been going on for centuries, inviting varying degrees of awareness.

In Shakespeare’s time – and well beyond – there was a stock-character Jew that could be relied upon to provoke hisses and laughs. He is an unnamed figure in one of the stories told in the 14th-century Italian collection “Il Pecorone,” but he specifies a pound of flesh as the penalty should Ansaldo (Antonio in “Merchant”) default on a loan.

But in expanding this story, Shakespeare made more dramatic sense of its elements. The unnamed lady of Belmonte became Portia, and her annoying habit of drugging suitors and stealing their goods changed to the situation wherein her suitors could win her only by choosing the correct of three caskets. Most importantly, Shakespeare humanized Shylock, his Jew, offering a more fully realized character driven by circumstance to seek his bloody revenge.

From the Food Vault Dept.: I’m pleased to see that Minissale’s Wine Cellar Café still is going strong at its perch on the edge of Troy’s 14th Street. My wife and I recently were reminiscing about the finer family-oriented eateries we’d visited during my years as a restaurant reviewer, and recalled this meal with pleasure. I've updated the hours below, which changed since the piece was written, but left the text intact, so don't plan on stopping by on a Wednesday.

THERE’S THIS PIZZA THAT’S BEEN ELUDING ME. It’s the one I share with my family, in an alternate universe in which my wife embraces pepperoni for the life-giving substance it is, and my daughter sees the thick, white-wheat crust as similarly salubrious.

We were daughter-free on our visit to Minissale’s, and half of a menu page temptingly described the special pizzas they offer. The Augustus Caesar ($12/$18.75) promised the pepperoni, along with salami and garlic. Although my wife would never go for the Enrico Fermi ($8.20/$12.90), with its promise of “atomic” hot pepper sauce and plenty of hot peppers besides, perhaps the Dante ($9.45/$14.85), tempering hot peppers with their sweet brethren, would work. There’d be no problem with sausage-and-sweet-pepper strewn Dean Martin ($9.45/$14.85), and there’s always the build-your-own option, laden with choices.

Then we looked at the rest of the menu, heard the specials, and went off in completely different directions. Pork ossobuco sang but one of the siren songs.

PIANIST LINCOLN MAYORGA has been championing the music of George Gershwin with virtuoso accomplishment over the course of a long career, essentially picking up where Oscar Levant left off, but without the neurasthenia. But Mayorga is much more than a Gershwin specialist. Early-career piano soloists tend to get a lot of “Rhapsody in Blue” work en route to the European repertory, sadly affirming a received notion that Gershwin’s music is “light” music – and, by extension, that American music, unless it sounds European (MacDowell’s, Chadwick’s, e.g.), just ain’t as good. 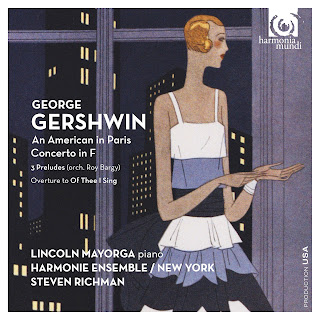 That’s not what Mayorga is doing. If he pays more attention to American music – which includes the most compelling body of song since Schubert – it’s because he’s long been at home in that vernacular, performing professionally in radio orchestras and recording sessions that included work with Phil Ochs and Marni Nixon, among many others. He is a composer – he wrote music for the TV show “Fame,” and he’s a writer of popular songs and instrumentals. I first saw him in performance many years ago as partner to violinist Arnold Steinhardt, deftly exploring the classical repertory, and then was amazed to discover that he was a founder of the high-end record label Sheffield Labs, one of those rare entities that guarantees good listening by virtue of its reputation alone.

Mayorga has found a sympathetic partner in conductor Steven Richman, whose work with the Harmonie Ensemble / New York is the American equivalent of early Nicholas Harnoncourt recordings: they seek to redress the decades of well-meaning but wrong-headed re-interpretations of classic scores. Although it now seems heretical to suggest that Bach’s orchestrations could be bettered, Gershwin’s road to respect remains impeded by “improvements.”

WHY WOULD AN OPERA AND THEATER DIRECTOR – a director with a long, long list of credits, thus implying a successful career – saddle a masterful work like “Sweeney Todd” with a concept so misguided and a succession of staging choices so at odds with the piece that the work is rendered painfully unwatchable? Christopher Alden’s version, which opened last Saturday at the Glimmerglass Festival, succeeds in what I’d think would be the difficult task of doing to “Sweeney” what Sweeney ends up doing to his customers: carving the life out of it.

I doubt that it’s out of any overt contempt for the material, but there’s a sneaky subversive process that afflicts the creative, especially in theater. The Dunning-Kruger effect describes the tendency of those with relatively lower skill levels to believe that they function with far more accomplishment than they do. Couple such a lack of perspective with the anti-intellectualism that characterizes too much of American culture and you easily can end up with “high-concept” approaches to theatrical works that serve to betray a creative team’s lack of creative intelligence.

It’s long been an epidemic with productions of Gilbert and Sullivan operettas, which too often are “improved” by directors ignorant of the origins of the works and unwilling to trust the integrity of the well-established words and music. The most obvious betrayal of this phenomenon shows in rewrites of Gilbert’s lyrics that display no understanding of the basic principles of rhyming, let alone the wit to top what’s already there.

COMPARING CONTEMPORARY NEW YORK CITY with Belle Époque Paris is convenient insofar as income disparity obtains, and living conditions for artists still require great sacrifices. But we don’t see much death our daily lives, an insulation that gives a story like “La bohème” a touch of remoteness. But not much. Packing the rest of its canvas are the big emotions: Love, jealousy, ambition. “Opera is big, bigger than the spoken theater, bigger than life” said Leonard Bernstein in his wonderful 1958 Omnibus program “What Makes Opera Grand?” “And what makes it bigger? Music, sung music.”

Discussing the opening of the third act of “La bohème,” Bernstein notes that it’s “not exactly a plot to set the world on fire.” But, after it’s performed to music, he asks, “Do you find yourself caring about the story? Of course you do. Why? The addition of perfectly glorious music. But it’s not just any glorious music. It is carefully planned by a theatrical wizard to take the characters and magnify them for us.”

Emotions are big, conflicts are simple, characters are drawn in deft, quick strokes. How best to suit this 120-year-old opera, considered a masterpiece by most? In the manner chosen by the Glimmerglass Festival to open its current season: big, simple, drawn in deft, quick strokes. It’s not a present-day piece – that’s the business of “Rent” – but it still packs a wallop when the production lets you believe that it speaks for itself.

The State of the Stage Dept.: A friend read my recently exhumed overview of the 1987 summer arts season, which skimmed over what would be happening in and around New York’s Capital Region. He, too, was skimming, and thus was alarmed to that different shows had been announced than he was expecting to see. So let’s clarify some of those seasons with a look at what will be performed around us in the weeks to come. In 2016.

Opera Saratoga, which is in residence at the Spa Little Theatre at the Saratoga Performing Arts Center, is presenting Mozart’s “The Marriage of Figaro,” with remaining shows July 9 and 15; the American premiere of Philip Glass’s “The Witches of Venice” (remaining shows July 11 and 17); Daniel Catán’s “Il Postino” (July 7, 10, and 16) and a one-night-only “Evening on Broadway” (July 14). More info: operasaratoga.org.