Vintage Stuff Dept.: On Nov. 10, 1987, Soupy Sales appeared at Albany's Comedy Works, presenting a long set of song and shtick. I grew up watching Soupy's show, a low-budget barrage of puns and anarchy that taught me early on how unreliable the adult world could be. Clearly, Soupy had made it his peculiar form of adulthood with his kid sensibilities intact, and it inspired me to try to do the same. Here's the review I wrote of his Albany show. How nice to discover that he was still as much of a kid as ever. 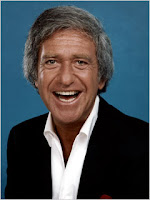 “My kids have grown up!” Soupy Sales declared on the stage of the Comedy Works on Tuesday night.  He gestured to the small crowd of fans – people in their 20s and 30s – who had gathered on a snowy night to see the man who made “The Mouse” a million-seller back in the ‘60s.

His kids, those who remember the TV show in which Soupy delivered an endless stream of puns and sight-gags, may have grown up, but Sales hasn't. Even his bluest jokes have the ring of a naughty child's voice behind them, and that's really his appeal. Like any good clown, he has a unique style. And in his case, it's that of an energetic, risqué kid.

And it's still a stream of puns, old jokes, rewritten song lyrics and crazy free association. “People ask dumb questions,” began one routine. “They see you snoring on the couch and say, ‘Hey, are you asleep?’” (Musical flourish from the keyboard.) “You say, ‘No. They're showing little movies on the insides of my eyelids!’” (Flourish.)

One after another, the wisecracks tumbled along. At times he’d move into the audience, setting up this person and that for a gag or corny routine.

And, again in the best clown tradition, he has no shame. In these oh-so enlightened times we move cautiously to avoid smacking of intolerance; not Soupy. But his jokes have the strange dignity of being timeworn, and the humor comes not so much from the gag itself but from timing, delivery and the sheer number of them.

He did a takeoff on Julio Iglesias; he rewrote a Randy Newman song to insult “Tall People.” He discussed the need to smile and somehow worked it into a shtick about visiting his hometown, “which is so small that a night on the town takes four minutes. It's so small that the picture postcards are views of other towns.”

Then he asked, “Do you want me to talk about my TV show?” and recounted the saga of the adlib, on New Year's Day in 1965, that got him suspended for a week. With a minute of airtime to fill, he told the kids to sneak “those green pieces of paper with pictures of old men with beards” out of their parents' pocketbooks and send them to Soupy. Netting him $80,000.

“And I'm convinced that's where Jim and Tammy Bakker got the idea," he complained.

His longtime club partner, pianist Paul Dver, provided a steady accompaniment both for songs and gags, and worked well as a foil for some of Sales's more obstreperous insults.

With a final chorus of “The Mouse,” (“It may not mean much to you but it kept me out of the service,”) he did the Soupy Shuffle to end the show.