Who You Gonna Call?

Vintage Technology Dept.: I'm assuming that cell phone service in the Adirondacks has improved in the decade since I wrote this piece. Even as I placed the first pay-phone call described below, I had the sense that the experience would be laughably nightmarish and began taking notes. The follow-up calls were fun, too. This originally appeared in Metroland Magazine. 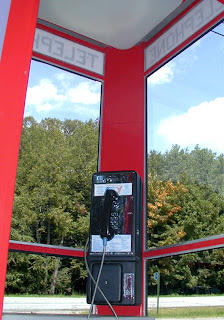 “Operator! Get me the police!” The aggrieved caller jiggles the switchhook while clutching a bakelite handset. It’s a great old-movie image of urgency, followed immediately by an undercranked shot of cop cars rounding a curve.

As a kid, I was instructed to dial 0 and tell the operator where the police were needed. I never had occasion to try it back then. But I did last week, and that simple gesture has a rugged enemy in current technology. Here’s what happened:

My family and I spent a few vacation days in the Adirondacks last week, and stayed one night at the pleasant Cedar Pond Campground in Newcomb. We were given a space that adjoined a schoolyard so our young daughter would have access to the playground.

As the sky darkened, we kindled a small fire at the campsite and watched the evening’s mosquito squadron descend. My daughter drifted into somnolence; Susan soon joined her in the tent. As I prepared to turn in – it was about 10:30 PM – the roar of an unmufflered car heralded the arrival of a group of boys at the schoolyard, which erupted into a loud and very annoying basketball game. Yeah, I should have just walked over there and reasoned with them, but I was tired and grumpy. I switched on my cell phone and ... nothing. No service.

So I hiked to the pay phone near the campsite entrance.

It’s one of very few pay phones along this stretch of 28N. Near the coin return is printed the usual Public Service Commission-required info, which soon would become very important to me. But for call number one I simply pressed zero. “Operator,” a woman replied.

“Could you connect me to the police?” I asked.

“Where are you?” Of course: there’s nothing local about an operator these days, and it turned out that I was talking to someone in Indiana. She advised me to call directory assistance to get the number.

Fearing a hefty charge for directory assistance, I had another idea. Although mine wasn’t an emergency call, I hoped that the 911 dispatcher might give me a phone number for the local police. Call number two: “911. What’s your phone number?”

That caught me off guard. “Uh – I’m in a phone booth,” I said. “And there’s no number printed anywhere.”

“I can’t help you without a phone number.”

“Find another payphone,” the dispatcher barked, and hung up.

Pissed off, I punched in 911 again, this time discovering that, no, they couldn’t give me a local police number – they were in Manhattan. And nobody I’ve spoken with since has been able to identify this 911 service company. Verizon (the former Bell Atlantic), which provides the line for operator assistance, claims no responsibility. Ditto for Opticom, the operator- and directory-assistance provider. A spokesman for the Texas-based long-distance provider, ILD, said that all of their operators were in San Antonio, “and they don’t hang up on people.”

New York Pay Phone Systems, which installed and maintained the phone, is based in Ballston Spa. “If there’s a problem and I can fix it, I’ll fix it,” Marcel Adams told me, but the business of 911 isn’t in his hands. “Before we can get approval for a pay phone, it has to be equipped to display its number to any 911 service,” he said.

Back to my dilemma. I discovered that 411 calls are free, so I sought the number of the police. “What city?” the recorded voice inquired. “Newcomb,” I said. “What listing?” “Police.” A few clicks later a human came on the line. “There’s no listing,” she said, sounding totally unsurprised. “Is this an emergency?”

No, I assured her. Then I realized that, as in my own rural neighborhood, police service probably comes from the county sheriff’s office. “What county are you in?” she asked. Yipes. “Essex, I think,” I said. And, as you’ve already guessed, listings weren’t available by county. “I need a city,” she said. Nothing under Newcomb.

How she finally dug up an Essex County Sheriff’s Department listing I do not know, but Doug Wilson, a spokesman for Opticom, explained that emergency service numbers for a locality – particularly one that isn’t 911-configured – are supposed to be provided by the pay phone owner. Opticom then programs them into their directory assistance system. “You shouldn’t have those problems,” Wilson said, and promised to invesitgate the vagaries of this particular phone. I tried to reach New York Pay Phones again on Tuesday, but nobody answered the phone.

In any event, I called the number I was given. Thanks to a federal-level decision overriding New York’s Public Service Commission, local calls no longer are restricted to costing 25 cents for the first three minutes. At this phone booth, however, you’re invited to call anywhere in the country at the rate of 25 cents for three minutes. With a 75-cent minimum.

“Sheriff’s office.” I heard the basketball game next door kick into even more profane gear. “Hi,” I said. “Do you cover Newcomb?”

“No.” Did he know who does? “Try Franklin County.” I would later learn that I was, in fact, smack dab in the middle of Essex County – but the directory assistance operator mistakenly had given me the number for the Hamilton County Sheriff.

Back to 411 for call number six. Again, I was told that the number wasn’t available without a specific city; again, I pushed the issue and got a number. But I was out of change, and had to bill the next call to a calling card. And discovered later that each credit card call cost in excess of $2.00! (But the AT&T rep I later spoke with put me on a new calling card rate plan that retroactively lowered those costs – it’s worth checking to see what you pay for these things.)

I already knew the drill for call number eight, to directory assistance, but I hoped a request for a State Police number might be easier. It wasn’t, and the best the operator could provide was for Amsterdam.

So I called the Malone State Police. “Newcomb? That’s dispatched out of Ray Brook.” Do you have the number? “No – but I can patch you right through.” Click. Clunk. Dial tone.

My penultimate call, to 411, was to beg for the number of the State Police in Ray Brook. “Here it is,” the operator said, and gave me the Malone number I already knew. “Ray Brook,” I pleaded. “I want Ray Brook.”

Pay dirt: I got the right number, and, half an hour after I’d started, made my final call. Just as I heard that noisy car roar to life and the basketballers speed away.

Troubled by my 911 experience, I spoke with Don Jaquish, Essex County’s E-911 coordinator. “We’ve done the addressing for the service here,” he said, “but now there’s a controversy over who’s doing the dispatching. The State Police want it in Ray Brook, and they’ve been lobbying Pataki. That’s why the governor just vetoed a bill passed by the house and senate that would have given it to the local counties. There’s a lot of money at stake here, especially with wireless phones such a large part of the picture.”

But I couldn’t get cell service from my campsite, I said.

“That’s right,” he laughed. “You know that little state park on 28N? Go to the monument in front of the park and stand to its right. That’s the only place in Newcomb where your cell phone will work.”