Aboard the Steamer Natchez

Across the U.S.A. Dept.: In the autumn of 1989, my wife and I crisscrossed the country in a VW camper. Imagining myself a latter-day Ernie Pyle, I filed a couple of dozen pieces that appeared in the Schenectady Daily Gazette. Here's an account of our stop in New Orleans. 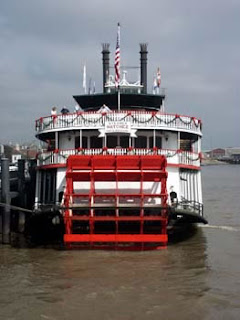 As this boat prepares to depart on a Mississippi River tour, a row of topside pipes erupts in a calliope serenade. The music, a medley of standards on the order of “Alabama Jubilee” and “Get Out and Get under the Moon,” bounces off the face of the nearby Jackson Brewery, and there’s enough of a distance to give the sound a weird delay. Cute and cacophonous at the same time, and that’s what New Orleans is all about.

“It's surprising how much variety you’ll find in Louisiana,” explained Dudley Passman, who does promotional work for Paul Prudhomme, the area’s best-known chef. “I grew up in Baton Rouge, went to school in Lafayette and now I live here. Baton Rouge is very conservative, bible-belt country. In Lafayette you find a more family-oriented community. Lot of Cajuns there, and lots of Catholics. New Orleans is like New York in being much more cosmopolitan. You’ll find everything here.”

From here, on the highest deck of the steamer, the colorful old buildings of the French Quarter seem dwarfed by the newer high-rises. Behind a row of four-story Federal-style brick houses are the twin towers of Sheraton and Marriott.

We booked onto the cruise because there's no hope of walking around after the meal we just ate. K-Paul's Louisiana Kitchen is on Chartres Street, smack in the heart of the French Quarter, where we had joined Dudley for lunch. We ate in the chaos of the upstairs room where the line of dogged would-be diners can stretch back half a block to Conti Street.

“Paul has just started a restaurant in New York,” he told us as we waited for seats, explaining why we won’t meet the chef. “It’s at Broadway and Houston Streets. It’s been open since August. He thought he’d better do it since Cajun food has been so misrepresented in that area.”

The dining area opened onto the kitchen; servers dashed back and forth with plate after heaping plate. Part of the fuss is customer recognition: you’re awarded stars at K-Paul’s, small adhesive awards that signify your eating abilities. “You get a gold star for finishing your meal. If you don’t finish your vegetables you get a green star. If you get a red star, watch out. That means you were especially difficult to deal with. Not many customers know about that, and when they get the red star, the waitress treats ‘em extra nice. But all the staff knows.”

The calliope finishes its medley. The boat departs as a lone trumpeter standing on the shore plays a few bars of “Down by the Riverside.” The boat’s PA-system welcome clears up some points of confusion: we won’t see the Gulf of Mexico because the Gulf is 110 river miles to the south (45 crow-flies miles), and we will be heading north, which is downriver despite the obvious flow in the other direction. Thanks to the speed and depth of the Mississippi (it’s around 200 feet deep here), centrifugal force whips part of the current into reverse. In the center of the river we can see the southerly flow. We settle in. So does our lunch.

What is Cajun cooking? A spectacularly tasty way of preparing the most ho-hum ingredients. Bottom-feeders like shrimp and crawfish, the mundane meats of chicken and pig. But it’s all local and it’s all fresh, especially at K-Paul’s, where freshness is an obsession.

Okra, corn, red beans, pecans—the diversity of native ingredients makes for very creative combinations. You can’t eat Cajun without sampling gumbo, and the appetizer Susan ordered had the darkest, nuttiest, smokiest base I’ve ever tasted or seen. “They cook the roux until it’s almost black,” Dudley explained. A roux is simply a combination of butter and flour—in this case, oil is used—cooked to remove the floury flavor and used to thicken soups and sauces.

A special touch also was given to the mayonnaise that accompanied my fried crab fingers appetizer. It had a tang of garlic wrapped in an easygoing complement of spices, with none of the cloying sweetness of commercial mayo.

It’s all homemade, all turned out in one of the three kitchens in the building. “Paul is usually down here every morning at nine, tasting sauces, sometimes making something like the jambalaya base. He stopped doing that for a while and he got real unhappy. It’s good for him to be doing this.”

Prudhomme’s business is a far-flung enterprise that includes cookbooks, videotapes, a sausage factory, meat processing, and a world-wide mail-order service. He is the inventer of the blackening technique that stormed the northeast a few years ago; as a result he is also one of the most ardent defenders of the cookery he’s made so popular.

And no wonder. Even so simple a dish as red beans and rice, Susan’s main course order, had a freshness you don’t expect from what looks for all the world like leftovers. It’s on the menu in observance of Monday. “That was always the traditional wash day in New Orleans,” said Dudley. “The housewife could put on the pot of beans and let it simmer all day.”

My jambalaya had all the heat that the overcast day lacked. It crept into the mouth and then exploded, a satisfying eruption of flavor. I know that the seasoning is an art, but I suspect that much of the success is due to the sausage. It’s like no other meatstuff I’ve ever tasted, and I can’t tell you why it’s so good.

Of course, New Orleans makes a specialty out of tempting you with its comestibles, and even the steamer Natchez had a full galley going full blast. I was tempted, but where food was concerned I could do no more than look. I could listen: the Riverboat Ramblers were providing Dixieland music. And I could buy t-shirts at the inevitable gift shop. But I headed for the first deck to check out the engine room, where the two big reciprocating steam engines work. Thirty-inch bore cylinders accommodate pistons that with a seven-foot stroke, all to turn the massive, 25-ton paddlewheel that propels us. The Natchez is one of only five true steam-propelled sternwheelers in the country.

New Orleans is the second-largest shipping port in the world, coming in just behind Rotterdam and ahead of New York for tonnage moved through. We see evidence of this in the number of cargo ships that wait to journey up or down the river. Along the way are the historic buildings, the field where the Battle of New Orleans was needlessly fought, the levees built up by plantation owners—there is even a plantation or two. It isn’t hard to summon a picture of river life a century ago when the paddlewheel was king . . .

The image sparkles away as we near the docksite. The tall buildings loom. Time to resume our tour of the French Quarter. And think about dinner. Dudley gave us several suggestions, and we were starting to feel like we might actually be able to eat again today.

It was the pecan spice cake that did us in, you see. One slice that the three of us couldn’t even finish, with its fresh butter cream and spongy texture carrying the piquant sweetness of the nutmeat. Three layers, served on a scoop of chantilly cream.

Dudley got a gold star for easing through his bowl of gumbo; Susan rated only a blue because she couldn’t make it through the pile of beans. Me? I got two gold stars.