Offered in anticipation of the weekend's excitement, this excerpt from The Magnificent Ambersons. 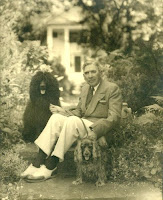 . . . these people were gayest on New Year's Day; they made it a true festival — something no longer known. The women gathered to "assist" the hostesses who kept "Open House"; and the carefree men, dandified and perfumed, went about in sleighs, or in carriages and ponderous "hacks," going from Open House to Open House, leaving fantastic cards in fancy baskets as they entered each doorway, and emerging a little later, more carefree than ever, if the punch had been to their liking. It always was, and, as the afternoon wore on, pedestrians saw great gesturing and waving of skin-tight lemon gloves, while ruinous fragments of song were dropped behind as the carriages rolled up and down the streets.  (1918)
Posted by B. A. Nilsson at 9:55 AM

Usually dislike any form of commenting, but whenever you read an excellent post sometimes you just need to get out of those lazy methods. This is such a post!