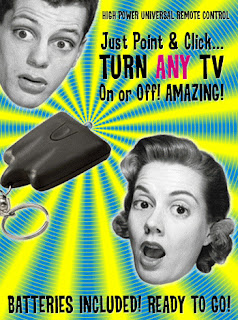 When I was five, you couldn’t pry me away from Bugs Bunny cartoons. By third grade, I shared with a few engeekened friends a passion for the TV show “My Favorite Martian,” and every clement recess period was spent extemporizing our own scenarios of space travel and the magic of on-demand invisibility.

By the time I was 9, TV owned my Friday nights. Start on channel 4 for “Camp Runamuck” and “Hank,” pop over to ABC for “The Addams Family,” suffer the idiocy of “Gomer Pyle” so as to avoid “Honey West,” follow that with “The Smothers Brothers” (the unremembered series in which Tommy was an angel) and finish back on NBC with “The Man from U.N.C.L.E.” My indulgent mother could wash my hair so quickly that it lasted no longer than a commercial break.

Which is to say that television owned me from a very early age, a constant and reliable companion in a combative, unpredictable world. As I slipped into my teens, I sought movies, which started with a 4:30 showing on channel 7 and reached its peak with the odd festivals – Alec Guinness, Busby Berkeley, the Marx Brothers – that channels 5 and 9 would show at night. So depressed was I during my single year in college that I rose at dinnertime, took a self-pitying skulk after the meal, then slouched until dawn in a room with a TV set, flipping from film to film.

In 1975, I started what would be a succession of restaurant jobs, all of them with the crazy hours that business demands. I didn’t own and didn’t watch anything on television again until five years later, when I moved to Schenectady to begin a completely different job that gave me back my evenings. A friend gave me a TV set, an act that I now liken to the inhabitants of Jack Finney’s Santa Mira giving seed pods to the unsuspecting.

My first – and only – attempt to watch something was a look at “WKRP in Cincinnati,” recommended because I was working in radio. It wasn’t so much the show itself that annoyed me, although the jokes had a setup/payoff rhythm I found dully predictable. It was the commercials that blasted in at a higher volume, preaching their inevitable gospel of consumer insufficiency. Bad enough that I was working for a fussy, anti-creative bureaucracy; I was in no mood to tolerate being yelled at by an electronic box. I turned off the set and gave it away and have watched almost no TV shows since.

Were I generally less misanthropic, this would be a social problem. Many conversations revolve around the shared experience of taking in this or that TV show, and when I finally confess that I don’t watch the thing, it can be as if I’d just exploded a snob bomb in the room.

Some people parry a snob response. “I really only watch PBS,” they’ll murmur, and if I’m sensible I’ll nod and change the subject. But I’m not, and therefore tend to reply, “PBS is like all the others,” followed by my analysis of what makes it all so crappy, which is usually enough to clear the room. The less-rarefied snob response is to say, “I only watch the news,” which provokes me into a denunciation of that branch of programming. Better for me to keep my distance from such conversations until I learn to keep my mouth shut.

My worst experience in that realm was on the set of the TV show “Law and Order,” where I was brought in a couple of times as an extra or to do stand-in work. The sole topic among my fellow extras (kept carefully segregated from the recognizable actors) was television, lauding the current season even while bitching about not getting hired for this and that.

The advent of TiVo and other time-shifting devices has freed folks from wasting pre-scheduled hours in front of the box, but it’s still a medium that long ago surrendered its potential for cultural advancement to the pull of market forces. After my time away, I discovered not only that the commercials are louder but that commercial breaks had grown longer (thus shortening the programming segments), while jokes had grown cruder and poorer and camera operators all seemed to be suffering from palsy.

Shostakovich is purported to have commented that Toscanini poured a sauce over everything he conducted, thus making it all sound the same. This is how I have grown to see TV fare. Whether it presents itself as news, documentary, or entertainment, I see an appalling sameness to its construction and technical events.

Better writers than I have explored its deficiencies, in books like Jerry Mander’s “Four Arguments for the Elimination of Television,” Bill McKibben’s “The Age of Missing Information,” and “Amusing Ourselves to Death” by Neil Postman.

Not that I don’t have a TV set. There’s a large flat-screen model in a room upstairs, where the family watches movies together. That’s my idea of the technology’s best use – making a family event out of an experience that has grown costly and annoying in theaters.

But I object to having it forced on me in public places. People no longer engage with one another when there’s a TV blaring nearby. Waiting rooms become torture chambers. Thankfully, inventor Mitch Altman came up with TV-B-Gone, a wonderful set-silencing gadget I keep in my pocket when I’m out in public.

And here’s the kicker. Most of the time, when I surreptitiously turn off a public-area TV set, nobody really notices. That’s how important it is.