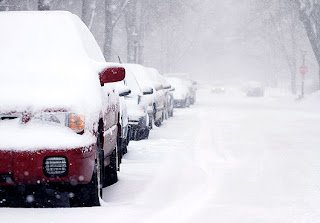 My father opined that all drivers must endure three types of travel disaster: losing control of your car, hitting another car, and being hit by someone else. I’m a veteran of all three, all of which, I can state with relief, were relatively minor if you don’t count a dislocated hip.

Yesterday I was driving a stretch of the New York Thruway with my teenaged daughter in the seat beside me. The light, unidentifiable precipitation that started falling as we eased away from the house turned into a determined snowfall by the time I’d paid the entry toll, and the road quickly whitened from bad to worse. Out of habit, I checked the braking. Once upon a time, a small, controllable skid would tell me how worried I ought to be. Now, with computer-assisted braking the norm, there’s an undecipherable shuddering that runs from the pedal up through my calf. I’m still not used to it.

We saw the aftermath of one spinout and managed to stay away from the insane SUVs that see bad weather as a call to idiocy, and made it to our destination and back home again safely. Which put me in mind of some of my winter-inspired greatest hits – all of which, thankfully, ended up as near-misses at worst.

I live on the side of a hill that slopes slowly up from the four-miles-distant Mohawk River, giving us what seems to be our own micro-climate. It can be thick with fog here and crystal clear on the river-adjacent Thruway; likewise, the quality of snowfall can change. As I discover on many a winter day beginning the long climb to home.

Farmer’s fields flank long stretches of the street, acting as wind chutes. We get spectacular whiteouts, so blinding that traffic simply stops for a while.

Back in my college years, I drove an orange Karmann-Ghia, that oddly bodied VW sibling, that had the added enhancement of a trio of .45-caliber bullet holes in the front passenger door. I had no money, and therefore neglected the car’s upkeep. Which is why I had bald tires on Route 684 in Westchester County on a day soon before Christmas, surrounded by a surge of rush-hour traffic, dense snowfall packing the street.

A succession of red brake lights flashed on in front of me. I pressed the brake pedal and felt the wheels spin. The ass end of my car swayed left, then right, then left again, the arc growing wider as I struggled to regain control.

Some damn Gilbert and Sullivan froth played on the cassette deck. The drivers I could see in their cars around me seemed not to notice my fishtailing. It felt nightmarish, unreal. We were on an overpass, which may have added extra iciness, and my car slammed into the guardrail on the right and stopped.

It was miraculous. No other car was damaged. They continued to ignore me as I tried to ease back into traffic. The car wouldn’t move. I got out and inspected the thing. The right rear fender had been shoved far enough against the tire to act as a brake. With freezing fingers, I uncurled the thing and limped home.

The most helpless-feeling of loss-of-control situations is when you’re in the passenger seat, as was the case not long after the fishtail, driving with – or, more properly, being driven by – a friend through Yonkers, where we entered the Sprain Brook Parkway by way of an especially tight curve. The road straightened; the car did not, executing an elegant 180 and stopping faced completely the wrong way. Another miracle: there was no other traffic. He righted the direction and on we went.

Black ice makes any such event far worse, and my first encounter with that evil phenomenon was on a winter day about 30 years ago, driving up the Thruway from Kingston to Schenectady. Just south of Albany, a mile shy of that city’s first exit, I saw an astonishing sight in the rear-view mirror. The headlights behind me vanished. They didn’t just go out: they disappeared with an odd horizontal flash.

Simultaneously, I saw ahead that pulse of a series of brake lights – but they were slewing. This time I had the presence of mind not to hit the brakes, and drifted to a stop inches behind another car on the right shoulder. There was no traction whatsoever.

But there was still the chance of the car behind smashing into me, or the car behind that one pushing it into mine . . . none of which occurred. Two lanes of parking formed, one on each shoulder of the two northbound lanes. To our left, the same thing took shape on the southbound side.

A Trailways bus shuddered nearby on the left shoulder. The door swung open, the driver stepped down – and ended up on his butt. I opened my door and tested the roadway with my boot. It was the slickest, smoothest surface I’d ever felt.

We sat for a couple of hours. Stopped-traffic jams usually turn into a social event, but this one imprisoned us. I later learned that the roadway was too slick for the salt trucks to enter. The one that saved us did so by laboriously salting the stretch in reverse.

Getting stuck in snow is less spectacular but can be just as frustrating. I’ve drifted into enough snowbanks to learn to carry a shovel in the trunk for the duration of the season. The worst indignity is being stuck in my own driveway, but it invites such trouble: it’s a couple hundred feet long with a 90-degree turn in the middle. On a hill. And even vigorous snowblower work or a snowplow run doesn’t eliminate the peril of that curve. I gave up and now park in the streetside garage of a neighbor who doesn’t drive.

New Year’s Eve has provoked a couple of memorable incidents. My wife was driving one such day as we headed to a party an hour or so away, taking us east along the NY Thruway to Massachusetts. On a long, flat, windy stretch she did something with one or another of the pedals that started the car fishtailing and her shrieking. “Steer off the road!” I shouted, which she did – and fortune granted a large, flat, obstacle-free field in which the car circled and spun and eased to a stop.  We caught our breaths and drove away from that one.


We didn’t drive away from a much earlier New Year’s Eve, probably around the time I was a high-school senior. I was crowded with some friends into a vintage Imperial owned by my friend Steve. We were headed for a party. There was a rumor of women. None of us had enjoyed much success in that department up to then.

Usually a conscientious driver, Steve misjudged a curve on one of the twisty back roads western Connecticut is known for, and the car got snowbanked. No amount of rocking, hand-digging, wheel-spinning, cursing, pushing, or pushing again was going to dislodge the thing. We were carrying champagne. We turned on the car radio, popped the corks, and saw in the new year right there.