Paws to Refresh Us 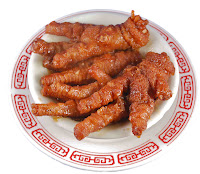 Travel up an escalator and into the large, bustling dining room of Jing Fong, a restaurant in Manhattan on Chinatown’s Elizabeth Street. Settle at one of the large eight-tops amidst the other families already seated there, families native to the area, conversing avidly, wielding chopsticks with virtuoso skill. Watch for the old woman bearing down on you with a large, lumbering cart. Choose the items you’d like to eat. Do it quickly – they get impatient. It’s busy. People are hungry. Forget about identifying what it is you’re choosing. They’re small portions, steamed or fried, their shells and wrappers betraying little about the contents. Trust the process.

Or have a Chinese dignitary at your side, as I did during my first visit to this venerable dim sum palace. This was many years ago when I was writing for monthly computer magazines, most of them editorially based in Manhattan. Having learned I’d never partaken of this Chinese custom, an editor of one of those magazines insisted that I join her and her husband, a former diplomat, for dim sum.

It was a Sunday morning. Canal Street was mobbed, and the turn onto Elizabeth ran us into the brunch line. She and I looked to be the only Occidentals there. Her husband glided us to the door of the restaurant and murmured a few words to the hostess. We immediately were ushered inside.

“Don’t worry about selecting things,” my host advised. “I’ll take care of it.”

He worked those carts like Brendel playing Beethoven, plucking harmonious combinations of items and placing them before us, each small plate typically offering enough for the three of us to share.

The food was delicious, all the more so because of the surprises each offered. “Dim sum” translates as “little things that please the heart,” and was devised as part of a traditional Chinese tea tasting ceremony. It’s now blossomed into big business, with the best variety of such restaurants (with the best variety of such offerings) in cities with something approaching a Chinatown.

All of this came to mind today when I read about the current chicken feet war. The U.S. and China are in a trade dispute over what works out to be a U.S. export of what in 2009 was 377,805 metric tons of poultry gams worth $278 million.

Virtually worthless to the U.S. market, the chicken paws, as they’re known in China, are a dim sum staple, and figure into other snacky manifestations as well. But now there’s a duty of over 100 percent imposed on what the U.S. is sending, prompted by protests from Chinese chicken over what they see as unfairly cheap competition.

If my experience is anything to go on, they’re an acquired taste. There came a moment at this meal when what was placed before me looked unusually anthropomorphic. Why anyone would fashion a spring roll to look like an animal foot baffled me, and I asked my friends, “What is this?”

To which they responded, “Just try it.”

Which, you’ll agree, is not a confidence-building response.

I tried it. “Suck the juices off it first,” I was told. “It’s very chewy.” Chewy, in fact, as hell. Cartilaginous. Tough. Easy to guess it was somebody’s foot, but the moment I was told it had belonged to a chicken, I had a mental picture of one of those birds strutting around in its own –

Anyway, it became less appetizing. Then I rationalized that almost any animal-based foodstuff, put under a mental microscope, would provoke similar scenes of grossness, and I’d made peace with them, hadn’t I? I tried another. Better.

Speaking of being under a microscope: I think it’s a rite of initiation at a place like that to see some round-eyes like me take the paw by the hand, so to speak. I know my friends were studying me for any reaction that would make a good subsequent story. I think the rest of the table also were so inclined. I can’t swear to it, but I think even the cart lady was in on this. I tried another. “It’s good,” I said, with only slight disingenuousness.

“Let’s get another plate!”

I can’t say my enjoyment of the things grew beyond take-it-or-leave-it, and have dined in the Albany area’s Asian eateries with complete confidence that I won’t unwittingly encounter them again. But it wasn’t too long ago when I was in Chinatown with my wife and teenaged daughter and happened upon the almost-forgotten Jing Fong. “We have to have dim sum,” I said, and we escalatored to the dining room.

Soon enough, after piling up plates of shrimp dumplings, spring rolls, pork shumai, vegetable ham sui gau, steamed buns, spare ribs, rice noodle rolls, and the like, I chose a plate of what’s termed “phoenix claws” when they’re sauced and fried. “What is this?” my daughter asked.

With far more alacrity than I, she tucked into it and said it was pretty good – not much to it, but she could get used to it. She now points out, however, that if this trade war keeps up and the U.S. is stuck with tons of chicken feet, it might well start appearing on more and more domestic menus – “So you’d better start getting used to it too, Dad!”

מִן הַסְּעָרָה out of the whirlwind said...

i am a fan of good writing. you have my attention! i may not always be able to do it, but i certainly do recognize it.