Vanishing Restaurants Dept.: Bugaboo Creek Steakhouse opened in Albany's Crossgates Mall in 1995 and stayed for twelve years, closing because of the very high rent. The rent is notoriously high, but the chain also was tasting trouble. They had at least 30 units at their peak; now, after bankruptcy and changes of ownership, they're down to twelve. I reviewed the place for Albany's Metroland Magazine in August, 1996, and found the animatronic animals startling, to say the least. A few years later, when my daughter was a toddler, I took her there to enjoy the show. There was none: every animal mechanism had broken. 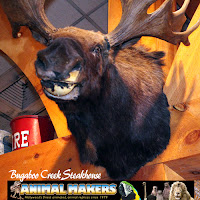 Chain restaurants depend on market research, focus groups and lots and lots of meetings to hone a particular style. The consistency this offers is a plus, although it’s achieved through safety and familiarity – in other words, no creative risks are taken. Which means that you’re going to enjoy a particular plateau of dining.
Those who don’t cook and don’t dine out much will think of the plateau as a summit. So be it. But Bugaboo Creek does go a step beyond the usual chain restaurant limit. Not in cuisine or service, which are exactly what you’d expect, but in what I consider to be its true identity. It’s a theme park. With a restaurant attached.
Start with the decor. In the manner of old-time Hollywood, where even cigar butts and driftwood looked scrubbed, Bugaboo Creek’s appointments are premeditatedly rustic, a base camp feel reinforced by the many stuffed critters on counters and walls. Oh, but that’s hardly all.
Assuming you’re seated and get your order in pretty quickly – and it’s efficient there, you won’t have to wait much – you’ll just be settling in over a beer or cocktail when one of those stuffed animals will come to life with a click and a whirr. Might be a raccoon peeking out of a tree stump. Might be a fish flapping its head and tail. And, at some point in the meal, a big buffalo head at one end of the room will kick into gear and sing “She’ll Be Comin’ Round the Mountain.”
You may want to order another drink.

I don’t even want to start to consider the implications of this new wrinkle of the taxidermic art. It’s a macabre cross between Disneyland and Saturday morning cartoons, although I prefer to think that anything stuffed and hanging on the wall is about as inanimate as it can get. Nevertheless, it’s a big hit.
And it ties in with the Bugaboo theme, drawn from a Provincial Park in British Columbia that’s a favorite with mountaineers and skiers. Bugaboo Spire, a challenging peak, prompted one 19th-century guide to use its name in a derogatory fashion that has since been used to describe any source of fear or uncertainty. Talking wall creatures rates in my book.
Lots of sleds, skis, fishing gear and the like on the walls, too, and the tables are also casual but sturdy, giving you lots of room. My horseback-riding wife was choosing a new saddle with her instructor, Barb, nearby that night, so we all landed at Bugaboo Creek for a late dinner.
There’s plenty to choose from in the bar food-steaks-poultry-pasta realm, and we started with an appetizer assortment of fried stuff (wings, mozzarella sticks, potato skins, chicken fingers and so on, served with four different sauces) that’s sneakily filling. In fact, Barb also put in an order for what’s called Whitewater Bugs, a preparation of grilled shrimp that’s pretty tasty. (And don’t you go using that name, Whitewater Bugs. It’s copyrighted.) Susan started with a bowl of onion soup that was surprisingly good, not at all salty and finished with good gruyere cheese.
You get a garden salad with an entrée, nothing special, or their version of Caesar salad, which Susan chose, also nothing special but still closer to the original than I’m used to seeing (and tasting). Warm honey wheat bread is also served with dinner.
Barb chose Cariboo Chicken TM for an entrée, which turns out to be grilled breasts and Canadian bacon with a topping of barbecue sauce and cheese. Again, nothing extraordinary, but that’s not what we’re expecting here. Likewise, my baby back ribs were nicely smoked, lacking the character of what’s made at our better local barbecue houses but certainly adequate, served with smoky baked beans. Jaime’s Mountain Meatloaf TM is a fairly tasty ground sirloin concoction, served in a ball, which (except for a few enlightened diners) may be the closest some of us can get to real meatloaf these days. Real mashed potatoes, too (all right: Smashed Potatoes TM).
Because we chose to box up most of our entrées, we felt all the freer to explore dessert options. Barb had mud pie, no surprises. Mine was Albert apple crisp which Susan editorially insisted I top with Chubby Hubby ice cream. It was all still too much to finish. Service was attentive – Chauncy, our waitress, took good care of us – and we decided that if chain restaurants are evil, this is definitely one of the lesser of ‘em.