From the Vault: Buddy Ottaviano spent over 40 years at the Schenectady Daily Gazette, 25 of them as city editor, his last five as managing editor. Back then the paper was legendarily grey, but it rewarded a close reading. Like Ottaviano, there was color hidden within. I freelanced for the paper for a few years in the late 1980s, and Buddy was generous not only in giving me assignments but also bumping up the miserable fee I received. I lived in Schenectady back then, and could walk to Gazette's State Street offices. One day in 1989, as the weather turned chilly, I stopped into his office and he asked, "When you think of winter, what comes to mind?" "That's easy," I said. "All the damn snowblowers starting up at the crack of dawn on my street." "Great," he said. "Give me 700 words on that." 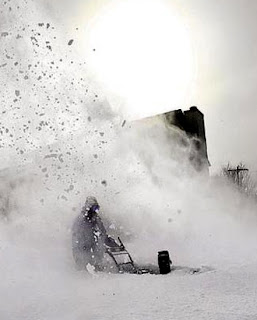 Only after I spent a winter with black and blue ankles did I understand why the world's largest snowblowers live on my street.

The first time it happened, not long after I moved onto the street, I was in bed. In a sleep that can resist the telephone and garbage man and probably a small dynamite blast next door. There was this roar like a thousand angry chainsaws, muffled at first, annoying me out of my sleep with its insistent crescendo of buzzing.

And it was a sound I didn't recognize.

Outside, the sky was indigo and the street-lamps still glowed. A fresh layer of snow carpeted the cars and street and housetops, but distant plumes of snow shot up as if weird snow-whales were swimming by.

This was the Ingersoll Avenue Snowblower Army.

It's a kind of infantry, with machinery instead of horses. It rises and assembles at the dawn's early light, an hour during which a writer collects pleasant dreams about massive paychecks. And the army marches through the snow, conquering driveways and creating massive, greyish berms at curbside.

Too frightened to sleep, I watched the men at work. They moved with the dogged determination of people who will not be conquered. Whether the snow fell from the sky, as it did the night before, or from the roof, which happened periodically throughout the day, they were there to clear it.

And I mean clear. The black finish of each driveway shone through as if it were August.

My anger turned into amusement. Giant snowblowers, indeed. Obviously it was just recreation for the retired. Nothing so dramatic was needed by a hearty fellow like me.

One starts to think large, orange snowblower thoughts as one shovels. Compromises are made: “I'll just shovel the tire area and let the car pack the rest of it down.”

It took me a few weeks to learn about and appreciate the Ingersoll Avenue Driveway Meniscus.

My street is made up of close-together houses separated by driveways or alleys. Often two driveways are adjacent, as is the case with mine and my neighbor's. We’re separated by a fence.
My garage is filled with stuff and is anyway inaccessible once the doors freeze shut, as they do every winter. So we park in the driveway.

After driving over the not-quite-clear path a few times, the snow banks itself against the house and the fence, melts a little, and freezes. Forcing me to park in what has become a long, slippery soupbowl. Just try getting out of a car with that underfoot. Your feet slide back against the car, and the metal obligingly chews another piece off your ankle or shin.

The next winter we got ourselves a snowblower. It was a little red thing, on sale at a department store, and it promised to move enough snow to build several igloos. After all, we only needed to clear an area six feet wide and 30 feet long.

When the snow dropped again, I forced myself out of bed as near to dawn as I could manage and started up my mighty monster. True, it only chirped even as the machines around me roared, and it didn't shoot the snow nearly as high. But I managed, moving again and again over the same strips of driveway, to clear all that snow. Finishing a few hours after all my neighbors were back inside.

We took the snowblower back, and the winter before last we simply had a neighbor run his plow over our driveway. The meniscus returned. I won't offer into print the kind of language I used after sustaining my fourth ecchymosis of the season. I did call upon the gods of snow to withhold their bounty the following year, and last winter they obliged (please don't tell the skiers I did that).

Last week I saw a big, orange, two-cycle snowblower on sale. I intend to join the infantry.