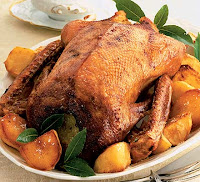 Toward the end of December 1972, Jean Shepherd devoted one of his radio programs to, as he termed it, “The Majestic Goose.” Best known as the author of the tales that formed the basis of the movie “A Christmas Story,” Shepherd held forth for many years on WOR in Manhattan every weeknight with a 45-minute show. He was a master monologist with an incisive view of American life; on this particular program, he lamented the fact the roasted goose plays so small a part in the otherwise large realm of the domestic palate.

As Shepherd pointed out, this is “the only time of year when you can get one of my absolutely favorite – well, it’s a sensual experience, is all I can say – one of my favorite items of food.” Before launching into an overview of the goose in history (from which I’ve drawn several elements of this piece), he termed it “one of the truly exquisite taste pleasures. If there’s any food I enjoy better than roast goose, I don’t know what it is.”

That opinion has been extensively shared throughout history. Goose has long been a Christmas meal staple, with some incursions (notably in my house) at Thanksgiving. Tracing it as a foodstuff back through history, we find it as a staple of a Celtic Hallowe’en (Samhain), which, for a mighty conflation of holidays, was also New Year’s Eve.

Goose is part of the traditional Hanukkah meal. It was the symbol of Amen, the Egyptian god who was the source of all creation – and you’ll find gooseheads on many other ancient deities. It’s a staple of Michaelmas, the winter solstice feast. The animal’s migratory patterns coincided with key agricultural moments, so the beast was seen as magical, even godlike. Thus, the ritual of dining on goose was performed as a gesture of gratitude for a good harvest.

A flock of sacred geese were kept in the Roman Capitol at a time (about 400 B.C.) when that city was under siege by the Gauls; when Gallic forces attempted a surprise pre-dawn rout of the Roman army, the birds were awakened by the clanking armor and raised enough of a clamor to alert the soldier Manlius to the incursion – and the Romans thus had time to drive back and eventually defeat their enemy.

This incident inspired General Sir Gerald Templar when he was appointed High Commissioner of the British forces during the “Malayan Emergency” of the 1950s. Templar was curious to see if geese could warn of the approach of terrorist forces, and commissioned an in-field study, the result of which was successful only insofar as it provided an exotic dinner once it was understood that the taciturn birds showed no interest in the approach of anyone.

With sufficient training, however, watch-geese have been successfully used by the German and American armies. As Shepherd pointed out, urban apartment-dwellers might be able to make use of them as well, as you’ll rarely find in your lease a proscription against geese.

So why are we in this country so turkey-centric in our ritual dining? Turkeys are creatures of the New World, and were introduced to Europe only later. Even then, it was an expensive bird. (That’s why Scrooge buys the Cratchits a turkey.) We’re just, as the saying goes, lousy with turkeys.

And keep in mind that turkeys are flops, while geese lay golden eggs. Of course, a goose egg is the most onerous form of nothing – but that’s a term that originated in baseball, a sport that colored the language like no other. Things are going well when the goose hangs high, but we’d rather never more encounter a battalion that’s goose-stepping.

You can goose someone with a jab to the butt, but don’t do it to a stranger in pursuit of intimacy: that would be a wild goose chase. (Geese are notoriously difficult to catch but are partial to liquor, so savvy farmers would tip some booze into the mash and thus render their quarry more compliant.)

When your goose is cooked, you’re done for, but if it’s your holiday dinner, you’re in for a treat. Move beyond the turkeys, cast aside the ducks, and grab one of those lone geese off to the side of the meat display. And here’s what you’ll do with it.

Geese are thick-skinned and fat-filled. They have an unfairly earned reputation as being greasy, which is only a reflection of improper cooking. It’s an excellent bird to stuff; the best way to do so is by removing the wishbone, stuffing the cavity, and trussing shut the opening.

Elevate the bird above the roasting pan so it won’t simmer in its own fat. Cook a ten-pound goose for half an hour at 425 degrees, then continue at 350 degrees for another 90 minutes to two hours. Let is rest for a while before carving – then enjoy the luscious dark meat you’ll find in all parts of the bird.

Stuffing options are legion. Apples and onions are always good; the Scandinavian recipe calls for apples and prunes. To get even fancier, marinate the bird overnight in a combination of citrus juice and wine.

And then you’ll want to take a gander at the sauce for the goose, which need be no more than what you make for your turkey but seasoned to suit the richer, deeper flavor of the meat. I try to work a good Burgundy in there, offset with a little fruit.

Restoring roasted goose to the holiday table is a welcome alternative to turkey and ham, and I’ve already assured my family that, yes, we can have it for Christmas, too.