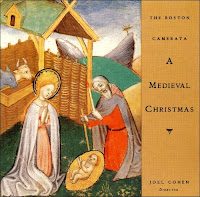 At 2:30 PM on a bright December day, the orb of sun blazes through a lower quadrant of the picture window at the back of Union College’s Memorial Chapel, blasting its light across several center pews.

I settled myself into the front one (leg room!) knowing that by the time the Boston Camerata concert begins, in half an hour, that orb will have slipped out of sight.

“A Medieval Christmas” offered selections from the 10th to the 15th centuries – 500 years of music in celebration of the holiday, sacred and secular. That’s a huge window of time, far larger than most classical-music concerts offer, and the variety of pieces and cultures of origin became itself a set of windows, from tenth-century Spain through 13th-century France and England and into Holland a century later and Germany a century later still.

Given the spare notation and shocking lack of original recordings, the ensemble offers a best guess as to the performance practice – but it’s an enlightened, very educated guess. When former music director Joel Cohen and the ensemble put together this program (it’s one of several Christmas programs they offer) in 1974, Cohen already was recognized as one of the leaders in early-music scholarship.

And the program has evolved over the years, even as faces in the ensemble have changed and longtime member Anne Azéma took over Cohen’s position. Soprano Azéma also has contributed her expertise as the program developed over the years, and maintains the most important aspect of its presentation: it works well in front of an audience.

Music is a real-time experience, best witnessed in person. As compelling as Boston Camerata’s recordings may sound – and “Medieval Christmas” is one of several that get frequent rotation in my house – the up-close timbre and excitement of voices and instruments can’t be speaker replicated. During the course of a couple of hours, we – the several hundred who filled the hall – journeyed with them as these little windows of disjointed time opened into one another and smoothly tied together so many different musical thoughts about this particular time of year and the stories that inform it.

Growing up with an anticipation of Christmas caused it to become an event whose season seemed to hurtle past in a frenzy of shopping even as the day loped nearer more slowly than any other. The time we spent with Boston Camerata froze that process for a couple of hours, even as that couple of hours gave us the lovely spectacle of the sky outside, its blue re-colored by the colored panes in the much-mullioned chapel window, deepening into a checkerboard of purples as dusk deepened it into darkness by the concert’s end.

Those couple of hours of concert have another characteristic, the one that keeps me returning year after year. For all of the musical richness that’s offered, there’s a stillness at the program’s heart. Comparative stillness, I should say. I doubt that the lives of the people who originally sang and enjoyed this music had any of the frenzy we take for granted as “life,” and their music reflects this legacy. It’s hard to find that measure of stillness these days unless you pursue it late at night; how nice to enjoy it during an afternoon in the company of some like-minded people and the deepening sky.