After Hours with John Fahey

From the Vault: Guitarist John Fahey performed at Saratoga's Caffe Lena on Nov. 23, 1986. I attended and reviewed that night's second set, a rambling, discursive medley-cum-improvisation that gave us the musical legacy of the man who started his career under the pseudonym "Blind Joe Death." Another spectacular guitarist, Paul Geremia, was in the audience, and Fahey invited my wife and me to join the two of them for drinks after the concert. We walked a block to a long-defunct bar. Here's the piece that accompanied my review in Metroland Magazine three days later. 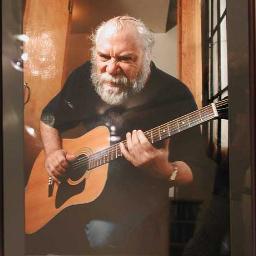 Nothing much stirring in Saratoga Springs on a Sunday night. The last show at Caffe Lena ended at 11 and John Fahey wants a drink. And he wants to catch up on some talk with a fellow guitarist.

Fahey’s first-ever appearance at Lena’s brought out two full houses of enthusiasts to watch this unique artist at work. Those who know him only from the old Takoma and Vanguard albums have a picture of a skinny kid with circumflex eyebrows but saw a balding, bearded, middle-aged fat man in a blue work shirt, as incongruous an image as you can imagine for this artist.

Of course, when he plays it’s a different story. Fahey has spent a lifetime absorbing the blues traditions of this century’s greatest players; this he has translated into a sound all his own.

Onstage he consumed a pitcher of Coke. Now he’s after something harder, so Fahey and Paul Geremia cross over to Caroline and into the Turf Bar.

Paul is younger, leaner, but with a tired expression. He’s been traveling, performing in parts of western New York. On his way back to Providence he stopped in to see John’s second set.

“I’m a snob,” says John. “I admit it. And I can’t stand most of the blues guitarists I listen to today. But Paul is different. He’s the real thing.”

So John has a few secrets he wants to share.

The Turf is quiet. Walter Campo is tending bar with an expressionless, William Frawley kind of face. He wears a brown knit shirt with the top button buttoned. A few drunk kids at one end of the bar are kicking up a bit of a rumpus, but these blues guitarists who just came in, theirs is a solemn scene. The kids take off.

One drunk remains, a weatherbeaten dipso with a beard as scrawny as his face. He bums a cigarette off Paul and sits to one side, talking to himself. Walt won’t serve him any more.

John is doing shots of brandy, neat, with a Coke chaser. Paul orders some good Scotch.

“Now, the thing about the great blues players, and I’m talking about guys like Charley Patton, is their use of the fourth. You listen to some early Patton and he wasn’t doing that, but listen to the late stuff–wow!”

“You ever play a tune of his called ‘Stone Pony?’” asks Paul.

“You ever figure out what the title means?”

John takes a drag on a Camel he bummed from Paul. “It’s some kind of superlative,” he says in his high-pitched voice, another incongruity in a man his size.

It’s raining outside. You can hear the drops hit the windows ever so lightly, like a drummer’s brush.

Walt’s been listening in. “You guys musicians?”

John gets bashful, won’t admit it. Paul senses a professional interest and discovers that Walt spent much of his professional life playing drums for the big bands, outfits like Glenn Miller’s and Glen Gray’s.

The guitarists are impressed, fire off questions: “Did you travel on the band bus?” “Did you know Bunny Berigan?” Walt nods yes to both, gets a little bashful himself, wipes the bar with a cloth.

John and Paul have each been in the recording studio recently and discuss the problems of royalties and distribution. Talking of big bands puts John in another mood. He recalls some sessions he did with a band recording covers of very old dance tunes.

“Actually, most of the guys came from Andy Williams’s backup group,” he says, crediting leader Jack Feierman with arrangements. “And then we’d get some ringers who happened to be hanging around. I mean old guys who’d played in the bands for years. Like, we got guitarist Allan Reuse, played with Benny Goodman, he’s on the Carnegie Hall record. So Allan Reuse pulls up in a big Cadillac, back when they made them big, and he’s got about five guitars in the back seat. Plus he played banjo, violin – he could play anything.”

“I’m thinking of replacing the fingerboard on my guitar,” says Paul. “You notice any difference between ebony and rosewood?”

John shrugs. “I don’t know. I just pick up the damn thing and play a few notes and if it sounds good I play it.”

They get back to the subject of Charley Patton tunes; finally John lumbers out to his rented car and brings back a beaten old case with a Valvoline decal on its belly. He pulls a guitar out of it and tunes.

“I’m going to show you something,” he tells Paul. “I want to show you this riff. Nobody else knows how to play it. They think they do, but they’re getting it wrong. Watch.”

He hits a chord. The dipso looks up, croaks out a word or two in an unrecognizable tune, goes back to contemplating the bar.

John starts to play. There is a change in his face and body when he’s making music. It was evident at Lena’s and you can see it now: The fat guy with the grey beard closes his eyes, tilts his head back a few degrees, and it’s like the music flows out through his fingers.