Math for My Homeschooled Child 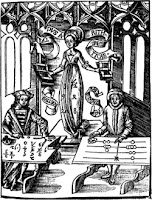 Problem 1: Sam has two parents, one step-parent, one brother, and two sisters. Alice has one parent, one grandparent, one ex-husband, and two sons. When Sam marries Alice, how many people will show up at the house for Thanksgiving?

Problem 2: Alice is pregnant again. Her obstetrician charges $3500. Her ultrasound was $392.97. The anesthesiologist gets $880. Her doula wants $400, but won’t sign on if an anesthesiologist is involved. The doula also brings a midwife to the team, who is prepared to barter her services if Sam straightens out her tax mess from last year. Forgetting about the facility fee, the mix-up at admissions, the vaccination fight, and, of course, the resultant legal fees, what was the cost of bringing you into this world?

Problem 3: Sam wants to live in the city. Alice reminds him that Uncle Carl cashed in by selling his city house and buying that old farm for half of what he netted. Sam reminds Alice that Carl’s attempted sleight of hand with the capital gains backfired spectacularly. Alice throws a tantrum, insists that’s not the point, she’s just sick of the city, sick of it, it’s no place to bring up a child. Sam and Alice buy a rotting carpenter’s gothic near Carl’s place. They discover that the school system is so horrible that it’s either private school or homeschooling, and because Sam works at home and can supervise the so-called lessons, they’ll save money by opting for the latter. If the local school district receives state and federal aid to the tune of $3,000 per student, and the district counts 395 kids in attendance (except during hunting season), how many bake sales is your education costing them?

Problem 4: Sam and Alice have $938.75 in the house account. Because Sam has overspent his business account, he takes $385 from the house account to attend a CPA conference in Chicago. While he’s away, Alice withdraws $500, ostensibly for house repairs, but Sam returns to find the old punky wood still on the deck. You mention that Uncle Carl stopped by frequently. How many $32 bottles of 12-year-old Chivas can Sam afford?

Problem 5: Carl’s wife, Sally, is pregnant with twins. Alice gets pregnant and, fortunately, miscarries. Now that Sally knows the truth about my brother, she’s contemplating an abortion, but she tells me she doesn’t believe she should take out her anger on zygotes that she knows are half hers, even if the other half contains DNA she now finds repulsive. If the average ejaculate from a 31-year-old beer-swilling idiot contains about 350 million spermatozoa, most with impaired motility, how many of your Mom’s shopping trips actually were spent in the company of Carl?

Problem 6: Sam and Alice have separated and plan to divorce. Sally and Carl are divorcing. Carl’s new girlfriend, Moira, just moved out of the house she shared with her husband. Although group therapy for six would be covered under Sam’s very expensive health insurance, he is disinclined to be stuck in a room with these people for any length of time. If you’re forced to testify at a custody hearing, would you rather be with an untrustworthy slattern and her alcoholic boyfriend, or an adventurous and newly liberated financier?
Posted by B. A. Nilsson at 11:29 PM