In these days of shuffle play, the cumulative effect of a program of carefully chosen music stops being an option. A concert experience, at least when there’s no arena involved, shuts you in a hall with like-minded others willing to forego the visual experience (put that crossword puzzle down!) and let the music do its magic. Over the course of a couple of hours, with intermission, there’s the possibility that concert will culminate with an excitement as great as any provoked by plot-driven entertainment. 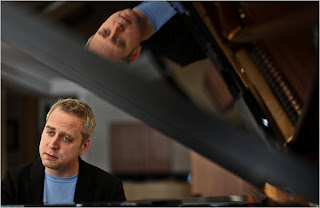 That’s where shrewd programming comes in. In my long-ago radio days of inflicting classical music upon the masses, I shared with other announcers a pleasure in building the music into blocks of an hour or more in which one piece led to the next with some sense of continuity or contrast, with the new piece somehow taking up the energy of the one before. Of course, I had a range of textures at hand: orchestral, chamber, solo instrumental and more (but no vocal. This was WMHT-FM in the early ’80s, when, thanks to the Napoleonic numbskull who ran the place, vocal recordings were forbidden).

Solo piano restricts the playing field, but there’s a boon in such a restriction. The music has to work with its core attributes of melody, harmony, rhythm, and dynamics. The form of a piece becomes more evident. The conversation between performer and audience may seem more austere, but we entered the hall expecting this.


Pianist Jeremy Denk returned to Union College in Schenectady for a recital on Dec. 2 that put the idea of variations in the spotlight. In previous appearances, he played sonatas by Beethoven and Ives, contextualizing the latter in such a way that even the fustiest of attendees (and there are some fusty ones!) had to at least appreciate, if not enjoy, the works, which well deserve Denk’s enthusiasm. (He also has recorded the works.)

On the recent program, György Ligeti was the scare-away name, but the comforting presence of Bach and Beethoven promised to ease any potential trauma. But the Bach and Beethoven that Denk chose to play were among those composers’ more challenging ruminations, from a couple of Bach Toccatas – Denk characterized them as “one-pot meals” – to Beethoven’s formidable final sonata.

Denk likes to talk, and what he offers is so concise and illuminating that you have to wonder why more performers don’t share their insights. Few, I suspect, are as articulate. Or witty. The Toccatas in D Major and F-Sharp Minor are, as Denk termed them, “the Jekyll and Hyde of the Toccatas.” Their shared use of a multi-part structure laced with fugues – and the distinctive writing style of Bach – give them plenty in common, but one has an errant cheerfulness while the other broods more often.

Within their structures are recurring motifs that Denk identified before launching into the works, noting that this gave them much in common with Beethoven’s “Eroica” Variations, which would follow. Denk has a deft hand at clarifying thorny music, especially when it’s as deceptively pleasing as the Bach works. His fugues maintained the necessary linearity to bring out their delights.

In this context, the “Eroica” Variations seem like a large toccata, those variations ranging so far afield in mood and style that they might be disparate pieces – but there’s a cumulative purpose that emerges. By the time the familiar theme recurs at the end (a theme he also used as a contradance and in “The Creatures of Prometheus”), it has even gotten the fugal treatment, tying all of the elements of the concert’s first half together and foreshadowing the end of the second.

Which was a good launching pad for a set of Ligeti’s etudes. Written in 1985, the six etudes of Book 1 are squirmy little critters, each concentrating on a particular idea, be it an interval, a theme, or a rhythmic device, and then throwing it to the far edge of tonality. Ligeti cited both Bill Evans and Conlon Nancarrow as influences on the etudes, which isn’t at all surprising: Nancarrow especially can be heard in the margins as the etudes flirt with spectacularly difficult rhythmic challenges.

The first etude puts one hand on the white keys, the other on the black, then drives a melodic figure they share father and father apart until the piece explodes. The third, rife with hand crossings, collapses into unison, which probably is the Ligeti version of entropy. The fifth, the most Evans-ish of the set, runs out of piano keys, while the final etude freaks out with a fugue whose elements change tempo – very Nancarrow-like. Substitute “riff” for “fugue” and you’ve also got a Glenn Miller arranging device.

Can the keyboard language go much farther than Ligeti has pushed it? That must have been the question asked of Beethoven’s Sonata No. 32, last of the lot, published in 1822. Everything about it is strange, from its two-movement form to the odd set of variations and fugue that finish the work, among them a variation that has all the elements of a ragtime piece. This is piece where the cumulative effect is extraordinarily powerful, and it was rendered all the more powerful in this performance because it came on the heels of all those other well-ordered works.

Kind of like the way Jess Stacy’s celebrated “Sing, Sing, Sing” piano solo from Benny Goodman’s 1938 Carnegie Hall concert sounds great in the context of just that piece – but takes on even more power when it arrives after an hour and a half of hard-swinging music.

Denk isn’t afraid of contrasts, and the sonata gave him plenty to work with. Contrast also means knowing when to pull back, and the reemergence of that movement’s arietta theme was one more piece of magic.

Shrewd programming also means knowing how to encore a successful performance, and Denk gave us what was most appropriate: silence. You don’t mess with something that good, and any further comment would have been annoyingly superfluous.
Posted by B. A. Nilsson at 10:56 PM