From the Cradle Dept.: Here’s the 100th item for this blog. To celebrate I’ve dipped about as far back as I can go in my published writings. Some similarly unassimilated high-school friends and I called ourselves the Pickwick Club. We grew up in a town very aware of its history, from the Revolutionary War through a time when notables like Eugene O’Neill and Walter Hampden lived there – and it’s still a refuge for well-off Manhattanites. The Ridgefield (Conn.) Press, a weekly that’s still going strong, gives generous attention to things historical, and agreed to publish a few pieces that my fellow Pickwicks and I wrote in which we tried to capture the spirit of such oh-so-serious musings.

To that end, we invented a Pickwick Club that was founded by misogynistic Ridgefieldians in 1895. We posed for photos to accompany the articles, as with the one below. And we had a great time putting our fictional counterparts into situations that would be amusing reading for those in the know. I have to credit Craig Borders with devising much of the Tweedy history below – he even went so far as to writing Socratic dialogues describing the philosophy we invented – and co-writing much of this article. But forgive us its awkwardness: we were not yet twenty.

The photo was posed in Ridgefield’s Richardson Park, not far from where Michael Chekhov had an acting school in the 1940s. Left to right: John Montanari (Jack O’Diamonds), Byron Nilsson (George Gordon), Craig Borders (Milo Wumbek), and Rod Fyfe (Moisha Fish). Not pictured: Ned Popkins (Neddie Seagoon). The article was bylined “David Lawrence,” who, we were told, was in the process of writing a full-length study of the club. 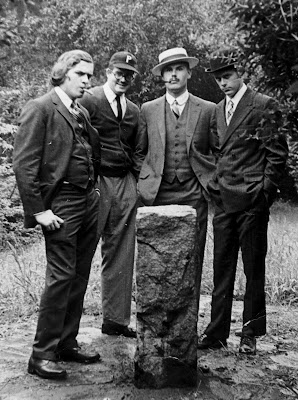 ONE OF THE MORE interesting and little known aspects of the turn-of-the-century Pickwick Club in Ridgefield was the unique philosophy they adopted as a result of the doctrine which came into the hands of Milo Wumbek in his capacity as a historical consultant to the New York Public Library.

To preface a discussion of “Futilitarianism,” as it came to be called, a short biography of J.J. Tweedy, the “Father of Futilitarianism,” should be related. Mr. Wumbek pursued research along those lines, and supplied me with the following details:

In 1795, J.J. Tweedy (there is no record as to his full first two names) was born to a shepherd and his wife in Scotland. Although common practice would have been for the boy to follow in his father's footsteps, he left to join the Royal Navy in 1810, where he served on board the H.M.S. Perseverance. Ship’s records indicate that during a skirmish with an American ship (in which the British were attempting to capture sailors), Tweedy got lost in the shuffle. As he later appeared in the United States, it is speculated that he was left on board the enemy ship.

Nothing more is known until he turned up in Vicksburg, Mississippi in 1863 as a barber. This was during the famous Civil War siege, and evidently afterwards he cut the hair of General Ulysses S. Grant, for there are letters on record to the White House in which (after Grant assumed the Presidency) Tweedy pleads to be appointed personal barber to the President.

Apparently the reply was delayed, for Tweedy did not begin the journey north to acknowledge his acceptance until 11 years later, in 1885, to discover that not only was Grant no longer President, he was dead.

A distraught Tweedy went to the New York home of his hero to pay homage, then moved into Brooklyn, where for the last four years of his life he wrote what was to become the definitive study of “Futilitarianism.”

A curious postscript to the story is the fact that his stacks of manuscript stayed hidden in boxes until 1902, three years after his death, when workmen discovered them prior to razing the house.

They were then turned over to the Public Library, which subsequently assigned Wumbek the study of them. It was he who assigned the name to these essays, and organized the writings into 23 volumes, including Tweedy’s projection of a perfect society in the tenth volume, known as “Futopia.”

The books were never published, and, in fact, the Library displayed a surprising close-mindedness when they declined to keep and classify the Tweedy Collection, which remain in Mr. Wumbek’s personal collection.

Before his death in 1967, Jack O’Diamonds, a co-founder of the Pickwick Club, gave one of the more succinct descriptions of the philosophy:

“You have to realize,” he said, “that these books were written by what I call the ‘seminal thinker of a sterile philosophy.’ Futilitarianism dictates that life is basically futile, and we exist in spite of that fact. It is more than Man against Nature – it is Man against Fate. The fact that our Club began as a rebellion against the treachery of women tied in  nicely with this –  it helped us understand that these women had no choice but to act in the way they did. It softened the blow.

“We’ve been accused of being pessimistic – cynical – but I don’t think that’s true. To tell the truth, we’re pretty damned optimistic. When you realize how Futilitarianism works, you see that we only take for granted life’s disasters. Therefore, the fact that you wake up in the morning is considered a major accomplishment. We don’t complain, for we expect adversity. We’re always being pleasantly surprised. I think Mr. Seagoon said it the best when he wrote: ‘We have organized the pitfalls of life and made a club out of them. If for nothing else, the Pickwick Club should be remembered for that.’”