The Heart of the Guitar

From the Vault: An ambitious classical-music website was launched in 2001, when andante.com offered essays, reviews, streaming music, and even its own boutique label. Even better, it commissioned several articles from me during its heyday and paid well and on time. But the work dried up two years later, after it was taken over by a French music entity, and in 2006, the site itself went dark. Here's a CD review I wrote ten years ago. The recording is still in print, so you have no excuse not to procure it. 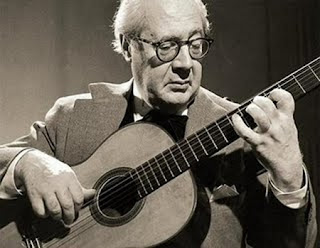 WHEN ANDRÉS SEGOVIA made his American recital debut in 1928, the audience at New York’s intimate Town Hall was filled with jazz and classical players alike. The former were the most immediately enthusiastic – and you can still hear that enthusiasm in recordings by jazz players like Eddie Lang and George Van Eps. Segovia’s classical legacy, in which the self-taught guitarist used his fingertips (and nails) to produce a unique array of tone colors, was passed to many, many younger players, John Williams and Oscar Ghiglia notable among them.

DG’s handsome four-CD collection gathers material recorded for Decca between 1952 and 1969, material that has had some previous CD issues but that never sounded this good. Most of it was produced by Israel Horowitz, who diligently worked with the temperamental maestro to create recordings that hold up excellently today.

Disc one comprises three concertos, two of which were written for Segovia. He premiered Ponce’s Concierto del Sur in 1941, and is saluted in the title of Rodrigo’s Fantasia para un gentilhombre, written in 1954. They were recorded in 1958 with Enrique Jorda conducting the Symphony of the Air (as the post-Toscanini NBC Symphony was known); three years later, the same forces got together to record Boccherini’s lively Cello Concerto No. 6 (transcribed by Gaspar Cassadó).

It’s the tone that grabs you first. Segovia has more than adequate technique, but this recording is more notable for his arresting sound, a sound that sparkles and swoops and dives, easy to spot in a blindfold test. There has been no end of Rodrigo recordings, many benefiting from improved recording technology, but none with such a unique character.

Segovia tirelessly promoted Spanish music, transcribing and commissioning where necessary. A disc of solo works includes the old, such as a set of six pavanas by Luis Milán, the classical (music by Dionisio Aguado and Fernando Sor), and late romantics like Albéniz and Granados. Some of this, like the Aguado, falls into guitar-fanatic territory – they’re works you like because you like the guitarist or you play them yourself. 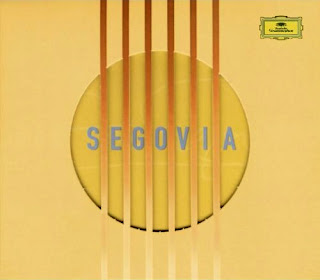 Although Segovia was in his 60s when these recordings were made, he still was playing with the fire of his (comparative) youth. There’s almost no interpretive difference between the included 1958 version of Granados’s Danza Triste with Segovia’s 1939 recording; the more recent one differs mostly in its fuller and slightly more reverberant sound.

His approach to the Renaissance pieces, such as the much-recorded selections by Gaspar Sanz, are as convincing as ever in the wake of so much historically-informed thinking; it could be argued that Segovia himself helped to create the performance styles that persist today, in which rubato has its place but without a lot of interpretive excess.

Working from an edition of Bach lute music, Segovia began a series of transcriptions that soon changed the nature of guitar recitals. His version of the Chaconne from the Violin Partita No. 2 (included in the set) is a marvel in which scarcely a note is changed from the original, yet which brings out the work’s many moods just as effectively.

Appropriately, one of this collection’s CDs is devoted to music by Bach, including the complete Cello Suite No. 3 and a variety of shorter pieces, a mix (though not noted as such) of stereo and mono recordings with the latter at the end of the disc and goosed with a little phony sound-spread.

Federico Torroba was the first to write for Segovia, beginning a long line of distinguished works by distinguished composers; the final CD sports Segovia-specific pieces with a Torroba bounty to start it off. This is the collection’s heart, where works by Ponce and Mompou and Castelnuovo-Tedesco shine in the hands of their champion. Much of it is now solid guitar repertory stuff; it’s a treat to hear them as the composers originally did.

The skinny jewel cases carry no program info, so you need to have booklet in hand for selective listening. Liner notes are informative and well written, and include a fascinating behind-the-scenes look at Segovia in the recording studio. This set is a necessity for any serious guitar-recordings collection.