“The discrepancy between the conductor’s and the soloist’s attitude toward the score was so vast and disturbing . . . that it seems hard to believe that Boulez would have willingly acquiesced in choosing Piatigorsky at all – except, of course, that he has a deservedly distinguished name, and that people who have admired him over the years would be happy to come and pay him homage.” 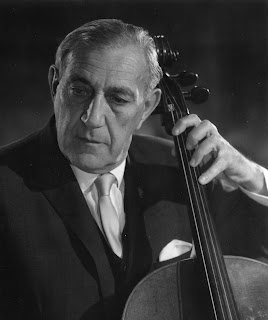 MY CLASSICAL-MUSIC SENSIBILITY developed at the tail end of an age of celebrity performers rooted in very romantic traditions. With the superstars like Heifetz and Toscanini leading the way, an array of interpreters for whom personality was the key had put individual stamps on their performances. You wouldn’t mistake violinist Kreisler for Elman, pianist Hoffman for Cortot.

And Toscanini’s great conducting rival, Stokowski, was as free-spirited in his conceptions as Toscanini was in clinging (so he claimed) to the score.

My first big-time classical concert visit took place on my thirteenth birthday, a trip to Carnegie Hall to see the 87-year-old Stokowski conduct the American Symphony Orchestra in a program that included Beethoven’s Seventh, Ravel’s “Bolero” (with what seemed like three times the amount of percussion usually called for), Ives’s “The Unanswered Question,” and the conductor’s own orchestration of Mussorgsky’s “Pictures at an Exhibition.”

“Wonderful Russian music!” Stokowski declared after calming the post-Pictures ovation. He played a couple of Russian encores and then, when the audience wouldn’t quit, asked the men to sing their lowest note. He got a somewhat bovine basso response, which he had the bass clarinet blat back. More applause; this time the women and their highest note, to which the piccolo answered. I had no idea live music could be so much fun, especially when steered by a weird octogenarian.

Perhaps this provoked my interest in historic recordings, then becoming more abundant as the companies found profit in lower-priced issues of back-catalogue stuff. The violin had been my instrument since fourth grade, and Heifetz was my do-no-wrong champion.

Although he was almost completely retired from concertizing at that point, he had a long legacy of recordings to collect, and through them I discovered his friend and colleague, cellist Gregor Piatigorsky. With pianist Arthur Rubinstein, they were the “Million-Dollar Trio” in the late 1940s. As a duo they recorded a kick-ass Brahms Double in 1960, and worked together throughout that decade to present and record the Heifetz-Piatigorsky Concerts. It was their version of the Schubert’s Quintet in C Major that won me over to chamber music, and I still find their recording of the Mendelssohn Octet the most satisfying in a field of many. 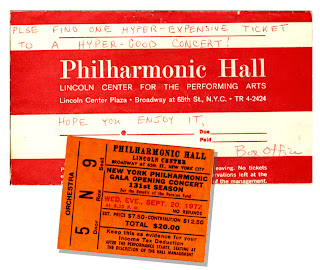 So when I discovered that Piatigorsky was easing out of semi-retirement to play the Dvořák Concerto with the New York Philharmonic in 1972, I did whatever I had to do to get there.

The first obstacle was raising the $20 for a ticket. Concerts usually cost about five bucks back then, and that was for a good seat. This ticket was priced at $7.50 with a mandatory $12.50 donation to the musicians’ pension fund. It was the season opener; it was the orchestra’s tenth anniversary at what still was known as Philharmonic Hall in Lincoln Center, so it was all kinds of fancy.

I called in every loan and favor I could muster and even did some parental handbag rummaging. But I couldn’t ask outright for the money, because I couldn’t tip my hand as to these truant plans. I would have to slip into Manhattan on a Wednesday night (Sept. 20, 1972, to be exact) and get back before I was too obviously missing, which meant a round-trip from Ridgefield, Connecticut by bus. Somehow I managed to scrape together enough to also cover the fare, the subway, and a snack.

I sent off the twenty with a note complaining about the hyper-expensive fee. The ticket came back with an annotation on its envelope: “PLSE FIND ONE HYPER-EXPENSIVE TICKET TO A HYPER-GOOD CONCERT! HOPE YOU ENJOY IT. Box Office.”

It was a warm, pleasant evening as I left the 66th Street station and Lincoln Center came into view. The plaza was a magical locus of everything I believed in, with a theater on one side and an opera house on another and halls for music and a library and school . . . and crowds of people who believed in the arts and gathered for enjoyment and enrichment.

Although I began to feel out of place as I approached my destination. The Philharmonic audience was decked out in tuxedos and evening gowns. I wore khakis and sneakers. Not to mention long sideburns and unruly hair.

My destination was the orchestra section, five seats off the aisle. A short, bald, penguin-suited man sat to my left. To my right, a dowager with the creepy, permanent smile that comes with much-lifted face. Even conductor Pierre Boulez, then 47, looked annoyingly establishmentarian in costume, but of course he was hired to be unflamboyant, the not-Bernstein, something he attempted there for a half-dozen years. 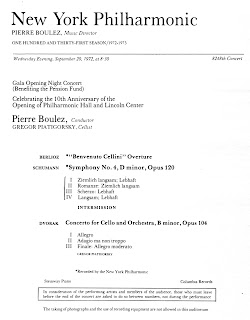 Berlioz’s “Benvenuto Cellini” overture kicked off the show and the guy beside me promptly fell asleep. His snores couldn’t really be heard, however, until the next piece, Schumann’s Fourth Symphony, began, and his wife, on the other side of him, played his sternum with her elbow just as surely as Roland Kohloff battered his timpani on stage in front of us.

Intermission dragged as I anticipated the actuality of seeing Piatigorsky, and when the cellist made his entrance it was a double surprise. First, because the guy was so tall – he was about six-four, and also because of the ovation he received – so many shared my enthusiasm!

“He represents a style of playing and a musical philosophy that look back to the 19th century,” wrote Harold C. Schonberg in the New York Times the following day, “and it is a style that hardly anybody today practices.”

Piatigorsky settled in as the orchestra began its mournful introduction, low woodwinds soon giving way to a big, lush, triangle-enhanced fortissimo. Then, when the soloist finally stabbed with his bow at the instrument, the whole complexion of the evening changed.

Boulez had given a measured, conventional reading of the opening, not very different from the Piatigorsky recording I knew well, one that featured the Boston Symphony under Munch. But this time, the cellist had a slower, freer interpretation in mind. It was as if we’d tumbled into a totally different piece.

“The cellist lingered over phrases,” wrote Schonberg, “used enormous fluctuations of tempo, and at times was all but tearily sentimental.” Let me tell you about that.

In the lively third (and final) movement, a march-like main theme dominates the proceedings, but towards the middle there sneaks in a lovely, Bohemian folk-like melody, perfect for the cello’s baritone voice. After crooning it for a while, the cello falls into a series of fast arpeggio passages while the flute plays an agitated answering motif. Then a short series of hunting calls sound as the cello grows more fervent – and suddenly the first violin takes over the Bohemian theme while the cello sings high and longingly. It can be a fantastically magical moment, and it was.

Not very often have I gotten spine-shivers at a concert. This was one of them. The guy next to me woke into full consciousness and became part of a totally rapt crowd. When it was over – and the piece has big finish – the crowd went nuts. Nice to see tuxedos and gowns throw off their native restraint.

In the October 9, 1972 New York Magazine, former NY Times critic Alan Rich took a swipe at Schonberg’s review, writing, “What could be generously described as a ‘romantic conception’ of the Dvořák seemed to me simply a matter of Mr. Piatigorsky’s not being able to manipulate the passage work at the proper speed.”

Schonberg: “In a way he made it ‘his’ concerto rather than Dvořák’s concerto. Slow tempos could be explained by Mr. Piatigorsky’s understandable reluctance to take chances.”

Rich: “Most of the critics were kind to Mr. Piatigorsky, in the special way we have of embroidering devious byways around basic truths.”

I’ve been reviewing classical concerts and recordings now for well over 25 years, and I can see Rich’s point (which is echoed in an anthemic Randy Newman song). But I try to keep in touch with the star-struck sixteen-year-old who found this concert, this performance by an aging master, so compelling that it was worth all the hell I caught for it later. I try to keep myself aligned with the more generous Schonberg point of view – which also makes enjoying the concerts themselves a more relaxing experience. And without catching hell in the morning.

GREAT account of a memorable night for you, Byron! Bravo! For me, my memorable evening was spent with Edward Kennedy Ellington in front of the stage at the Kentucky Bluegrass Fair in '67. What a night!

You beat me to Ellington by seven years, and when I saw him I was unfamiliar with the band. But the concert I saw is pretty much what's on the "Eastbourne Performance" album, so that (and the hundreds of other EKE CDs I've amassed) have helped me appreciate this country's greatest composer.