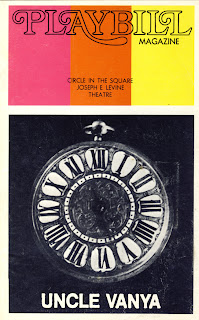 LET’S GET ONE THING out of the way. There are times in one’s life when one suffers such a buildup of nasal excrescence that one has no choice but to try to dislodge it. As discreetly as possible. A fingertip is the time-honored tool of choice. The fastidious among us tend to object. Should said dislodgement be conducted too publicly, behavior modification is recommended. I was subjected to a particularly horrifying version of that one day.

As a teenager, I developed what would become an ongoing love for film and stage, and availed myself of any opportunity to be in an audience. Living less than ninety minutes from Manhattan meant I could put in a day racing from movie to movie, from the Thalia on West 95th to 12th Street’s Cinema Village, stopping at the Guild 50th and maybe even a first-run at the Ziegfeld en route. (My one-day record was six.)

Access to plays also was easy, especially with a couple of friends making their way in the business who could sneak me in here and there. But the siren was Broadway, and I decided that it was more worth my educational while to skip high school on occasional Wednesdays in order to take a bus to the city and catch a matinée.

Just before the finish of my senior year came a star-studded revival of “Uncle Vanya.” Mike Nichols was at that point the most in-demand director on Broadway, having had a string of hits with “The Apple Tree,” “Barefoot in the Park,” “The Odd Couple,” “The Little Foxes,” “Plaza Suite” and more. And it didn’t hurt that he had films like “Who’s Afraid of Virginia Woolf?” and “The Graduate” behind him. 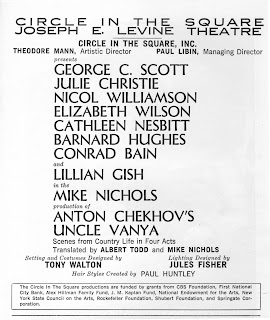 He helped prepare a new script and booked an eight-week run at the newly relocated Circle in the Square Theatre, which had moved from Bleecker Street to 50th. And he lured to it a jaw-droppingly famous ensemble: Julie Christie (Helena), Lillian Gish (Marina), Barnard Hughes (Serebryakov), Cathleen Nesbitt (Maria), George C. Scott (Astrov), Nicol Williamson (Vanya), and Elizabeth Wilson (Sonya).

Scott in “Dr. Strangelove” and Williamson in “Hamlet” were two outstanding performances I’d not long before discovered. Gish, of course, any film student knew – from Griffith to “The Love Boat,” with a great stop at “The Night of the Hunter” along the way. She was 80 when she did “Vanya.” She would live to 100.

But it was Christie who caused me to plunk down the price of a ticket. I think it was about twelve bucks, for the matinée on June 13, 1973. (Less than two weeks later, the TKTS booth would have its debut.)

A few years after its initial release, “Dr. Zhivago” settled in for a while at a local movie house. I went to see Alec Guinness and Ralph Richardson. I went back, and went back, and went back, to marvel at the beauty and poise of Julie Christie. Her appearances in “The Go-Between” and “McCabe & Mrs. Miller” only made my lovesickness worse.

My seat in the small, steeply-raked house was close enough to the stage for a heart-a-flutter view. Deeply absorbed as I was in the opening dialogue between Scott and Gish, when Christie entered on the arm of Barnard Hughes, I was a full-tilt, four-square goner, the collywobbles of infatuation vibrating my spine. There was nothing about her that was not as lovely as beauty can produce, given a rare glow of reality by the intelligence informing that loveliness. Combine the suffering of the men on stage and you wouldn’t touch my suffering. 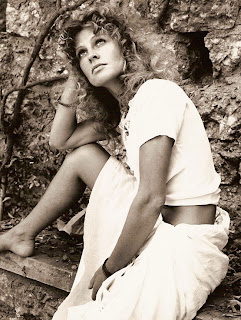 The lights dimmed between the first two acts, and soon Williamson was pitching Vanya’s woo to my sweetheart, with none of the gentlemanly reserve I would have pursued. Of course, Vanya had alcohol as an excuse. I was feeling more sober by the moment.

Then it was Scott with Elizabeth Wilson, herself no slouch in the comeliness department. They talked of food and drink . . . and I missed my Julie. And became aware of my surroundings, which included an uncomfortable nasal excrescence.

A quick glance to either side. All eyes were on the stage. I eased an index finger into the nostril in question and had just prized the occlusion from its perch . . .

. . . when George C. Scott whirled and shot an arm out and leveled his own threatening finger in my direction and bellowed, “Now, you CUT THAT OUT!”

My spine turned to jelly. My heart hit my uvula and racketed in my throat. Scarlet humiliation flushed from my forehead to feet.

And Scott added, still in a shout, “And take that goddamn thing away from him!”

My first thought was that it would make a very odd souvenir, but I already was realizing what really was going on. Some asshole a few rows behind me had snapped a couple of flash photographs, and a couple of ushers were in a tizzy back there, confiscating the man’s camera. (These were the good old days of theater discipline.) 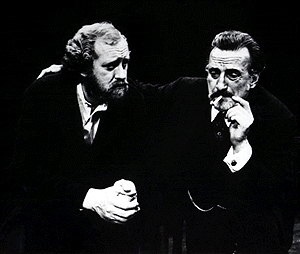 Scott and Wilson watched the proceedings, until he nodded and the audience started to applaud. He waved an arm and shouted, “No, no ... don’t. Don’t,” and signaled them into silence. The actors tried to resume, flubbed it, and took it back to Astrov’s entrance, after which it was smooth (if bittersweet) sailing to the end.

No, I didn’t try to haunt the stage door. I knew there’d be too much competition. Besides, a good “Uncle Vanya” – and this was one of the best – is devastating, and will set you to contemplating what you’ve been doing with your life and what you might still do in the few years left. I’d just turned seventeen, and this play showed me that it easily could be downhill from there. The following week I’d officially graduate from high school and be free to get on with my life. But that’s another story.