Kerry at the Bat

Apologies to Ernest L. Thayer Dept.: With the Nevada caucus results now in, the ever-more-depressing reality of the circus we'll suffer for the next several months is much too apparent. When we went through this eight years ago, it culminated in a surreal and unbelievable win. This was my analysis of it. 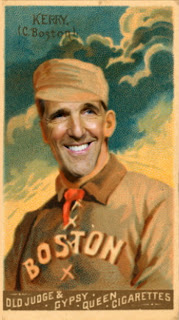 THE OUTLOOK WASN'T BRILLIANT
for the Democrats, they say;
They couldn’t seem to get a
heavy hitter into play.
And when Dean went nuts in Iowa,
and Gore stayed just the same,
We worried that the Dems would fold
its hand and quit the game.

A straggling few declared themselves
so fraught with deep despair
They’d even vote for Nader if he
showed up anywhere.
The rest of us thought four more
years of Bush was way too scary,
And watched with mounting interest
as the party went for Kerry.

Who’s Kerry? we all asked ourselves,
and answered back, Yes, who?
A Massachusetts senator, but what did Kerry do?
Details began to circulate, far back as Vietnam,
As Kerry hit the hustings with a kind of chilled aplomb.

At last! we thought, we’ve got our man, this guy can really win!
While deep inside, our patience started growing kind of thin.
The Elephant went after him with all its trademark skill,
And little Donkey Kerry drew a roadmap for the kill.

“Me too!” he cried when Baby Bush declared what he would do,
“You’re going to lower taxes?” sputtered Kerry, “Then me too!”
Gay marriage? “I’m against it!” said the Shrub, alight with flame.
Gay marriage? “He’s against it?” noted Kerry. “I’m the same!”

The Pachyderm was clever, strewing fear across the land,
Insisting that our Kerry was too weak to take a stand;
And as the Kerry caravan campaigned from state to state,
The pundits of Hate Radio were there to foment hate.

The 9/11 gang came out at last with their report,
And tossed a mighty ball of facts in Kerry’s campaign court.
Did Kerry ever even use a single potent quote?
Oh, no. You’d swear the Ass was busy reading “My Pet Goat.”

Meanwhile, in Ohio, Diebold took the upper hand,
As touch screens hit the precincts, Diebold told us what it planned:
“I’ve made a solemn promise,” said O’Dell, the C E O,
“And nothing in this process will be truly touch and go.”

As voter rolls in Florida were purged and purged again,
With longtime former felons as the new forgotten men,
As Rove began initiatives to sway each crucial state,
Our clean-up man, John Kerry, took his place upon the plate.

They pitched him a debate, and he swung hard and got a hit,
While Georgie smirked and simpered like a schoolboy in a snit;
They pitched the so-called Swift Boat Vets and Kerry stood his ground,
While mass-destructive weapons and Bin Laden went unfound.

We brightened when the Red Sox overturned the Curse of Ruth,
And hoped the timid Democrats would hit Bush with the truth;
But they were playing softball in the name of “playing fair,”
And if that fog should ever lift, no shred of truth is there.

Still, Kerry grew more focused in the following debate;
We really thought our man had smashed one clean across the plate!
But ever-fearful analysts pretended Bush did well –
Amazing how opinions can give off a wretched smell!

Election Day, while all the polls were running neck and neck,
And half the voters voted (while the rest sat watching “Shrek”),
The magic of Ohio gave the Moron four more years,
While people of intelligence sat weeping in their beers.

Oh, somewhere in the world a person’s vote can really count,
And after all the votes are in, we learn the true amount,
And then you’ll see a winner who has earned a place of pride –
Forget about America: Democracy just died!

Poignant as ever. We should never forget and vote damn it
Time to act. Susan