Wings Have a Prayer Dept.: During a 2001 tour with the musical "A Tale of Cinderella," which I performed with the NYS Theatre Institute, I took advantage of a stop in Buffalo to explore the city's eponymous chicken wings. 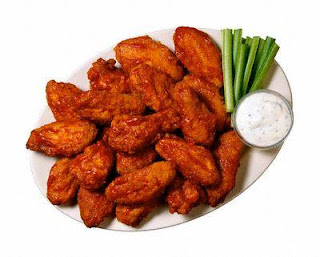 YOU MIGHT AS WELL ask for an authoritative origin of mashed potatoes or beef stew, but what makes the chicken wings story wonderfully amusing is that the origins go back only a few decades, as we obsessively chronicle our age.

In his 1983 book of food research, Third Helpings, Calvin Trillin sought to get to the bottom of the story, and even as thorough a reporter as he couldn’t pinpoint the truth. Still, we can credit Buffalo, NY, as the original location, and the story told at the Anchor Bar has been re-told so often that it might as well be true.

A neighborhood Italian restaurant since 1935, it asserts that the dish was invented in on a Friday night in 1964, back when Catholics routinely avoided meat on that day of the week. Dom Belissimo, who ran the place with his parents, Frank and Teressa, asked his mother to prepare something special for a group of his friends who dropped in shortly before midnight. She grabbed some chicken wings that had been destined for the stock pot, chopped off the tips, separated the two halves that remained, fried them and dipped them in a spicy sauce. To complement the plate, she grabbed some celery sticks from an antipasto platter and added a serving of blue cheese dressing.

Nobody can recall or explain the significance of the blue cheese dressing, which seems to work equally with celery or chicken, but I’m thinking back to a time when such dressing, usually incorrectly written as “bleu cheese,” was such an exotic commodity that restaurants charged extra for it. It probably was intended to add a touch of class to the plate.

Several years passed before the chicken wing took off, but when it did it did so spectacularly. And Buffalo is proud to be acknowledged as the source.

I spent last week in that city, and so visited some of the top chicken wing emporia to see what the fuss is about. I think I can state with some authority that wings are wings wherever you go, although some of those you consume out here may still be originating in Buffalo, as you’ll note later.

Part of the charm of the dish is its simplicity. Start with the wings, which come in varying degrees of plumpness. You can fry them or bake them; you can even bread them if you like. The sauce is a simple mixture of butter and hot sauce (Frank’s is the recommended brand), the degree of heat determined by the proportion of the liquids. You can add honey, vinegar, herbs and seasonings if you like.

The Anchor Bar (1047 Main St.) wins hands down for its hot wings, the style they call “suicidal.” While just shy of mouth-searing intensity, it inflamed the palate nicely. The wings in general were very good, and we walked away with some of the bottled sauce the Anchor Bar sells so that we could try it at home.

“We’re in the middle of remodeling,” general manager Ivano Toscani told me, “so it’s a little crazy back here.” But he showed me the kitchen, including a newly built room intended just for wings processing. This is needed because they’re shipping wings all over the world. “Just today, we got orders from California, Tennessee, Virginia. And we have steady customers in Japan, England, and, for some reason, Finland.”

Mention the Anchor Bar at Hemingway’s (492 Pearl St.) and you can feel the competitive blood rise. “Our wings are better,” insisted our server, Lynne, as she placed an order of hot wings in front of me as I dined with friends on the restaurant’s pleasant patio. “We get plumper wings, for starters.” It was true: these were some hefty chickens at one time. And the Hemingway’s preparation tended to be drier on the outside, which I prefer, without being less flavorful. Although they couldn’t match the Anchor Bar’s degree of heat. You can find these excellent wings in the city also at Buffalo House and Birchfields, which are under the same ownership.

Head toward the college – that would be SUNY at Buffalo – and you hear nothing but talk of Duff’s (3651 Sheridan Dr.). A pizza joint for over half a century, it added wings in the late ‘60s and has been grinding them out in quantity ever since. Again, not much variation from the basic recipe, although I noted that the hot wings were nothing more than the mild wings rolled in hot sauce (the mild wings themselves are sauceless). And the celery sticks are chunks of the stalk.

We stopped at La Nova (371 W. Ferry St.) on the way out of town and found ourselves in the midst of a factory with mirrored walls, a fast food joint-like seating area and a cluster of always-ringing phones.

La Nova, it turns out, does a $5 million annual business in pizza, and $20M a year in wings. They have their own wings-processing plant elsewhere, which provides the delicacy to Little Caesar’s and Sysco, among many others. They have a wings plant in Dublin that services Europe. They’ll overnight-deliver wings or pizza to you. They’re serious about this.

Here was an excellent middle ground. Not too dry or sauce-laden, not too spicy or bland, these wings are plump, tasty and addictive. The barbecued wings are tangy and sweet, and you’ll even find them here with teriyaki sauce. And the pizza is superb, too.

While we can find a similar variety of wings preparation in the Albany area, what’s missing is the fervency. Buffalo, which once called itself the “city of no illusions,” believes big-time in the morsels that bear its name, and they certainly continue to do right by the dish.