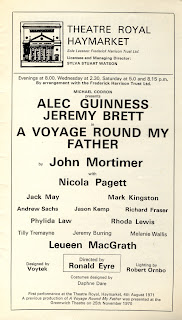 IN HIS SECOND VOLUME of reminiscences, My Name Escapes Me, Alec Guinness mentions his appearance in John Mortimer’s play “A Voyage Round My Father” in connection with a backstage visitor. I read this passage trembling with anticipation. Could it recount some alternate-universe phenomenon I desired but never actually enjoyed?

Not at all. The visitor was Sir Harold Acton.

My own trip backstage took place on Feb. 23, 1972. It was at the Haymarket Theatre in London, a gorgeous 18th-century structure that’s one of the oldest continually operating theaters in the city. But first some backstory for this tale.

I was on the brink of 16. Theater had become my overwhelming passion, it being a more participatory form of show-biz than the movies I loved. Especially seeing as how those movies were older titles I found on late-night TV.

New York’s channel 5 (WNEW) had introduced me to the Marx Brothers and W.C. Fields, Cagney and Bogart, and the best of Busby Berkeley, so I trusted its taste. Its weeknight 11:30 movie often ran to a five-night theme, and one week they promised a bunch of Alec Guinness titles, an actor with whom I was unfamiliar.

Monday night it was “The Lavender Hill Mob,” in which meek Guinness and burly Stanley Holloway pull off an improbable gold heist. Tuesday was “The Man in the White Suit.” “The Horse’s Mouth” was next, which was as unique a character study as I’d ever seen – and incorporated music by Prokofiev! Thursday they threw me a curve ball with “Last Holiday,” a J.B. Priestly script that takes a devastating swipe at England’s class snobbery even as it leaves you – or left me, anyway – in tears. The week wrapped up with “The Ladykillers,” one of the darkest, funniest films ever made. I’d never seen anything like it. I was nonplussed. I was hooked. 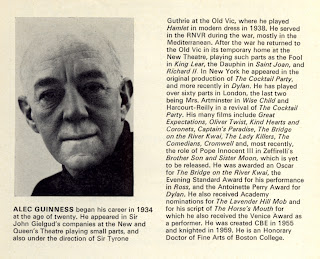 When my high school Theater Arts class teacher announced a theater tour of London, I was there. I don’t recall how I persuaded my parents to pony up for the trip, but I got my ticket and a little spending money and joined a dozen or so schoolmates and our faculty escorts for this week abroad.

The first thing I learned upon arrival was that the shows chosen for us were not what I sought. We had a dull musical version of “The Canterbury Tales” on Monday, and an odd little thing at the Mermaid Theatre the following night that put together elements of Kipling and Brecht. (Not bad, actually, especially after intermission when a much-reduced house was treated to livelier fare.)

But upon checking the schedules, I discovered that Alec Guinness was appearing in a West End play, so I blew off the next night’s fare in favor of “A Voyage Round My Father.” It was the funniest thing I’d ever seen on stage, and Guinness could bring down the house with something as simple as wiggle of his knee.

I was there with a friend. As the cast took bows, we impulsively decided that we had to meet the actor, and we hurried into the street as the applause continued, figuring we might need the extra time. We hit the sidewalk and looked around wildly for the way backstage.

Unbelievable as it sounds, a fellow standing nearby asked us, “Looking for the stage door? Right. Go to that corner, turn left for a block, and you’ll see an alley on your left. It’s up there.”

Not only were his directions good, but the little alley, lamplighted and wisping with fog, looked as I imagined 18th-century London to look. Three vehicles had backed into the alley: a big black taxicab, a silver Jaguar, and another taxi. A long walkway led to a door.

I knew from old-movie experience that there’d be a doorman. “We just have to murmur something like, ’Lo, there, Fred,’ and keep walking,” I strategized. It worked.

Inside was a welter of commotion, not helped by my pounding heart. Although the ground floor was empty, we heard many voices sounding from up the narrow stairs. Up we went.

Nobody paid us any heed as we peeked into the succession of dressing rooms. People were greeting and congratulating one another, shaking hands and embracing and swapping kisses, and I felt embarrassingly out of place. Also, there was no sign of Sir Alec.

“He’s probably not up here,” I suggested. We hurried back down. At the foot of the stairs we faced a large wooden door with a small card affixed to its front, reading: Sir Alec Guinness. We stared at the thing. Behind that door was . . . Henry “Dutch” Holland; Sidney Stratton; Gulley Jimson; George Bird; Professor Marcus . . . and at that point I wasn’t even aware of Colonel Nicholson, Disraeli, Herbert Pocket, Fagin, Prince Faisal, or the eight members of the D’Ascoyne family he portrayed in “Kind Hearts and Coronets.”

“I’m not going to knock,” I said. My friend agreed. We shouldn’t bother him. We’ll wait. We’ll wait outside, out of everyone’s way.

We slunk back to the sidewalk, took positions near a lamppost, and waited. The building emptied. Co-star Jeremy Brett was whisked away by the first taxi. More people left on foot. Stately, beautiful Leueen McGrath – she was at one time married to George S. Kaufman, for heaven’s sake! – walked by and drove herself off in the Jag.

And then everything settled back into stillness. “We missed him,” I said. “Couldn’t have,” said my friend. We waited. 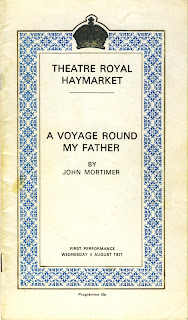 The stage door opened once again, and a stooped-over man wearing a large, shapeless hat and carrying a club bag approached. He had a very distinctive walk. You can’t mistake it when you’ve seen enough of his films. And my friend and I watched, our faces swiveling like synchronized searchlights, as Alec Guinness walked by. I was so awed that it didn’t occur to me to say anything. He got into the remaining taxi and off he went.

Another American high school theater tour was billeted at our hotel, and I learned the following later that week. A couple of the students saw “Voyage” a night or so after I did, and they had no trouble knocking on the big wooden door, where they were kindly received by the actor. He talked with them about the play and their aspirations, and told them a little about the Haymarket, which is a cultural landmark. “You really should have a tour of the place,” he told them, “and if you’ll come by at ten o’clock tomorrow morning, you can have one.”

They returned the following morning. Sir Alec gave them the tour.

Notes that was as surreal a trip as one can take. A clockwork orange indeed.

My unidentified companion is revealed: John Hallenborg, who had graduated from high school the year before and was trekking through Europe at the time. He decided to hit London at the time of my stay, somewhat to the faculty escorts' distress, as he had a reputation for being unpredictable, which is anathema to academia.