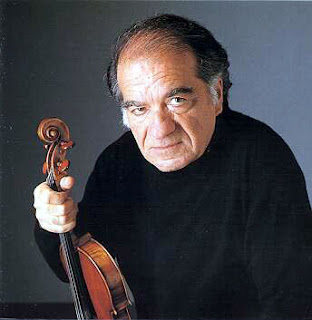 AS NOTED YESTERDAY, when I had the opportunity to meet Alec Guinness, I chickened out. “I was so awed,” I wrote, “that it didn’t occur to me to say anything.” Well: I was awed, all right, but I was also scared to death.

Here’s a story with a different outcome.

When I was in third grade, the music teacher, Edmund Finaldi, occasionally would play his violin for the class. “The Hot Canary” was a favorite, and I fell in love with the instrument. I took it up in fourth grade and have been dreadful at it ever since. But I got to know the violin repertory inside and out and still amuse myself by struggling to play it.

Around 1970, violinist Ruggiero Ricci was featured in a recording titled “Bravura,” playing works of astonishing difficulty. But these were a Ricci specialty.

A segment from a Locatelli concerto, a solo segment titled “Harmonic Labyrinth” features nonstop arpeggios, which requires a keen right arm as the bow skitters back and forth over the fiddle’s four string.

Franz von Vecsey’s “The Wind” puts a murderous series of double-stops in chromatic series, while Ernst’s “Variations on ‘The Last Rose of Summer’” starts with a pleasant rendering of the familiar tune and gets more devilish as it goes along.

But the Paganini pieces were the most technically gruesome of them all. His “Introduction and Variations on ‘Nel cor piu non mi sento’” plays havoc with an aria from an obscure Paisiello opera, employing one of the more challenging virtuoso techniques: alternating bowing and plucking. This requires you to pluck with your left hand, which is the one with which you’re holding the violin. And each left-hand finger does double duty, first stopping the string for the bow to sound a note, and then plucking the same string to sound a note stopped by the finger below. 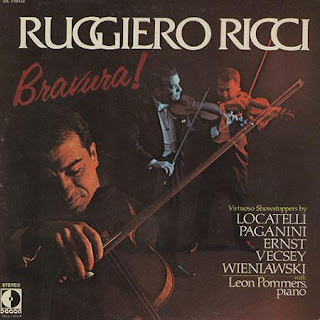 The record finished with Paganini’s unaccompanied “Variations on ‘God Save the Queen.’” This called forth playing that I thought was technically impossible, especially at a point where both hands obviously were doing the plucking and then a drone note sounded with the bow – even as the pizzicato continued with fully plucked trills!

By 1975, I was out of high school and had abandoned college and begun an odyssey of restaurant work in and near Ridgefield, Connecticut, where I’d spent most of my life. In November, the Danbury Concert Association, located in an adjacent city, presented a recital by Ricci. To be able to see him play those “God Save the Queen” variations would be the dream of a violin-obsessed lifetime.

The program didn’t list the piece. It opened promisingly, though, with Ricci and pianist Robin McCabe performing Tartini’s “Devil’s Trill” sonata, a piece that opens gently before hitting the tricky flourishes that give it its name. Followed by Bach’s Partita No. 2 for violin solo, one of the bulwarks of the repertory, finishing with a celebrated Chaconne that calls on all of the performer’s interpretive skills for its effectiveness. Ricci was, of course, brilliant.

The second half promised Prokofiev’s Sonata in D and Paganini’s “Nel cor piu non mi sento” variations. But with such a fiery finish, there would have to be encores.

The concert took place in the auditorium of Danbury High School. (The series, which continues to this day, has since moved to plusher digs.) At intermission, I wrestled with the prospect of bearding Ricci backstage with my request. The music-loving friend I was with egged me on. Backstage we went.

Being in a high school, we were in familiar-looking corridors of lockers and classroom doors. We’d only turned a couple of corners when we saw Ricci in the hallway, talking to a couple of others. He glanced up as we neared – I’m over six feet tall, and he’s considerably not – and I gushed, “Mr. Ricci, I’m really enjoying the concert.” He bowed and thanked me, and I went on: “I was wondering – can you play the ‘God Save the Queen’ variations?”

He smiled and said, “Of course I can play it. But I don’t think I should for this concert. You see, I am playing the ‘Nel cor piu non mi sento’ variations, and that’s the same kind of piece. And if they want more, I will give them the ‘Moses’ variations. But thank you very much for asking.”

I was being let down gently, but he did it so politely I could hardly complain. From a programming standpoint, his choice made good sense. Paganini’s “Moses” variations is based on a theme from Rossini’s opera “Moses in Egypt,” but it’s played only on the violin’s lowest string, the gutty-sounding G. It’s not only a contrast with the other Paganini piece, but it’s also calmer, and would mellow the audience.

My friend and I resumed our front-row seats. I can’t say I recall much about the Prokofiev sonata, which is too bad – it’s one of my favorites. But I remember the astounding sight of Ricci’s fingers negotiating the left-hand pizzicato passages from the Paganini that followed. It was written to dazzle, and dazzle it did, bringing the crowd roaring to its feet.

Calming though the “Moses” variations may be, it seemed to have no such effect on the audience, which rocketed to its feet once again at the end of it. Ricci took a bow, took another bow, took still another one – then he stopped at the stage apron and addressed the house. “I have had a special request,” he said, and turned and bowed towards my seat.

And that’s how I got to see the “God Save the Queen” variations performed in concert by the violinist who virtually owns the piece, and it was every bit as astonishing as I’d anticipated.

Note that as of this writing, he's still going strong at the age of 93!

I brought this to Ruggiero Ricci's attention through his website, and received a gracious reply from his wife, Julia, who wrote, "He is still, as you say, going strong, and he enjoyed your piece. He said he didn't remember being so well spoken or polite, and is glad that there are people who still remember him, when audiences actually knew and cared about what they were hearing, not just who they were seeing."