It’s the big one one one for the master violinist today. I’ve pursued his recordings since my teenhood, and, while I never met the man himself, I was privileged to have a couple of interviews with his recording producer, Jack Pfeiffer, who shared much information and many off-the-cuff stories about working with the violinist. By 1988, when the following piece was written, we’d already had a first round of CD reissues of classic LPs, and it seemed as if the audio engineers in charge had little idea of what they were doing in the digital realm. Subsequent remasertings were an attempt to offer improved sonics. 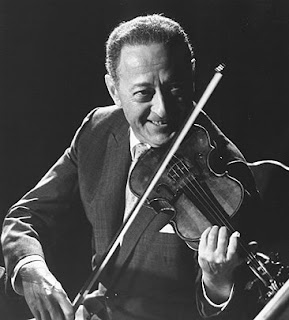 THE VIOLINIST'S SOUND emerges with recognizeable clarity and firmness, a clarity and firmness that characterizes even the noisy, tinny 78s of the 1920s. But these are recordings made three decades later, by the fiddler who most dominated the concert scene throughout his long career. And they’ve been remastered onto compact discs, extending the legacy of Jascha Heifetz into the digital age.

Earlier this month, RCA Records,1 for whom the violinist recorded almost exclusively since 1917, issued six CD sets to inaugurate the budget-priced Gold Seal line, including the ten sonatas by Beethoven and the six unaccompanied sonatas and partitas by Bach.

A collection titled “Music of France” features sonatas by Saint-Saëns and Faure along with a handful of shorter works by Debussy, Ravel, Ibert and Poulenc; “Showpieces” is an orchestral setting comprising Lalo’s “Symphonie Espagnole” and pieces by Sarasate, Chausson and Saint-Saëns.

lthough the albums are a fitting memorial to the artist, who died last December at the age of 86, the planning began last fall. “We were mastering the recordings in November,” says John Pfeiffer, Heifetz’s producer since 1959. “One of the biggest challenges is to equalize all the different sonic qualities so the sound is consistent. For instance, most of the works on the ‘Showpieces’ set were recorded at Republic Studios in California in 1951. But the Chausson ‘Poème’ was recorded a year later at a different studio and there are subtle differences in the acoustics.”

The sound quality of the new CDs, as befits the format, brings out detail that was easy to miss on the more noisy long-playing records. Pfeiffer takes responsibility for enhancing the sound on some of the early-’50s with stereo processing. “We have a new synthesizer,” he explains, “that does a marvellous job spreading out the sound without calling attention to itself.”

This is especially important on the “Music of France” disc, which juxtaposes true stereo and older monaural recordings. “It can be a shock for the listener to go from stereo into a middle-of-the-forehead sound, so I approved reprocessing of the 1955 Faure sonata.”

Although Pfeiffer did the experimentation for RCA’s first forays into stereo in 1959, he decries the rage for electronic reprocessing that soon followed and resulted in hollow-sounding records.

Another characteristic of the releases is that they won’t be available on LPs. “People have been embracing the compact disc very enthusiastically. The cassette tape is still popular on the market, but we’ve been watching LP sales drop to 20 or 30 percent of the market. I think in another couple of years we’ll be saying goodbye to an old friend.”

Early in the 1970s, Pfeiffer supervised the release of six four-record sets as “The Heifetz Collection,” the first set of which was a complete anthology of the violinist’s acoustical recordings – that is, records made before the electrical microphone was introduced in 1925 – and revealed the teen-aged artist to be every bit the firebrand that legend suggested.

“I get requests from all over the world,” says Pfeiffer, “for more Heifetz recordings on CD.” (The premium-priced Red Seal line now includes his stereo recordings of the mainstream concertos by Beethoven, Brahms, Bruch, Prokofiev, Sibelius and others.) “We’re starting to plan an issue of ‘The Heifetz Collection,’ which, if we can renew our contract with EMI in England, which owns some of the material, will be released in nine two-disc packages.”2

His informal count of the rest of the Heifetz catalogue on RCA comes to some 24 more CDs; this would include many chamber-music recordings as well as concertos by lesser-known composers, many of which were commissioned by the artist.

That catalogue also includes unreleased recordings and radio broadcasts. Some of the latter have been issued through the years on bootleg labels but Pfeiffer has always auditioned the material in the hope of legitimizing it.

“Heifetz always was very particular about putting out records,” the producer explains. “In 1975, I found a Brahms sonata that he recorded in 1936 but never approved for release. There were two takes for every side – they were on 78s – and I figured that some judicious splicing might produce an approvable master.

1. At the time this was written, RCA Red Seal (as the classical division was known in the late 60s) had been sold to Bertelsmann, and was being re-styled as BMG (Bertelsmann Music Group) Music. In 2004, it merged with Sony Music (which owned Columbia Masterworks), and remains a division of that empire.↩

2. In 1994, Pfeiffer finally was able to issue the entirety of Heifetz’s approved recordings as the 65-disc “Heifetz Collection” set, including the EMI recordings and the mid-40s sides Heifetz cut for Decca -- now long out of print. More recently, a 104-disc set was issued (at a much lower price) reproducing, in many cases, the the original LP’s cover art and running time. It omits the Decca recordings (which are available as a DG set) but includes a number of unissued recordings as well as the “Heifetz on Television” DVD.↩

Nice tribute to one of the great violinist. Well done and Happy Birthday Mr. Heifetz. -- Susan