Across the U.S.A. Dept.: When my wife and I crisscrossed the USA in 1989, our California stops were the Napa Valley, San Francisco, and, thanks to Citizen Kane, San Luis Obispo, which gave us access to a tour of the Hearst castle. It was a destination frozen in time, so I suspect you'll find much the same there now. 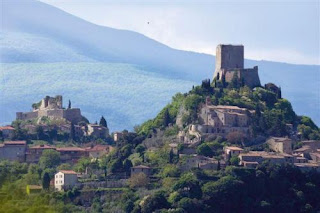 WILLIAM RANDOLPH HEARST never got to be president, but he built a monument to himself that attracts more attention, national and international, than anything left behind by  his political betters.

And whether Hearst and his papers liked it or not, the movie Citizen Kane captured the flavor of that setup pretty well. The place is fairy-tale immense, with trees and wildlife still a testimony to a man’s ability to surround himself with beautiful things found in nature – but not necessarily found close by.

The trees that line the long driveway to the castle, for instance. Some two dozen varieties shade the drive and hillside, and not one of them is native to the area. Like all of the Hearst castle doodads, they were trucked in. At an expense you and I don’t care to hear about.

The estate, a would-be white elephant, now belongs to the State of California – and it has proven more profitable than anyone could have predicted. The four tours that are conducted daily bring in the money. And I don’t mean four tours a day – I mean four separate tour routes that are each travelled several times a day. Take one of them and you’re hooked. You have to see more. That’s why the motels in the surrounding villages do so well.

It’s also why Highway 1 is kept open the year round.

Now, it’s obvious that Nature never intended a highway to be placed on this part of the Pacific coast. A serration of craggy bluffs snakes down from San Francisco and the road has been blasted into place like an amusing afterthought.

And it’s the only way to get to the castle from the north. Which may be just as well. You’re taught respect for the wonder of the countryside as you’re driving, negotiating curves that spiral like a crazy seashell, a high rock wall on your left, the Pacific lapping wildly below you, far below you, on your right.

You limp into San Simeon and fight for lodging. And book your first castle tour, surprised to pay the high fee of ten dollars, annoyed by the complicated business of cancellation penalties that’s explained.

At the foot of the castle hill is a tourist center. Gift books, videotapes, the ubiquitous collectible spoons. It’s one busload per tour, so when your trip is called you herd with the rest into a cranky old schoolbus that creaks and groans as it climbs the winding driveway. A canned greeting takes you up the hill.

And the place comes into view the way Manderly must have. It’s big when you first spot it. It distracts from the abundant wildlife on the hillside, the descendants of the beasts hauled there to form Hearst’s personal zoo – and it only gets bigger and bigger.

“The castle was not brought in stone by stone, as some stories would have it,” Doyle explained, patting a wall. “This is concrete and steel. It has to be – it’s built on a triangle of major faults. Yet the reflecting pool has not shifted even a sixteenth of an inch since it was built.”

Design of the structures turns out to have been the brilliant work of a young architect named Julia Morgan. French trained and classically inspired, she tolerated the master’s whimsy year after year as he burbled his undisciplined wishes. It was she who took the various ingredients he collected – a column here, a pilaster there – and wrenched them into the beautifully classical form the mansion attained.

Doyle spoke of her with awe, and he should know. He’s a journeyman tour guide who can answer any and all questions and do so with easygoing wit. “These are the questions I’m most commonly asked,” he said to forestall the crowd: “How music did it all cost? Was Hearst a Catholic? Do the Hearsts ever visit the castle? Have I ever seen Patty Hearst? Why are the beds so long? Why are the beds so high? Does this place make any money now?”

He paused. This is what you’re paying for, and it’s worth ten bucks. A sixty-minute theatrical performance, in the round, on the world’s most costly stage. “The answers are: I don’t know, no, yes, yes ... ” He laughed. “Actually, as to the first question, we can only guess. We figure it comes in somewhere between ten million and 400 million dollars. William Randolph Hearst was a Shriner, so any Catholic affiliation is very doubtful. Yes, I’ve seen Patty, but when any friends of the Hearsts want to visit the castle they’re usually sent on one of the tours.”

William Randolph was born in the right time and place to get himself wealthy. His father was a miner smart enough to strike it rich and stay that way. Dad bought a 40,000 acre ranch on which he placed cattle, enlarging the property until it reached a quarter of a million acres, or half the size of Rhode Island. WRH inherited the estate in 1919 and hired Morgan to design what was originally going to be a bunch of guest houses. For almost thirty years work on the place continued.

The buildings themselves – and there are several, including guest houses that make your everyday mansions look puny, indoor pool, and screening room – are works of art. Inside them still more art abounds. The tours take you through, shuffling along specially-placed lengths of industrial-strength carpet, guides in front and rear watching to be sure you don’t touch.

If you’re like me, you’ve only seen the representation Orson Welles placed in Citizen Kane, calling the castle “Xanadu.” The movie was not a Hearst favorite, so I was curious to discover if Doyle would mention it.

Only toward the end, when we were shown an elaborate mosaic inlay Hearst had placed in the foyer of his main building. “This is the kind of thing Marion Davies liked to put together,” Doyle said. “As you saw in Citizen Kane.”

But I got to thinking about another scene, wherein the shadowy reporter goes to the Thatcher memorial vault to research his subject. Stiff-armed guards are there to watch him as he reads within a high-ceilinged, barren room.

What does it all add up to? the movie asks, and it’s easy to ask the same question in San Simeon. Back at the visitor’s center you can tour a well-illustrated memorial to Hearst that trumpets his achievements. But the movies he produced were second-rate and the newspapers and magazines helped erode standards of journalism. And all of it was accessible to him because of wealth, not talent.

His monuments stands as a grave, massive tribute to self-indulgence. See it and marvel at the beauty of it, then drive back on Highway 1 to remind yourself that beauty really needs no gilt-edging to endure.