Where Is the Love?

Read the Manual Dept.: We seem headed for an early spring, when Nature gets all meltish and randy. Here's a piece I wrote a couple of years ago on spec for a publication that decided not to use it. And I can see the point: their demographic was well past the point of requiring such advice. 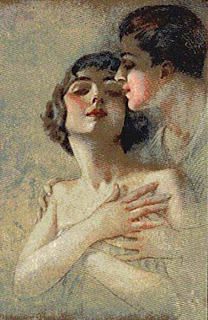 THIS WAS A MOMENT of truth. You don’t get many so monstrous. This was the moment when his manhood would be tested, but more than that – this would establish him as a lover. Or a schnook.

We’ll call him Albert. A childhood friend, with whom I’d staggered through an adolescence of misinformation and fantasy. On top of him lay a beautiful, incredibly desirable woman. She had dark hair and shiny dark eyes and a heart-shaped, light-olive face set off by fabulously pliant lips that at that moment were pressed against his. We’ll call her Victoria. She was about his age at the time, which was 18. He was a virgin. She was not.

Sex is a collection of straightforward equations of cause and effect, if you’ll indulge a nerdish point of view. Don’t immediately touch here when you can enjoy a more effective journey from here to here to (eventually) here. To be effective, romance requires strategy. But we’re now in the early 1970s, the height, that is, of the sixties, a far more innocent time.

To recap: he’s supine, she’s prone, their lips connect, his left hand wanders. He’s heading for a complicated piece of anatomy with which he’s experientially unfamiliar. But he’d hit the books  beforehand.

“I grew up looking at my mother’s OB-GYN texts,” he told me. “Which meant that I knew women’s bodies as a cutaway view with lots of squiggly areas. It was a totally unsexualized thing.” Puberty changed his perspective. Assuming a general unavailability of women willing to disrobe for his inspection, he sought other sources of information.

He learned the landscape. He learned what was reputed to produce the most impressive results. It never occurred to him that he simply could ask. But does that occur to any of us so early on?

With so much Victoria at hand, Albert risked a venture beyond the Playmate-photo comfort zone. “I was able to extend my arm just far enough to bring my fingers in contact with her gusset,” he explained. “Keep it clean,” I growled.

He found his target. It was unexpectedly slippery and thus resisted a close fingertip exam. “I tried to visualize what my fingers encountered, and it seemed all wrong. Then I realized: It’s upside-down.”

Every component of his  research clicked into place. While maintaining, high up, his osculatory rhythm, he added a counterpoint in the lower clef. Stay off the bull’s eye, his reading had advised. Circle the target. Be aware of every reaction; gauge each foray accordingly. It was mere minutes before his efforts paid off, and she rolled onto her back to lay beside him and exclaimed, “Where did you learn that?”

Which was a huge confidence boost for him, and eased the future stages of the journey. I fact-checked the incident with Victoria, who confirmed Albert’s digital dexterity, and went on to confess that she’d been in a similar situation one relationship earlier. “Don’t tell Albert,” she begged, then went on to describe one of her first dates with a fellow whom, for the sake of simplicity, we’ll call Albert, although we’ll not refer to him by name again.

“He was a swaggering sort,” she said, “full of what seemed like self confidence.” He was aggressive enough to get beyond smooching by the second date, but plateaued at rummaging around her Maidenformed torso. “I knew I’d have to take it to the next level,” she said.

She knew what she was prepping for. No amount of bashfulness – and she was sure that shyness lay behind his braggadocio – can hide a guy’s excitement, and her goal was to offer him physical freedom where she was sure it mattered most.

“My Mom and Dad had The Joy of Sex and Everything You Always Wanted to Know about Sex hidden in their bedroom, but kids have a lot more time on their hands than parents think. Even before I found those, I looked up all the interesting body parts I could think of in the dictionary. And I found the word ‘frenulum,’ which fascinated me. I went to the library and looked that word up in a bunch of different books, and it was amazing the amount of detail they provided.”

Armed with a roadmap of her destination, she turned to her parents’ library for tips on technique. By the time she had matters in hand, she knew how to punctuate a steady, reliable, emollient-enhanced base rhythm with short bursts of variety, making each a tempo return the more pleasurable. The payoff, she said, was even more thrilling than she’d hoped.

All of the guidebooks agree that there’s no better barometer of a partner’s pleasure than what that partner offers in spoken guidance, but relationship beginnings are often awkward times. You’re still learning what will be the language of your liaison, and you want to enter your alliance demonstrating that you have at least a little on the ball. Do your research. It shows that you care.