When I parodied the poem "Casey at the Bat" for my 2004 election admonition (posted yesterday), I was following a tradition of many such re-workings of Ernest Thayer's famous saga. It found initial fame in 1888, the year it was written, when it was declaimed from the stage by popular performer DeWolf Hopper, who later recorded it. It has been portrayed in movie and cartoon and on television. Sequels have been written. And, inevitably, there are musical settings. One of the most enjoyable is Johnny Bench's declamation of the verse to a score by Frank Proto, but the best one I've seen is William Schuman's one-act opera, written in 1953, but touched up a bit for Cooperstown's Glimmerglass Opera in 1986. This production was so acclaimed that it helped move the company from a high-school auditorium to the beautiful lakeside facility it continues to enjoy. 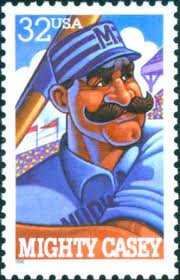 IT WAS THE BEST 75th birthday party a composer could want: Congratulations from the president, a first-rate production of an opera dear to his heart, and an enthusiastic crowd to share in the fun.

Composer William Schuman has been an avid baseball fan as long as he can remember (“lt was my youth,” he once confessed) and, in 1953, he combined hobby and profession by writing a one-act opera based on the poem “Casey at the Bat.”

This season’s performance by the Glimmerglass Opera Theater salutes Cooperstown’s bicentennial and the 50th anniversary of the Baseball hall of Fame.

Schuman was on hand at Wednesday night’s opening to share in a tribute to these occasions from President Reagan before the company launched into a performance that burned from beginning to end with the wonderful fire of inspired production.

Everything — cast, musicians, dancers, setting — came together for a thrilling event.

And that included the second one-act opera of the evening, Puccini’s merry “Gianni Schicchi,” as different from “Mighty Casey” as could be imagined.

Ernest Thayer wrote his famous baseball poem in 1888, reacting to a newly organized sport that already had become an obsession. In the florid language of the period, the pomp and glory of the home team’s critical game takes on a hollow sound when hero Casey fails to come through in a ninth-inning clutch.

The poem is so well known that there is no chance of suspense in the opera and Schuman and librettist Jeremy Gury wisely sidestep it in favor of a look at the characters and the atmosphere of the period. “You know how the game turns out,” an avuncular watchman says as he invites us into the Mudville Stadium.

As designed by Peter Dean Beck, the set is a clever representation of turn-of-the-century Cooperstown. Scene One takes place on Main Street before the game, in front of a row of a old-time storefronts where shopkeepers lounge in braces and boaters.

The music begins with a percussive, parade-like sound that gives way to a nostalgically tinged melody when we first see the street. This is no “Take Me Out to the Ballgame.” It is a melodically complicated but always American examination of the folk-hero, an archetype practically created by baseball’s early years.

Nothing is said or sung in the opening scene we watch the townspeople prepare a pre-game parade, complete with marching band. And then the storefronts swing back to reveal the stadium front (modeled after Doubleday Stadium), where the Watchman (Brian Steele) invites us to the game. “This is the story of what is known far and wide,” he says, suggesting, however, “maybe something else will happen.”

But there is little chance of that when pitcher Snedeker (Alfred Anderson) Is advised by catcher Thatcher (Steven Owen) that Casey can’t hit ‘em high and inside, a pitch Snedeker promises to put over at the appropriate signal.

The team is introduced with a comic “add-on” song, “Twelve Days of Christmas” style; each has an off-the-field profession to tell us about. And then mighty Casey enters, to the cheers of his fellows, on the arm of his sweetheart, Merry (Carla Cortner). Played by actor Paul Jackel, Casey has not a single line in the opera but communicates volumes with his stance and expressive face.

The Stadium walls open, fans crowd the bleachers and we are in the ninth inning. The Watchman, on a tall ladder, begins a recitation of the poem.

Wonderful confrontations ensue. After Casey’s first strike, manager and umpire face off.and while kicking sand in the best Billy Martin manner, manager Irwin Densen sings a funny “Listen, Listen, Listen, Listen Ump.” To which self-righteous Bruce Kramer responds with “As the Umpire of this Game,” a solemn explanation of just why he is so correct.

The crux of the piece comes from pitcher Snedeker in “Consider the Drama of the Moment” –  few other occupations can pack so much tension into such a short space of time and the fortunes of all the players depend on an unpredictable combination of skill and luck.

Schuman’s music makes the most of the tension, drawing out the inevitable conclusion with these insights. As Casey makes his final swing, the lights go out and a gentle whoosh is heard: then the crowd sings a slow, affecting choral setting of Thayer’s last stanza.

“Stay a moment – don’t go,” the Watchman pleads. “What’s in Casey’s mind? How does a man survive such a thing? How does he live with himself? Who helps him? What helps him?” The answer comprises a short Scene Three: Casey is back at the plate, recreating the moment. This time he hits that homer, rounds the bases – and is met by Merry, who walks him off the field. It is a gentle triumph rescued from bitter defeat and that spirit of optimism reflects what is truly patriotic about this opera: of all the American traditions lately celebrated, this “frontier spirit” seems to be most neglected.

Music director Charles Schneider made magic with the orchestra, firmly supporting soloists and chorus in a difficult score. This is the best of what American opera has to offer and what company could come up with a better setting? As Schuman himself observed after the joyful conclusion, “‘Mighty Casey’ should be to Cooperstown what the Passion Play is to Oberammergau.”

An entirely different world is created in “Gianni Schicchi,” Puccini’s only comedy. Taking its inspiration from lines in Dante’s “Divine Comedy,” it is the tale of an unscrupulous family trying to change the will of a recently deceased curmudgeon.

The setting is medieval Florence, in the bedroom of the late, not-too-lamented Buoso Donati. Singers Steele, Densen, Anderson, Croft, Kramer and Cortner return as the family, with Joanna Levy as the bossy, massive matriarch.

Buoso left his money to the friars, but young Rinuccio (Evan Bortnick) thinks his would-be father-in-law, the wily peasant Gianni Schicchi, can come up with a plan. He exacts a promise from the family to let him wed Schicchi’s daughter, Lauretta (Stephanie Conte), and goes in search of the man.

Jack Eddleman makes a big entrance as the Falstaffian title character. Eddleman also served as stage director for the two operas, and displays as fine an acting and singing talent as he did a director’s hand. He knows how to design and encourage comedy and keeps it funny without resorting to silly business. Of course, “Schicchi” thrives on a certain amount of business but all was kept in character.

Puccini was a master of richly orchestrated melody and this short opera has its share of memorable moments. Lauretta’s aria, “Give Us Your Hand,” commanded a deserved ovation and there is a funny device of giving the lovers a poignant duct about the Florence they love, a melody parodied by Schicchi as he warns the assemblage of the consequences of forging a will. Once again, all aspects of the production were right on target, beginning with Beck’s cockeyed set and including each member of the cast and orchestra.

If there was anything to lament, it was the surprising number of empty seats in the house. Glimmerglass Opera usually sells out on opening night – is the prospect of non-repertory opera so intimidating? Basebell has never been so well celebrated and the Puccini is a comic delight. To miss these would be a serious strike-out.