Vintage Showroom Dept.: This piece, from a 1987 issue of Metroland, enjoyed some reprints in other alternative weeklies. Sure, much of the technology described herein is dated, but I think the sentiment endures. 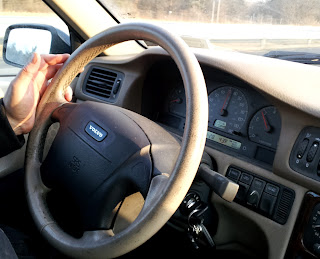 WHEN I WAS 16 and learning to drive, a high-school friend took me out in his dad's BMW to give me some pointers they don't teach in Driver Ed.

“You know that ‘hands at ten o'clock and two o'clock' stuff?’” he said. “Forget it. You only need one hand to steer with. Leave your right hand free. Let it kind of dangle near the stick so you're always ready to shift.”

He was teaching me style, that most ephemeral quality – a quality that  resists being taught. It's not enough, his lesson suggested, merely to get out and drive; you need to look cool while doing so.

Driving benefits from that sense of style more than any other occupation save, perhaps, polo. It's your only means of communicating with fellow drivers (unless, of course, you use a CB radio, which right away is a fatal breach).

Style isn't leather gloves and hood ornaments of discreet nudes; an old Dodge Dart has style if it's driven stylishly. The key is the driver's attitude, sparked by a few more techniques I'll suggest.

Most important is the driver's attitude and self-awareness. It's a discipline of mind and body. You must be the master. Just as dog owners grow to resemble their pets, so too do drivers begin to look like their cars if they're not careful. Is the chrome on the front bumper beginning to rust? That's no excuse for not shaving daily. Groom and dress nicely in spite of your vehicle: you'll make it look good.

Dress for driving. Stylish ragtop owners instinctively know what garments billow nicely in summer, but stop short of the foolish affectation of a scarf. In a low-slung car, a Triumph, say, where most of you can't be seen, a good cap can say plenty.

It's a sad given that most of the drivers around you are morons. They won't appreciate your efforts, but they will bow to your superior standing. Try not to show your contempt in the way you drive. Pass politely. Give the finger only to drivers who share your pigmentation; too often, the lowlife seizes upon a driving controversy as an opportunity to try to settle generations of ethnologic dispute.

Speeding can be stylish if it's not cluttered with hardware. A discreet-sized radar detector and some common sense are all that is really needed; remember: the cop just needs to nab someone, it doesn't have to be you. There are plenty of two-toned behemoths with Jersey plates racing by; why outrun them?

A good car is meant to go fast; a nice highway is meant to go fast on. But beware of a boulevard like New York's Northway: the “Adirondack Autobahn,” as it's known locally, has been taken over by Canadian truckers who hose small imported cars off their grills at the end of a run.

Style is a matter of professionalism. The professional driver knows, for example, how to go through a tollbooth without performing an Eastern dance in the front seat, writhing to unclasp a change purse, grimly counting out money in the dark.

And asking directions from a tolltaker is about as refined as asking a waitress for a date: just because they're there doesn't make them your servants.

To many, the auto itself is an extension of the personality and is cared for and decorated as such. The stylish driver understands that a car should be dressed only as ostentatiously as one's wardrobe, and that people should be forced to wear the same bumper stickers, signs, oversized dice, flashing lights and religious icons upon their bodies as are affixed to the car.

Keep the car clean. Keep it neat. Wash it and wax it but try to spend no more time at those activities than you would at brushing your teeth and cleaning your nails. Those chores are like newspaper advice columns: fascinating only if you've got time to waste on them.

Obviously, your car and your driving will play key roles in your love life. Here is where an awareness of style becomes most useful. An automobile is only a vehicle, a means to an end. It should be used to heighten the excitement; satisfaction comes later and elsewhere. Face it: grappling in the seats is for those who roll cigarette packs in their shirtsleeves. That's why a popular car was named “Prelude.”

The stylish car is classy enough that no one else on the highway is forced to share your music. Driving, to the stylish, is a fanatical activity that borders on the sacred, and the tunes should be properly matched. Miles Davis and Gerry Mulligan always deliver; on the classical side, try piano music by Sibelius or Scriabin. Beware the driver with “new age” on the deck: we're talking someone who's rarely sure that he's left the driveway.

How can you tell a truly stylish driver? Don't look for a chauffeured limo: this driver is self-propelled. Don't look for a car phone: that invites another activity that, like sex, should be performed elsewhere. Style is a state of mind so devastatingly hep that a breakdown to this driver only means that the party shifts to the side of road while awaiting the Triple-A truck. You're invited.