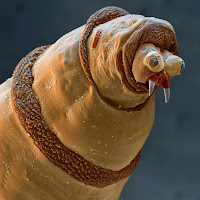 DESCRIBING THE LARVAE of Brachyceran flies, Brian Handwerk revealed the surprising benefit these creatures offer in a 2003 article for National Geographic News, which read, in part:

“Five to ten maggots are placed on each square centimeter (0.2 square inch) of a wound, which is then covered with a protective dressing that allows the maggots to breath. For the next 48 to 72 hours, the maggots dissolve dead tissue by secreting digestive juices and then ingesting the liquefied tissue and bacteria. The maggots grow from about two millimeters (0.08 inch) to nearly ten millimeters (0.4 inch) while doing the doctor's dirty work.”

They’re more commonly seen (and smelled) as a scourge, a feature of hot summer days and rotting, meaty organics. With that in mind, come visit a couple of restaurants with me. I promise that this will be a trip you won’t easily forget.

The first serious money I ever made was as a waiter in a restaurant called The Horse & Hound Inn, located in a historic building in South Salem, NY, a little over an hour north of Manhattan. This is solid commuter country, but with a layer of wealth suggesting that five-days-a-week commutes weren’t necessary.

I learned here the first and biggest lesson of the restaurant biz: it’s all illusion. What looks white-linen-y elegant in the dining room becomes more catch-as-catch-can in the kitchen. The Horse & Hound continues to operate but has long since changed hands. We’ll call the chef-owner during my mid-70s residency Kurt.

He was an extremely skilled chef, although he’d figured out a lot of shortcuts. The menu featured soufflés (“I love this,” he said. “I’m selling air!”) and wild game. The pheasant was par-cooked and then frozen. The buffalo steaks, which he advertised as marinated in bourbon with wild hickory nuts, never knew such rarefied company. And the wild boar tended to get roasted significantly ahead of time, then sliced and reheated to order in the cumberland sauce in which it was served, fanned atop a side of rice.

The sauce, which is classic, is a thick gravy of fruit (I recall plums being involved) and savory herbs and a touch of vinegar, achieving a nice pork-complementary sweetness.

It was a Sunday afternoon in August. Kurt was young and good looking and with a devilish charm that he parlayed into an impressive succession of first dates. This particularly Sunday, he was taking the woman out to dinner elsewhere. No reservations were on the book, so he left me in charge of the dining room and promoted his teenaged dishwasher to the line, instructing me (at the far end of my teens myself) to help the kid, as I’d been learning my around oven and stove.

Significant summer heat let up very little as we eased into evening. A window-mount air conditioner struggled to offer comfort to the few who wandered in, while the kid kept the dishes coming out admirably well.

Kurt ran his business on the edge of financial disaster, and thus had been unable to do anything right away when the compressor in the walk-in box stopped working the night before. We put all the ice we could spare in a corner of the box and crowded the highly perishables near it. But the wine bottles we kept there to chill all bore the perspiration of rising-temperature blues.

It’s rare to see someone dining alone. Rarer still when it’s a woman. To my nineteen-year-old imagination, the very attractive lady who did so that night had a story tinged with melancholy to tell, and I was undismayed by her apparent age. Women in their 30s often prefer young guys, I reasoned. But I was unable to break out of my tuxedoed-waiter dignity, which I performed with Jeeves-like reserve. I took special care to describe the menu nicely, and she ordered . . . and even when I served her entrée of wild boar, I could think of no way to ease this relationship into anything more intimate.

Annoyed with myself, I sought the solace of the kitchen, where the kid had a question for me. “How long has Kurt been putting the rice inside the boar?” he asked.

The meat was rolled and tied, slightly pink in the center. Where something wiggled. I shook the roast over a counter and what might have been the sound of raindrops accompanied the landing of a series of tiny white worms.

The kid drew back with horror on his face. “What is it?” he asked.

We realized it at the same time. “The lady,” he said.

Christ. I could already see the headlines. Even if I weren’t hauled up on some kind of charge of poisoning with intent to disgust, the restaurant itself might close and there goes my income. “Let’s think about this for a moment,” I told him. “It was served on rice. It had the cumberland sauce over it . . . I’d better go out there and check.”

She looked up with a delightful smile as I neared. “Everything all right?” I asked, trying to get a closer-than-usual look at her plate.

We got rid of the rest of the offending roast, but otherwise left well-enough alone.

It wasn’t long before my native misanthropy drove me from the floor to the kitchen. I was hired to work the line at The Elms Inn in Ridgefield, Conn., a place that’s also still in business, also under different owners.

During my time there, it had been operated by the Scala family for nearly 30 years, with a menu of solid old-time continental fare with a bit of Italian here and there – but not too much. Italians had gotten into Ridgefield as the gardeners and domestic staff of wealthy exurbanites, and the fact that they’d grown into a vital and autonomous part of the population still scandalized some of the old guard.

Almost everything was cooked from scratch, which invited an efficient use of ingredients. We tried to use every bit of everything that came through, from the meat trimmings to the celery tops to even the eggshells, which joined the fryolator oil and other grease products in a barrel we kept in an outdoor shed, and which was picked up once a week by a rendering company in Bridgeport.

One summer, its drivers went out on strike.

We filled a 55-gallon drum and found another somewhere and began filling that one, too. And it was soon clear that we’d need a third before any drivers showed up. And then we started filling a fourth, all crowded together in this stifling little room.

At the end of every shift, one of the line crew hauled the bucket of grease to the shed. By August, it was necessary to draw a deep-as-possible breath while a hundred feet away and hold it while blurp-blurp-blurping the sludge into the barrel. The stench was nauseous. Unbearable. And to add to the task’s retch-inducing aspect, each of the barrels had developed a white, wriggly penumbra of maggots, a kind of larval blur that looked as disgustingly menacing as anything that’s ever oozed or dripped in an angry sci-fi movie.

As we contemplated the horrifying possibility that we’d need barrel number five, the strike was settled. A truck showed up. And I was there to see a short, fat, grubby-looking man leap from the cab and take on the task of adding our effluvia to the truck’s toxic payload. He wore gloves from which the finger segments had been trimmed. He grabbed each barrel at rim and base and humped it to the vehicle and poured the contents in. He whistled happily as he did all this. He saw me and grinned. And we had a brief exchange I shall never forget.

“Yeah,” he replied, laughing. “And all of this shit is gonna become fuckin’ lipstick.”