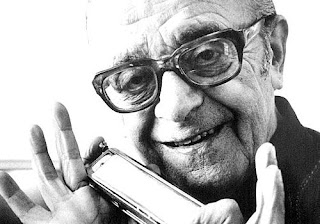 THE CHALLENGE OF “Hora Staccato” is to make the long, descending phrase that gives the piece its title sound smooth and crisp. It’s one of a violinist’s toughest challenges, and became a hit for Jascha Heifetz when he started playing the arrangement he made from a Grigoras Dinicu piece. Then the piece exploded into the mainstream. You can catch an old movie of Harry James wailing it on trumpet, and I once found sheet music for a version for ukulele quartet.

So it shouldn’t have come as a surprise issuing from Larry Adler’s mouth organ. He’d already played a movement from a solo violin sonata by Bach. But he was performing in a Manhattan jazz club, in a set that included Gershwin and Porter and a short, effective version of Ravel’s “Bolero.” “Ravel never allowed this piece to be changed in any way,” Adler told the audience. “But he gave me permission to do this, and he enjoyed it.”

It’s Larry Adler’s birthday, as good a reason as any to pay tribute. I saw him perform a couple of times at that club, when I lived nearer to New York, and at some point in the 1980s when he played at a theater in Woodstock with Ellis Larkins at the piano.

Adler’s act was a mixture of comedy and music – he even wrote a book about joke-telling – which made it easy to forget how insanely good he was at his instrument. He preferred the term “mouth organ” to “harmonica,” possibly in pursuit of more dignity. (I suspect he resented fellow-player Johnny Puleo’s appropriation of the term.)

His career began in the late ’20s, when he was still in his ’teens. One of his early gigs was with Ruth Etting, at the behest of her racketeer husband/manager Moe Snyder, known as “Moe the Gimp,” the tale of which figured in Adler’s act. He went to work for Ziegfeld, and soon was seen in revues on both sides of the Atlantic.

He also caught the compositional ears of the likes of Milhaud, Vaughan Williams, and Malcolm Arnold, who were among the many who wrote pieces for Adler. That’s where I became familiar with his playing, thanks to a classical recording featuring those works.

Ironically, I was listening to it in my home town of Ridgefield, Connecticut, with no knowledge that Adler had lived in that town in the ’40s, fleeing to London when fellow-Ridgefield-ite and notorious yellow journalist Westbrook Pegler joined the blacklisting hysteria of the time and went after Adler for his communist sympathies.

Adler lived the rest of his life in London – he died in 2001 at the age of 87 – but made frequent trips back to the U.S. for gigs once the nonsense died down. He wrote the score for the movie “Genevieve” and recorded prodigiously, both classical and jazz, although the reissue market hasn’t served him as well as it might.

He capped a fascinating career with an 80th-birthday recording in 1994, produced by George Martin. “The Glory of Gershwin” charted in the U.K., and featured Adler on both mouth organ and piano (simultaneously, in the case of “Summertime”) and in a version of “Rhapsody in Blue.”

Check out his work for yourself with that album or an in-concert collection like “Live at the Ballroom.” You’ll be amazed at the shades of color a mouth organ can provide.