From the Recent Past Dept.: A Metroland essay from a couple of years ago, which failed to win me a single dinner invitation. Oh well. 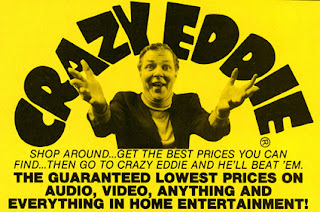 RARELY AM I INVITED to anyone’s house for dinner. The cry is, “I’m not going to try to cook for you!” If I’m visiting a house where food is being served and my occupation is revealed, the invariable and annoying question is, “Are you gonna review this?”

Back in the ’70s, a New York City-based electronics retailer called Crazy Eddie ran a series of TV commercials featuring a wide-eyed pitchman named Jerry Carroll who ended each frenetic spot with the phrase, “His prices are insane!” Carroll and his wife showed up one night at a restaurant where I was cooking, and the chef insisted they be shown to the kitchen.

The Carrolls were fine-dining enthusiasts, and we invited them to a special thank-the-customers party given each January. There I watched one annoying diner after another recognize Carroll and say, “Hey! It’s Crazy Eddie! Hey, hey – Eddie! Do the Crazy Eddie thing!”

Jerry would smile bashfully and say, each time, “Oh, I only do that for money.” A charming, delightful fellow. I’ve swiped that response for my own purposes, trying to insist to party hosts that I don’t view every meal as a gourmet test and they're certainly not going to be graded.

Not that I’m trying to cadge dinner invitations here, but it’s time to confess that I’m happy to bypass the complexities of an excellent beurre blanc if some manner of butter sauce is otherwise available.

For example, placed alongside the salmon-colored island of fish inevitably rising from one of the steam table trays at a Chinese buffet, an island of fish in fact purporting actually to be salmon. Which brings me to the guilty pleasure.

Yes, I like Chinese buffets. A gastronomically horrible guilty pleasure, but a g.p. nevertheless. There are high roads to be taken if you’re looking to preserve your health. A few pieces of the putative, typically fish-free sushi dipped in watery wasabi can fill you up. A cup of wonton soup, minus the crusty accompanying wontons. Or, if you choose the right place, a hot just-cooked bowl from the Mongolian grill station, assembled yourself from a selection of stiff, colorful meat-like products enhanced with veggies and sprouts and the sauces of your choice.

But a tasty bite of greasy shrimp toast throws all dietary concern out the window, and soon I’m piling up the crab rangoon, the doughy General Tso’s chicken, the chewy Hunan beef and that over-the-top combo of peanut butter and chicken.

And, no matter how self-conscious I’m beginning to feel by my fourth trip to the food, I can always count on seeing someone fatter than I am, inspiring the perfect mix of schadenfreude and self-pity – and spurring me to that final trip to the ice cream machine.

In the realm of sweet stuff, I spent a few years working the second-most notorious doughnut consumption job: morning radio. Nothing improved the sound of my voice (and the windscreen on an ElectroVoice RE20) better than a fine spray of coffee and cruller, but the crullers, at least the Dunkin Donuts variety, were axed in 2003 as the operation went fully machine-run. The so-called French crullers still offered (sometimes) have nowhere near the magic proportion of sugar and crunch and fryolator residue.

So I’ve shifted my dessert guilty pleasure to something I have to make at home: nutella calzones. Wrap a slab of pizza dough around a jar’s worth of that sticky chocolate-hazlenut stuff and some sweetened ricotta or marscapone, then bake at the hottest oven setting until the filling oozes onto the tray and starts browning. Eat it hot. Lob some ice cream at it.

Is it as guilty a pleasure when you have to cook it yourself? That’s the only way I can enjoy pancakes (mine have a batter partially leavened by whipped egg whites), or yeast waffles, or cheese toast studded with pickled jalapeño slices.

I can cook hot dogs at home, sure, but that’s not as fun as grabbing a stool at the counter and asking for six dogs all the way and watching as these wursts are popped into their rolls and slathered with onions and meat sauce. I’m talking about Famous Lunch, downtown Troy’s best throwback diner, although Gus’s in nearby Watervliet is my warm-weather alternative.

The dogs are small enough to demand that you eat more than one, and cheap enough to lull you into downing several. The pleasure begins with the satisfying snap of the casing as you bite into each successive dog and only ends after you finish the chunk of pie you weren’t going to order, but . . .

Then there are burgers. Back in the late ’60s, a friend and I skipped high-school Speech class once or twice a week in order to make a run to a new fast-food restaurant in town. (We nevertheless both ended up as professional radio announcers.) Our orders were always the same: a Big Mac, fries and soda. There’s no question that McDonald’s now is an insanely evil corporation, stripping rainforests for its chicken feed and meat-flavoring its fries. But their worst crime was changing the plump, meaty Big Mac into a pasty simulacrum of the original.

So I’ve defected for my guilty-pleasure burgers to the Five Guys chain. You get a twin-burger sandwich that you garnish as you please, and the fries are the best in the industry. And, of course, they dump plenty extra  of those fries in your bag, so don’t fill up on the free peanuts there.

All of which means that, when you do invite me over, you need only throw some pizza my way, or chips I can dredge through store-bought dip, or maybe some Chinese take-out. I won’t review. I won’t complain.