Fleisher in the Studio

WAYLT Dept.: I warned you in this posting that the Leon Fleisher Complete Album Collection was coming. It's here.

HAD THERE NOT BEEN a lengthy interruption in his career, pianist Leon Fleisher undoubtedly would have filled out his catalogue of recordings with an impressive sweep of works old and new. His performing career began in the 1940s, when he was in his teens, and his recording career began in 1954 on Columbia’s subsidiary label Epic. Although his early solo-piano recordings ranged from Schubert’s Sonata in B-flat, D. 960, to Brahms’s Variations on a Theme by Handel, he really hit the ground running when collaborating with George Szell and the Cleveland Orchestra. 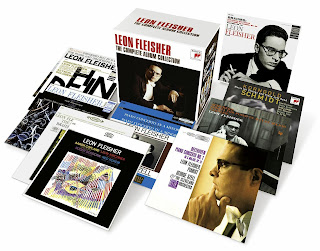 Their 1958 recording of Brahms’s Concerto No. 1 remains for me the finest performance of this piece, and – perhaps because it was so early in the stereo era – the articulation of the orchestra reveals details you won’t hear anywhere else. This was a benchmark work for Fleisher, who already had performed it with Szell, but they went on to capture the same magic when they laid down Brahms’s Concerto No. 2 in 1962.

Between those events came all five of Beethoven’s concertos, with Mozart’s Concerto No. 25 and the warhorses by Grieg and Schumann as well. The Fleisher-Szell catalogue also includes a mono recording of Rachmaninoff’s “Rhapsody on Theme of Paganini” and Franck’s “Symphonic Variations.”

Into the 1960s, however, Fleisher began noticing a problem with his right hand, a problem eventually diagnosed as focal dystonia. He would commit a handful of sonatas to disc, but after his 1963 recording of Schubert’s “Wanderer” Fantasy, he faced what would become forty years of a completely changed life in music.

Sony Classical, which owns the Columbia/Epic catalogue, recently issued all of Fleisher’s recordings on those labels, which means nearly all of Fleisher’s recordings. The 23 CDs, issued in slimline cardboard sleeves designed to look like the original LPs, are housed in a study box with an okay hardcover booklet. Naturally, the LP-era programming means that each long concertos by Brahms or Beethoven is on an individual disc, but given the price of the set, it’s worth it to avoid slinging a succession of such pieces at one’s ears like background music. And don’t you have a multi-disc changer by now?

In the CD era, the Brahms concertos appeared as part of the label’s “Masterworks Heritage” series, and the Beethoven concertos got a budget-line reissue, crowded on three discs with a so-so (non-Fleisher) “Triple Concerto” rounding it out. Much nicer to have them in this format.

Thanks to pianist Paul (“my brother is a philosopher”) Wittgenstein, who lost his right arm during the First World War and had the wherewithal to commission works, there’s a sizeable repertory of left-hand-alone works. Fleisher recorded a couple of CDs of them in the early 1990s, giving us the concertos by Prokofiev and Ravel, chamber works by Korngold and Schmidt, and a number of solo works running from Brahms’s arrangement of Bach’s solo-violin Chaconne to Robert Saxton’s “Chacony,” written for Fleisher.

Not surprisingly, even in such a straitened condition, Fleisher’s skill and musicianship remains unbeatable. And the happy ending to this story, and therefore to this CD set, is that Fleisher regained the use of his right hand – giving us a final disc of three concertos by Mozart, including a concerto for three pianos arranged (by the composer) for two, in which the pianist is joined by his wife, Katherine Jacobson Fleisher.

One of the great joys of classical music is its lack of absolutes, no matter how passionately the snobs may argue otherwise. The more time that you spend listening to the warhorses, the clearer it becomes that there’s no definitive way in which these works should be performed.

But we do need our benchmarks. And that’s why the Fleisher collection is important. You need it for the Beethoven and Brahms concertos, because you’ll find yourself going back to them repeatedly. But there’s a world of other fine performances within this small set that declare themselves as definitive as they’re every likely to get.

Leon Fleisher: The Complete Album Collection
Sony Classical
Posted by B. A. Nilsson at 12:17 PM