From the CD Shelf Dept.: Several years ago, I wrote a series of program notes for CDs issued on the Dorian Recordings label. Here’s another one featuring Peter Blanchette, virtuoso of the archguitar. (You’ll find an earlier-posted one, “Had Miles Met Maurice,” here.)

THOMAS MACE, AUTHOR OF THE 1676 treatise “Musick’s Monument,” preferred adjectives to accuracy and decorated his prose with terrible verse. Describing a trip to Italy, he mentions seeing “lutes, archlutes, guitars, and archguitars.” 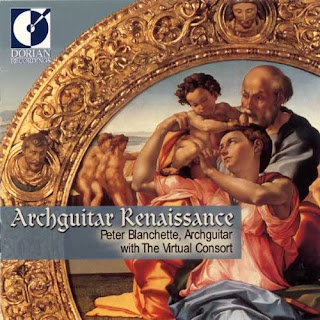 “By archguitar, he probably meant the chitarrone, which is basically a big guitar,” says Peter Blanchette. “No musician I know ever heard of an archguitar. So I co-opted the name.”

Blanchette grew up playing electric guitar in the Boston area, but a Julian Bream concert changed his life. He switched to lute and guitar, but felt frustrated by the limitations of both. He wished for more bass notes on the guitar, and it wouldn’t hurt if they were fretted, as on the softer-sounding lute.

He worked with guitar maker Walter Stanul on putting a playable form to these ideas, and in 1982 the new instrument was born. “For the first five or six years I played it, people would ask me what the heck it was. Eventually, I came up with ‘archguitar.’” Now all of the expanded-range instruments that Walter Stanul built for Blanchette and the others who play them are called archguitars.

Although there are several different models, they’re characterized by a smaller body than the typical Spanish guitar, giving it a more colorful tone. And the added bass notes have a clearer tone than they would on a larger body.

“Guitars a century ago were all small,” Blanchette explains. “I believe that they got bigger because concert halls got bigger. This was necessary before amplification, but a guitar in an intimate environment–or on a recording–doesn’t have to be big. I think smaller instruments have a more beautiful sound. Louder, you end up with instrument with fewer overtones and more fundamentals, which are the least exciting part of the sound.”


THREE DIFFERENT ARCHGUITARS are heard on this recording. The eleven-string archguitar is featured on most of the selections, backed by a four-string bass archguitar. “The four-string has a very long string length with a small, vihuela-like body shape. It’s not tuned to E A D G like a bass–it’s tuned C F Bb D.”

The liuto attiorbato is a large, lute-shaped instrument that includes design aspects of the theorbo, a hybridization with historical precedent. Blanchette: “All of the baroque lutes I know of were Renaissance instruments that were modified (they were expensive things) with longer string lengths and neck extensions. The liuto attiorbato is low pitched, and so would be more often used for playing continuo–but my idea of the Virtual Consort is an evening with four or five guys who play plucked instruments and few brass players: At some point you’d give the poor guy who’s always playing the bass line a solo.” Liuto attiorbato is heard on the Galilei gagliarda and the Bianchetti saltarello, as well as the anonymous “Vaghe belleze” and saltarello.

Horn player Charlie Schneeweis employs a similar variety of instruments: cornet,  trumpets in Bb and C, mellophone, baritone horn, valve trombone, and flügelhorn are part of his batterie. “How do you combine these Renaissance notes and rhythms with what the modern trumpet can do?” asks Blanchette. “Charlie’s a very lyrical, vocal kind of player. When he plays, he sings. I would tell him things like, ‘Don’t play with any vibrato unless you really have to. Think pure.’ And that’s what he’d do, just letting a little sink in once in a while.” Although most of the instrumental texture was achieved by overdubbing, Blanchette and Schneeweis put a spirited performance at the heart of each selection. “It’s all based on a two-track recording of Charlie and me.”

Pairing the guitar and trumpet “came out of nothing more than the fact that I live out in the boondocks, and a neighboring musician who shared my interest in this music was a trumpet player–to me, that’s the spirit of the Renaissance. The sheet music parts usually aren’t assigned to specific instruments. As if they’re saying, ‘Whatever you’ve got in the house tonight, use ‘em.’”

Obviously, historical accuracy isn’t the issue with Virtual Consort. “I’m not trying to recreate in any authentic way the way the music was done. I know the music very well and have studied it for many years. When it comes to pleasing my ear, I use what I know how to use.” He names Gustav Leonhardt, Trevor Pinnock, and Musica Antiqua Köln among his favorite players, “but whether or not you’re into early music, what matters is whether you play the music with spirit. The great music–John Dowland, or the basses danses from the French Renaissance–it’s got to have fire and soul. All great music deserves fire and soul.”

Notes on the Composers:

Pierre Attaingnant (c1494-c1552) was a Paris-based publisher of liturgical books and music who invented a printing process by which notes and staffs could be printed in one impression, which changed the face of music publishing. There is no evidence that he composed any of the works collected in the many books he produced, but he tirelessly petitioned the royal court for copyright protection of his material, earning him not only such protection but also appointment as King’s Music Printer. The works on this recording come from a collection of eighteen basse danses.

Jean-Baptiste Besard (c1567-c1617) was a doctor, lawyer, and lutenist, born in France and much traveled throughout Europe. His Thesaurus harmonicus, published in 1602, is a collection of over 400 works for lute or lute and voice presented in French tablature, as well as a guide to lute playing. Among the 21 composers represented are Dowland and Galilei, and about 40 pieces are by Besard himself. Like Besard, the collection traveled through Europe, and his lute-playing manuals were the most extensive and influential of their day.

Pietro Bianchetti (1550s-c1620) has escaped biographical scrutiny for centuries, although Burney’s references to lutenist “Peter de Blanco” suggest that Bianchetti turned up in several European capitals where he was known for both his sensitive playing and his innovative instrumental design.

Mateo (Marchetto) Cara (c1470-c1525) was an Italian lutenist-singer known as a composer of frottolas, a secular union of poetry and music that prefigured the madrigal. Cara was maestro di cappella to the Gonzaga court of Mantua, and was welcomed at other courts throughout northern Italy. Professional and amateur poets clamored for Cara to set their verse, and the results influenced songwriters long after Cara’s death. One 16th-century scholar declared that Cara, “following in the footsteps of Josquin, taught the world how to compose music.”

Wieceslaw (Wojciech) Długoraj (c1557-c1619) tried to serve nobility, but picked a particularly brutal master named Zborowski. He next tried life as a monk, but picked a particularly restrictive way of life and was expelled. The virtuoso lutenist and composer lived a soap opera life: Having found peaceful service with a calm master, he was discovered by and forced to return to Zborowski. Długoraj found some compromising letters of his master and forwarded them to the king, who had Zborowski executed and appointed Długoraj a lutenist at the court. Zborowski’s family vowed vengeance on Długoraj, sending him hiding in Germany, where he apparently remained. His works reflect his interest in Polish and Italian folk dances.

John Dowland (1563-1626) wanted nothing more than to play his lute for the Queen, but bad timing or (he claimed) the wrong religion scotched his first couple of chances. He applied to Queen Elizabeth in 1594; upon being turned down, he took his lute from England to Germany, Italy, and Denmark, finding favor in the royal courts. He returned to England in 1597 after hearing that the Queen had asked after him–and again his job application was declined. Meanwhile, his published compositions gained popularity. He tasted both wealth and poverty before King James, in 1612, gave him that court position. Ironically, he published very little after that. He is now regarded as the finest English composer of songs and lute music of his era.

Vincenzo Galilei (1520s-1591) was a lutenist skilled enough to merit lessons in theory with the finest teachers in Venice; he also was father to the scientist Galileo. Passionate about the union of words and music, he encouraged the singers and composers of his day to stick to what’s simple, as it’s more expressive of the human soul. He also championed the lute over the organ because it was able “to express the affections of harmonies, such as hardness, softness, harshness,  and sweetness, and consequently shrieks, laments, complaints, and weeping, with such grace and wonder.”

Jakob Polak (c1540-c1605) was one of the finest lutenists of his day, his compositions demonstrating not only great finger dexterity but also an innovative harmonic sense that helped shape our modern system of major and minor tonalities. Born in Poland, he traveled to Paris in his mid-30s, where he lived out his days as lutenist to King Henri III. He is also known as Jakub Reys and Jacques le Polonois.