Hopeful Pessimist Dept.: One of the most wonderful aspects of human nature is the sense of hope we’re all born with, a sense vigorously drummed out of us by public schooling and television, those twin beacons of consumerist despair-mongering. Back when he lived in the Adirondacks, Bill McKibben sought to rekindle that sense of hope through a wise look at the environmental challenges that dog us to this day. Here’s my review. (Keep an eye out for his forthcoming book Oil and Honey.)

BETWEEN THE END OF NATURE, a dark assessment of the extent to which industrialized humans have destroyed all hope of ecological balance, and Hope, Human and Wild, which looks at practical approaches to a more environmentally conscious way of life, Bill McKibben edited a collection of writings by John Burroughs. The Delaware County-born Burroughs was one of this country’s most celebrated nature writers, although the acclaim has dimmed considerably since his death in 1921. 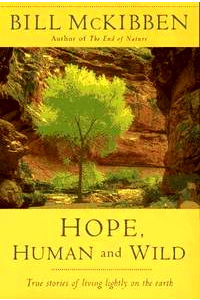 Reading Burroughs, you can’t help but wish for an environment free of the plunder we’ve since wreaked. Looking out his Adirondack Park window, McKibben couldn’t help but notice the return of trees and bushes and animals that earlier logging had dismayed. Living lightly, as he terms it, is helped by an abundance of natural resources – or at least the space and freedom to grow them. That’s all very well when you’ve got a wilderness around you. To see how such issues can be wrestled in urban environments, McKibben visited the city of Curitiba in southern Brazil and the Indian state of Kerala.

Both crowd a lot of people into little space, both deal with extremely low per-capita incomes. We meet the mayor of Curitiba, an imaginative man who concocted a deal that lets citizens turn in sacks of garbage for sacks of food and who helped institute what may be the world’s most efficient bus system; Kerala, where a communist government often prevails, has a record of success with education and health care that should be the envy of all industrialized nations.

McKibben brings a fictionist’s storytelling ability to his well-reasoned argument for more (literally) conservative living, offering no utopias; “indeed,” he writes, “as the word is commonly understood, we have been living in a utopia all our lives.” Which means that all the stories in his book quietly underscore the need for change in the way we live.

And that has provoked a first round of critical reaction that is in its own way as fascinating as the book. The New York Times fired two shots: in the Sunday review, science writer William K. Stevens clings to the idea of technology as ultimate savior, while daily reviewer Richard Bernstein dismissed McKibben’s tone as that of a Sunday school sermon, and also tooted the technology horn. The Philadelphia Enquirer’s environment writer was simply nasty, while Entertainment Weekly stumbled over its own poor prose while expressing its resentment.

These critics all had in common a terrific objection to any idea of sacrifice. That’s a substantial part of the hope in Hope, and nobody who’s used to living high on the hog wants to consider a simpler alternative. Ironically, before all the technology Stevens defends set it, we were a nation of communities, frugal and generous, not obsessed with lifestyles and leisure time. McKibben’s book indirectly salutes that tradition without dismissing all technology – only that which is egregiously self-indulgent. He deserves a lot of credit for finding success stories right in our midst, and even greater praise for having the wisdom to offer them to us in a credible context.