Brink of Tears Dept.: Don’t read this. I’m not even trying to cajole you into it with reverse psychology. It’s truly mind-numbing. It’s part of a large assignment I took on nearly twenty years ago to summarize computer industry market-survey info for Frost & Sullivan. Trouble was, it was so deadly that I took far longer than I should have, with the result that as I neared the end of the project, the data for earlier chapters had changed, necessitating rewrites. I had a nightmare fear that I’d be locked into the thing for the rest of my life, so I arranged to spend a week in Manhattan working in the company’s office, which did the trick. It was so cheerless there that I had no distractions. Here, minus the many charts, is an analysis on the market for modems. 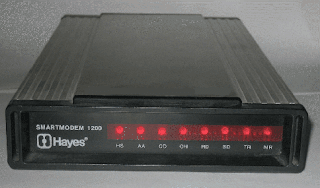 AS PERSONAL COMPUTERS have gotten smaller, faster, and comparatively less expensive, modems have followed that trend. Very early modems were acoustically coupled to a telephone handset by means of a box with what looked like suction cups to make a soundproof connection. Now they plug directly into a standard RJ-11 telephone jack, and usually offer a secondary jack into which a phone can be plugged. A modem's speed is measured in bits per second, referring to the amount of data (measured in binary digits, or bits) that can be modulated and sent. An early standard was 300 bits per second (bps), which is the equivalent of a slow typist. It soon quadrupled to 1200 bps, which is considered the high end of the low-speed modems considered in this report.

Medium-speed modems comprise the widely-installed base of 2400 bps units, with a small segment of models that run at 4800 bps. Improvements in speed are the result both of more sophisticated signalling techniques that actually allow more data to be transmitted at a standard frequency, and of better error correction hardware. Once the province of special software-based techniques, error-correction hardware is now found in most modems. The shift from medium- to high-speed (9600 bps) modems began in 1990, when a signaling scheme was approved by International Telegraph and Telephone Consultive Committee (CCITT), a French-based group that oversees world communications standards. A quick jump to 14,400 bps followed, opening the market for very high-speed modems, and even faster speeds and schemes are under consideration, with expected speeds of 19,200 bps and 28,800 bps.

Modem size is also changing. For a few years, external units followed the Hayes model of a rectangular box designed to sit under a telephone, with a set of front panel LEDs to indicate call progress. As phone design has become non-standard, so have external modems, now in such shapes as towers and cubes. Internal modems are designed for installation in a personal computer's peripheral slot. Because it requires no power transformer (it draws from the PC's power supply) and no box, it is generally less expensive than its external equivalent. Another important emerging form factor is the portable modem, designed for use with laptop and notebook computers. External units can be as small as a cigarette pack, while a new line of internal modems has been created to follow PC Card design, a credit-card-sized that plugs into specially equipped notebook (and, lately, desktop) computers.

Also characteristic of the changing face of the modem market has been the shift from leased and private-line use to regular dial-up lines, which is more a credit to better modems than better phone lines. Most high-speed and very high-speed modems now also include faxing capability, calling for special software in addition to the usual communications packages. Sending and receiving faxes from the computer is often more convenient than using a stand-alone machine, and certainly more economical.

Three years ago, 73.9 percent of the $1.6 billion modem market came from sales of dial-up modems. By 1998, they will account for 98.5 percent of the revenues, expected to total about $2.7 billion. Modems have become faster and more reliable, causing the dramatic shift from leased/private line modems to dial-up modems that has been taking place. The leased/private line modem market share dropped from 16.8 percent in 1992 to a projected 1.4 percent in 1998. Also significant is the trend away from slower modems, as high- and very high-speed models compete for the bulk of the market. Demand for low-speed modems is expected to end by 1995, and medium-speed modems, which rose to a 42 percent market share in 1992, will almost vanish by 1998.

Low-speed modems set a standard for physical design, from the Hayes-style external model shaped to sit beneath a telephone to the half-card-sized internal modem, slightly lower-priced because it draws power from the computer and needs neither a case nor a power supply transformer. The Hayes-compatible software command set common to almost all dial-up modems also had its inception in low-speed modems. Although there was a belief that pocket-sized low-speed modems would continue to assert a market presence, the higher-speed alternatives now can be packaged in the same format size just as inexpensively. Manufacture of low-speed modems has all but stopped and few vendors continue to supply them. Revenues dropped from $87.1 million in 1988 to $1.1 million in 1994, and there should be no significant market share by 1996.

Medium-speed modems, centered at 2400 bits-per-second transmission, generated $672.9 million in revenues in 1991, but is expected to drop to $9.5 million in 1998. Because a medium-speed modem offered at least twice the transmission speed of low-speed models, it was a profitable alternative in its time; again, the price drop in chipsets for high-speed modems is also pushing this category out of the market.

The 9,600 bits-per-second modem market has shown a remarkable growth as it supplanted the 2,400 bps modem as an entry-level standard. Long the standard speed for fax transmissions, 9,600 bps is fast enough to allow remote access to a computer at a tolerable pace, opening that niche of modem activity. Bolstered by hardware-based error correction and data compression, it has proven to be a comfortable, economical alternative to 14,400 bps.

High-speed modems come in a variety of form factors. The most popular, external, accounts for over half of the market share, with internal modems accounting for another 25 percent. Rack-mount modems have a small 7.8 percent share, while pocket modems, the fastest-growing segment, should climb from this year's 12.5 percent to 27.6 percent in 1998, largely at the expense of external models.

Although nearly identical to high-speed modems in features and form factors, the very high-speed modems give the added benefit of faster transmission speeds. The top speed since 1991 was 14,400 bps; this is currently changing to faster speeds as manufacturers second-guess the CCITT's V.34 (formerly V.FAST) modulation technique, expected to double the V.32bis standard to 28,800 bps. Until the widespread implementation of ISDN starts to slow the modem market after 1996, expect the highest revenue growth rate in this market segment.

Leased-line modems are used to transmit over telephone lines leased from carriers such as BT Tymnet or MCI, while private-line modems operate over fiber-optic lines. Because of the improvements in the speed and reliability of dial-up line modems, this market has been in a decline since the late 1980s and is expected to continue this decline.

The shadow looming over the entire modem industry is the inevitability of digital communications (ISDN), which will effectively eliminate the need for modem hardware. Most of the major companies are planning strategies to cope with the changeover, which will require much simpler equipment to send computer data over telephone lines. In the meantime, the demand for modem hardware steadily increases as consciousness of and demand for information services continues to grow. The much-vaunted "information highway" will be traveled only by those with appropriate hardware.

Add to that the increased demand for local and wide-area networks, enterprise-wide computing, and the file-transfers necessary for many businesses, and faster, more efficient modems will be attractive, even to the point of replacing an installed base of slower modems.

With the CCITT's newest communications standard, V.34, providing a transmission speed of 28,800 bits per second, the market for very-high-speed modems is more viable than ever in the short run. The economics of regular telephone-line transmission supports the use of the fastest, most reliable modem available, which just a few years ago was the province of the medium-speed modem, typically transmitting at 2,400 bps. Advances in hardware development have allowed the more recent 2,400 bps models to include data compression algorithms that can achieve the equivalent of 4,800 bps; although there was a brief attempt to manufacture true 4,800 bps models, that was quickly supplanted by the availability of the 9,600 bps chipset.

Medium-speed modems have become very popular in smaller form factors, especially in pocket-sized modems for use with portable computers. Pocket and small-sized internal modems will dominate the category for the rest of the appreciable life of this category. Although high-speed modems are now commonly available, price erosion in the medium-speed realm has stimulated sales and keeps the product category alive: in 1992, 4,438,800 medium-speed modems were shipped, for a revenue of $768.1 million. Although one million more units were shipped in 1993, the revenue dropped to $753.4 million. By 1998, a negative revenue growth rate of 86.8 percent is expected, with shipment of only 107,100 units.

Although the direct channel accounted for as much as 40.7 percent in 1988, it is expected that the channel will decline considerably as the demand for low- and medium-speed modems drops off. Sales of high-speed modems is expected to push the retail channel, along with a renewed interest from vendors who see a market saturation in dial-up modems along with declining profit margins. Vendors are also expected to focus on two-tier distribution as prices drop, with a resultant steady climb in the distributors’ channel.

VARs can also expect a steady loss of market share, reflecting the traditional association of VARs with the private/leased-line market and medium-speed modems. OEMs were the second-largest channel in 1992 thanks to demand for high-speed and fax modems, but the expected erosion of profit margins will drive the OEM share down dramatically as vendors align themselves with distributors and the retail channel.

Once the undisputed leader in the industry, Hayes has seen its technology copied and modified to a point that even several lawsuits has failed to diminish. Hayes is now one of about 200 vendors of under 9,600 bps modems in the U.S., and is still struggling to assert itself as one of the 50 vendors of over 9,600 bps modems.

The ready availability of modem chipsets has made it easy for clone manufacturers to join the fray. AT&T Paradyne's V32F-V42L chipset offers an integrated fax/modem services while drawing low power and therefore enabling long battery life in portable applications. Rockwell International is another key chipset manufacturer, touting the recent addition of voice recognition capabilities in its newest chipsets. GVC Technologies enjoys a reputation as a manufacturer of reliable modems, especially in the pocket-sized form factor; they also act as one of the largest OEM suppliers in the U.S. market.

Modem vendors are anticipated the shift to digital services by adopting strategies ranging from innovative work with ISDN products to expanding the corporate focus to include networking and enterprise-wide communications. Motorola Codex, one of the largest vendors of leased- and private-line modems, remains at the cutting edge of technology with its work in digital communications, while UDS Motorola is branching out into small form-factor modems and with PC Card-based communications services.