Uncle Ned Dept.: Yet another in a series of short stories I managed to slip into Metroland a quarter-century ago, before it went all alternative and everything.

THE WOMAN BORE DOWN on me with all the subtlety of an Ethel Merman song. “Neddie!” she cried. “Can it be?” 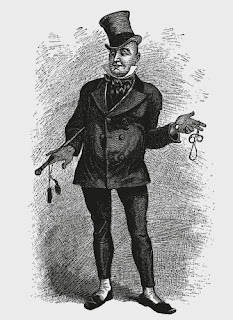 She peered into my face and shook her head. “No. I can see that now. You looked so much like him from a distance, but he was much thinner, of course.”

I had been enjoying my iced tea and cheesecake on the outdoor deck of a little restaurant a few miles up the Mohawk River, having just concluded a torturous visit with my brother-in-law Ted the Yuppie and his family. Something calming was required before the drive home, and an early dinner in the open air at a place I remembered from boyhood seemed like just the thing.

The place had changed. The original owner had retired and his bickering children took over operations, so you couldn't be absolutely sure of getting the same meal twice; but a cool drink on a sunny porch with the sweet scent of grapes on the breeze made up for a lot.

My assailant plopped into a chair and continued to study me. “You have his eyes, you know.”

She gave a theatrical sigh. “The man I was going to marry once upon a time. And I met him at this very restaurant, at the very table you’re sitting at. His name was Ned.”

That could only be my errant uncle. “Tell me about it,” I said.

This was several years ago (she began). Ten or more. Maybe twenty. I was just out of college and working for a local collection agency while I looked for something better to do. I guess it was a kind of initiation for new employees to handle this Ned.

A dentist was trying to collect from him, so I signed and sent the usual form letter. What I got back was a mash note. “My dear Miss Braintree,” it began – that’s my name, Claudia Braintree – “Thank you for your kind letter. You sound like a charming individual.” And he invited me to meet him for lunch! I was so embarrassed – I didn’t tell a soul at the office, else I’d have known he wrote something crazy every time they dunned him.

But I was so curious to know who would write such a crazy letter that, well, I called him one day. Only to discover that the number he gave me was for a local newspaper store where he loafed for several hours each day. He wasn’t there when I called, but he called me back just as soon as he got in.

You can imagine, I wasn’t too crazy by this time to meet anyone who couldn’t pay his dentist and didn’t have a phone. But you should have heard the way he sweet-talked me! I might as well have been the only woman in the world, the way he went on!

Next thing I knew, I was sitting here at this very table, waiting for him to join me for lunch on a beautiful sunny afternoon.

I guess I didn’t expect him to be so old, and I sure was surprised to see someone wearing a vest on a hot day. But there he was in his three-piece suit that didn’t really match and the kind of stiff straw hat that went out of style when my grandfather was young.

He knew who I was right away. “You have a fiduciary look about you,” was the first thing he said to me. “You must be someone I can trust.”

Honestly. I thought he was going to try to get me to tear up the dentist’s bill or something, but, not at all, he was really very sweet. I called in sick for the afternoon. We sat here until sunset. By dessert, we were holding hands.

He wouldn’t let me pay the bill, although I did anyway when the manager wouldn’t let him charge it. And you know what? It didn’t bother me a bit. Because I’d finally found someone who really needed to be looked after, someone I could take care of.

I guess it was a sort of “love at first sight” kind of a thing, which only sounds corny if it never happened to you. I think there was this appeal, too, because he was the exact opposite of everything I’d been brought up to believe in. He didn’t worry about where his next meal was coming from or how to pay the rent from month to month; he couldn’t tell you what the latest fashion was, never mind dress in it; he had a beard when nobody else wore them. He was wonderful!

We started a kind of whirlwind courtship that pretty much culminated in a return visit to this restaurant, because it was so romantic here. And I guess we both knew he was going to propose to me after supper.

Trouble is, we visited my parents in Syracuse the day before and you never saw people hate a man quicker and more thoroughly than my parents hated Ned.

Too old, too poor, too irresponsible, they told me, and it made an impression. They said they would disown me if I married him, they hissed at me all through dinner whenever he held his fork wrong or something like that.

By the time we were back at this table, the next night, I wasn’t any too sure about going through with it. And Ned took his sweet time through the meal, I can tell you. We had soup, even though it was a hot night. We had appetizers. We had salads. The entrees were humongous. He even ordered extra bread.

He talked about his life and all the wandering he’d done. And about his family, whom he didn’t much like, although he said there was a nephew who kept getting in trouble and might turn out okay.

We got coffee. We got dessert. It got dark, and you could tell the staff was getting anxious to go. They were putting up chairs on the  other tables when Ned ordered a bottle of champagne.

Then he invited the staff to join us for a glass, and he proposed a toast to the restaurant ... and I got even more nervous. What about the proposal, I wondered. Had he forgotten the ring or something?

I paid the check and suggested we let the people go home. “Fair enough,” he said. Now I was annoyed. Sure, I didn’t really want to marry him at this point, but at least he could ask me! I mean, I was 22 and nobody had ever proposed to me.

“Don’t you have something you want to ask?” I finally said.

He gave me his jaunty laugh. “I’m afraid of these outdoor places,” he said. “They’re too romantic. I’ve been a single fellow for quite a while, but it’s hard not to succumb when you’re right there with a beautiful lady, finishing a meal and communing with Nature. But I don’t think I should marry you. Not just yet.”

“Couldn’t you at least ask?”

That startled him. “Of course I could.”

He sat back down, jingled the change in his pocket. “Claudia,” he said after a big pause. “How about the two of us getting married?”

There’s something about the sound of that phrase: How about the two of us getting married? Ridiculous, of course, to tie myself to a ne’er-do-well like him . . .

“Of course I’ll marry you,” I said. I couldn’t stop myself!

And then, quite simply, he wasn’t there. My first thought was of those flying-saucer stories you hear, stories about people who suddenly disappear, but I could hear old Ned puffing and his change jingling as he took off down the street.

I know that, deep in his heart, he really wanted to go through with it, but I think he was the kind of fellow who gets scared off by marriage.

“When I tried to call him after that,” the woman concluded, “the guys in the newsstand said he was out of town. Eventually I gave up and the agency turned his file over to someone new. I did get married, but it only lasted a few years. I married just the sort of respectable, responsible man my parents would have chosen, and he took off with his dumb secretary. So I can’t help but wonder about that Ned.”

She studied my face again.

“There sure is a resemblance,” she concluded.

“That’s interesting. I’m a banker. I have three children. I’m extraordinarily respectable. But I think I know where you could find this Ned you’re after. I’m pretty sure I’ve had business dealings with a man who answers to his description.”

I gave her my uncle’s address. A bachelor like him is in danger of living too sedately.