Friendly Enemies Dept.: Chris Fisher’s film version of Meeting Evil, which went straight to DVD last year, suffers the problem that has bedeviled the handful of other adaptations of Thomas Berger’s novels: scriptwriter and director (who in this case are one) don’t understand the complexity of the book, which lies in a virtuoso combination of myth and language. Even Little Big Man, which made a reasonably successful trip to the screen, became merely picaresque. Here’s my review of Meeting Evil – the novel.

OUR WORST NIGHTMARES have an especially keen emotional acuteness without needing a detailed setting. The evil comes from an interaction with other people, and Thomas Berger’s 18th novel is a short, intense nightmare in which straight-laced John Felton becomes an accomplice to an arson, murder and robbery spree. 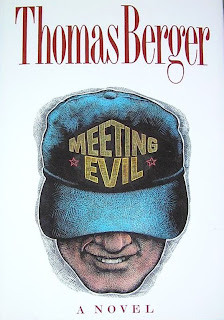 And every malevolent action is justified by Richie, the easygoing perpetrator, in terms almost too sensible-sounding for John to argue against.

Like a nightmare, John’s awful adventures are characterized by confusion: the details of Richie’s crime spree aren’t quickly apparent, and real-estate salesman John is driven to a nearby town that is nevertheless unfamiliar. When he breaks away from Richie and seeks safety in a farmhouse there, he’s held at gunpoint by the householder.

John heroically breaks free, and “the larger man proceeded, strangely, to fade away. He seemed intangible. Not that John wanted to touch him, let alone do him harm of any kind, but the man appeared to think otherwise and shrank behind crossed arms while growing shorter owing to a joining of knees, schoolgirl fashion: he was undergoing a process of physical degeneration through fear.”

In other words, fading from the dream. Only Richie, who always returns, remains large and constantly colorful, and it’s soon apparent that John has met his evil doppelganger. Richie embodies all of John’s suppressed instincts for violent self-preservation, with the deliciously unattractive filigree of macho, sexist good-ole-boy behavior.

By himself, wandering uncertainly back toward his home, “John felt so alone, so defenseless, that he would have welcomed the company of Richie at the moment, even though Richie was the source of all his troubles – but being so, was uniquely capable of clearing his name, at least in everything up to the moment they had parted ways.”

Evil at first is found in the outside world: John’s drama begins when he answers Richie’s knock on the door and request for help with a stalled car. As in a berserk dream, John gets his shirttail caught in the car door and his adventures then begin.

But the last quarter of the book brings that evil, now more fully developed and dangerous, into John’s home, when Richie poses as a wealthy house-buyer and inveigles his way into dinner with John and his wife, Joan. Berger has devilish fun setting up the scene, and keeps it perking with a sequence of tense but plausible exchanges as John realizes how ordinary Richie seems to unsuspecting others. As Richie himself explains, “My philosophy is, if you think there’s something wrong with me, then the burden of proof is on you, not me. Now, there are those who can’t take that ... They’ve got nobody but themselves to blame when things go against them.”

Berger long ago proved himself an expert at revealing the little secrets that confound our lives. Although he last presented a sympathetic killer in Killing Time (1967), Berger’s Richie has more in common with the rambunctious Harry of 1980's Neighbors, who turns protagonist Earl Keese’s well-set notions of power and friendship on end.

As a force of evil, Richie spends most of his time hidden from the obvious view of society; by choosing (or being chosen by) John as a morally-reversed second self, he proves how terrifyingly commonplace he really is.

To put it another way, Meeting Evil reveals that evil as something we meet daily and grapple with in what otherwise seem to be commonplace events. Berger’s skill in taking his literary scalpel to the skin of the ordinary is as impressive as ever.