Back to School Dept.: Welcome back to college, kids! Tuition is higher than ever, the workload sucks, and on top of all that, there’s no time for finding and cooking your own food. Or is there?

THERE’S A HORRIBLE MOMENT that occurs early in the academic year as your schedule comes together and you’ve made sense of the travel required to get from class to class and the time those classes will demand – time that eats into what ought to be a time for yourself. In other words, time that eats into eating.

You’ll feel this most poignantly if you’re fortunate enough to have access to cooking facilities, when you fall victim to the scenario in which you scoop up a few promising grocery items and have to choose between a hot meal or a night’s sleep. 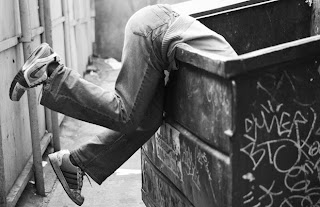 So it’s important to get stuff cheap, and learn to cook it easily and therefore quickly.

Acquiring discounted foodstuffs is all about timing and location. The local supermarket chains – Price Chopper, Shop-Rite, Hannaford – compete against one another with coupons and sales. Keep an eye on the circulars and you can nab some great two-for-one items, like the crushed tomatoes you can turn into sauce, and look in the stores themselves for the shelves where soon-to-expire or otherwise rejected items (produce, especially) are deeply discounted.

There are also the always-discounted stores, like Aldi, where you’re forced into an aisle-maze with people who look moments away from life-support. Here you’ll find brands nobody ever has heard of, styled to look like the mainstream brands. I take perverse glee in the fact that Aldi owns Trader Joe’s.

Take advantage any chance to get to the Asian Market on Central Ave., where you’ll not only find aisles and aisles of exotic seasonings and sauces but also a great selection of produce, meat and seafood. And there’s a stock of cooking equipment priced lower than at practically anywhere else. Get yourself a cheap Chinese cleaver.

For the adventurous visionary, there’s dumpster diving. I have neighbors who live off the stuff. Most stores toss foodstuffs right at the expiration date, which rarely means the food is bad. But you have to know the particular store’s disposal schedule – and know when the truck comes around. Basic tips include protecting yourself with the right clothing and smacking the side of the bin a few times to flush out any critters; the more advanced diver assembles a pile of cardboard boxes outside the bin (“I’m moving, and needed to haul my stuff”) or wears a butcher’s apron to fool the casual passer-by.

There’s very little creative magic required for competent cooking, which is why the Food Network is so heavily populated with idiots. You need a good knife, a couple of Band-Aids and a few basic kitchen moves.

First: Learn to slice stuff. You don’t have to be quick, just orderly. Some vegetables need to be trimmed, some need to be peeled. Both of which are excellent anti-vegetable arguments, but to wrangle them into edible form not only helps nutritionally but also looks impressive.

Next: Learn to heat stuff. Most anything vegetative can be softened with steam or simmering water, depending on your gear. Truly inedible items like kale need to be cooked to a pulpy mess, and nobody has time for that. Got freezer space? Frozen vegetables have improved, and a bag of California mix (broccoli, cauliflower, carrots, often other stuff) can assuage any guilt over that missing pyramid piece.

Even better: Learn to heat stuff in a wok. Your single most versatile stovetop item. Set a flame underneath one (or get an electric model) and you can combine all manner of disparate shit into a stir-fry. Soy sauce does a wonderful job of tying together (or obscuring) the flavors, and when if that doesn’t adequately cover the weirdness, dump an ounce of hot sauce on it.

Learning to season things starts with salt and pepper; my speedrail of spices includes chili powder, oregano, basil, cumin and granulated garlic. Combine any three of the above and make up an exotic-sounding name for the dish and you’ll be acclaimed as a visionary.

In the meat department, chicken is the most versatile, but it’s cheapest when it’s on the bone, an anatomical characteristic unknown to generations of McDonald’s fanatics. Buy a whole chicken and use that cleaver to remove the backbone, then hack everything else into large-ish pieces. Throw it in a pot with onions and peppers and tomato sauce and you have chicken cacciatore. But you can prepare it any number of ways; just make sure there’s some liquid in there (beer works well, if there’s any left).

If you can afford good beef, you’re probably dining out anyway. The cheaper cuts need to cook longer in some kind of tasty liquid (braising). It can take hours, but you’re inviting a nice flavor complexity.

I keep a bunch of canned stuff at hand, like tuna and a variety of beans. If you live on pasta, tuna will be welcome after all those tomatoes. Throw a couple of cans of beans together and add oil and vinegar and you have a salad – in fact, add oil and vinegar to almost any leftovers, serve it on lettuce, and you have as much right to call it a salad as Applebee’s does with its hard-to-recognize creations.

Finally, make friends with the egg. It’s a perfect vehicle for so many things – cheese, mushrooms, peppers, cheese, leftover pizza, rice, cheese – and only needs you to move it around an oiled pan over medium heat until it’s just stopped being runny. That’s your scramble; fold the eggs over whatever you’ve added and it’s an omelette. Whisk a bunch of eggs with some milk, cheese, and leftovers and oven-bake it for twenty minutes and enjoy a frittata.

Some of these moves have to be practices; some of them, I believe, are embedded in our collective unconscious, and when you ease away from the fast-food mindset – and find yourself truly hungry – the ability to cook a simple, satisfying meal presents itself. But still try not to burn yourself.