A Visit to Uncle Pop’s

Blue Plate Special Dept.: The first several months of my Metroland restaurant reviews were based on announced visits, as the copy below describes. I was tipped off about Uncle Pop’s by Ralph Buess, with whom I worked in the kitchen of Schenectady’s Mohawk Club before he opened and ran The Tory Tavern in Schoharie for many years. As Ralph promised, it was an anomalous a restaurant as you could imagine. It was open for at least another three years after my review ran, and then Mo and Judy left, I was told, for a warmer clime.

Reviews for Byron’s Blue Plate Special are written after Byron finishes dessert. Before that, he picks a place, tells the owner when he’s coming and mentions that a) he expects to be wined and dined like royalty and b) he doesn’t plan to pay for any of it. Your dining experience will no doubt be under dissimilar circumstances, but don’t let that stop you from visiting the fine establishments surveyed in this space. 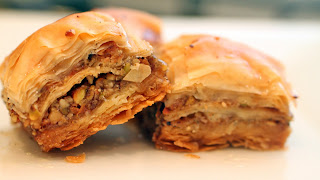 NO, MOHAMAD HARB ISN'T UNCLE POP.  His wife, Judy, chose that name for their little diner to honor a real-life uncle of hers. If the name sounds a little incongruous, take heart: it’s far less incongruous than the restaurant itself.

After all, where else in Schoharie County are you going to find falafel and hummus alongside burgers and fries? And, if Mo is in the mood, enchiladas, a chicken stir fry, veal parmesan? Where else in the world, you might ask!

“I am the first chef in this country to bring Middle Eastern food out of the city and into the countryside and have people accept it,” say Harb, now in his fourth year of business at this address.

People seem to accept it, all right. The place was packed when we arrived for dinner on a recent Monday. You know those scenes in old movies where everyone in a diner gets up and sings, all suddenly comrades, when the music kicks in? As soon as Drew began snapping pictures, first one table, then another approached him with advice as to who and what should be photographed – and then we discovered that all of the patrons knew one another.

At $14, the sirloin steak for two is the highest-priced item – but that’s for two, and only a couple of veal or shrimp dishes for one go as high as $8. The lunch menu is priced even lower, with a full selection of sandwiches.

You park in the front, enter on the side of a one-story, L-shaped building. There is an antiques shop that Judy runs to one side of the restaurant. Ten tables and eight counter stools limit Uncle Pop’s capacity, but that’s fine: everything is made to order as Mo hurries from floor to grill to cash register. The room has a sort of flea-market look. no two tables or chairs are alike. A flowered paper of light blue is hung on one wall; the adjacent is painted orange. A bead curtain hangs by a corner, pulled to one side.

The specials this evening represented the variety Harb likes to feature: veal cordon bleu, a rib-eye steak, spaghetti and meatballs, chicken Kiev. And, because of a special request, he had prepared a batch of enchiladas.

For us he had something else in mind, so we didn’t even have to order. Even though he complained of being short some ingredients, the platter we received was delicious and handsomely assembled And it featured an array of Harb’s native specialties.

Kafta is a deep-fried pattie of seasoned ground beef. Along with that were wedges of deep-fried cauliflower florets and eggplant slices. Generous helpings of hummus, a puree of garlicky chick peas and sesame seeds, and babe ganouj, a similar concoction that uses eggplant as a base. Hot wedges of pita bread were served alongside, and the platter also was garnished with a generous helping of tabouli, a salad made from buighar wheat, mint, tomatoes and seasonings.

Born in Lebanon, Harb had two restaurants in Beirut as well as jobs in Milan, London and Paris before emigrating to Los Angeles in 1978. He is proud of his naturalized citizenship and quickly observes that his menus begin with a core of American items.

It was on a visit to his sister-in-law in Rexford that Mo and Judy saw the building in Middleburgh for sale. “We just adored the area,” she says, “and I thought this would be the perfect place for Mo to work.”

Little by little, the structure has been improved and expanded. There are a couple of outdoor tables for warm weather dining and, of course, Judy’s just-opened antiques shop.

Her husband likes this setup best of all those he has worked. “It’s very European,” he says. “Here we have a shop and a restaurant and a beautiful view.”

Desserts vary according to materials and demand. One of the patrons asked if any of that rice pudding he made yesterday was left. Another confessed to have stayed late and finished it off. “So I’ll have to make it again,” Mo shrugged.

He makes four different styles of bakalava. “That’s how we do it in Lebanon,” he explains. “One I make with pistachios and filo pastry. One I make with homemade dough, one just with nuts – they all vary.”

What you’ve got, then, is a diner without the train-car outside. Cozy, inexpensive – perfect for the traveller tired of plastic burgers. Bur the locals may not appreciate having their secret leak out – they already do a good job filling the tables at Uncle Pop’s as it is.