Pease Porridge Dept.: Although this was written for and during the beginning of winter, the rush to slow things down should take place throughout the year. At least that’s my excuse for blog-posting it now. I’m taking it slow.

SOME OF MY FAVORITE MEMORIES are the night-before-Christmas marathons my mother used to hold as she prepped for a relatives-intensive holiday feast. I think I inherited my own penchant for staying up late from her, as it’s usually a time of relative peace and quiet and, if your brain doesn’t complain, you can get a lot of work done then. 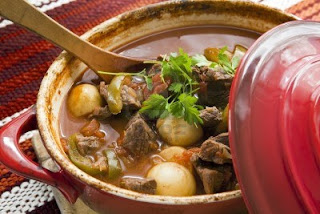 In her case, it was a chance to attend to the cooking unimpeded by the well-meant but never-helpful help of others, and I’d sit and watch provided I didn’t get in the way myself. And this time was needed because there were no shortcuts she was willing to take. Even in the antediluvian days of my boyhood, many supposed worksaver products were flooding the foodstores, with accompanying ads that characterized the time spent in lengthy food preparation as an evil, selfish thing wrenching you from the much more important time you could spend at work or with family.

As Neil Postman and others have observed, TV commercials are mini-sermons that offer promises of redemption gained merely by purchasing a product. The appalling by-product of the convenience-food mentality, which now includes a never-ending flood of cookbooks and TV shows, is that the most wonderful aspects of cooking and dining are being lost to the misguided notion that mealtime is an interruption of family (and work) life.

To put it another way, there’s no such thing as a 30-minute gourmet. A true gourmet can easily prepare a meal in half an hour, but nobody whose time is thus restricted can be considered a true gourmet.

Cooking is an art, and it’s the most sensual of the arts. Whether you’re grilling burgers in the yard or crafting a multi-course formal meal, you have the potential to engage everything – all five of your perceptual devices, not to mention the delightful interface of each to each. But if your main purpose is to do it in a hurry, you’re doing yourself a disservice.

“It’s like making love,” says chef Ric Orlando, owner of New World Home Cooking Co. in Saugerties. “A quickie is good every once in a while, but if that’s all you’re having, there’s no passion.”

Orlando is a member of the Slow Food Movement, founded in Italy in 1986 (in response to the opening of a McDonald’s in Rome) and now a worldwide network of enthusiasts who share the belief that the fast food mentality that has overtaken our lives is both physically and spiritually unhealthy. As the group’s manifesto notes, “In the name of productivity, Fast Life has changed our way of being and threatens our environment and our landscapes. So Slow Food is now the only truly progressive answer.”

The chief complaint I hear from those who would hasten their food preparation and consumption is that there’s not enough time in the day to allow anything more leisurely. A few questions later I usually learn that those complainers, like far too many people, are intimidated by the prospect of actually cooking – or have tried to reduce the process to a set of cookbook-assisted steps, not unlike the construction of a plastic model.

You come home from work. You’re tired. The last thing you want to do, you insist, is that much more work, the work, you fear, that some fancy-assed meal would demand. But food preparation isn’t work the way your job is work. It’s a comparatively small effort that offers a cornucopia of rewards.

Cut yourself loose from preconceptions. Lay in some staples and don’t even plan a meal. Start with an onion. Peel it and savor the sensations. Chop it into small pieces. Do the same thing with a carrot and a stalk of celery.

In The Lonely Guy’s Book of Life, Bruce Jay Friedman suggests that you get some onions and peppers and garlic sautéeing in some olive oil. That’s your Big Three, and from there you can go anywhere. Add the carrots and celery as well and you’re halfway to soup, at least.

But the main point is to savor the ingredients and let your senses tell you where to go next. Casserole? Stew? Some kind of pasta dish? Add something, season it and taste it. You’re starting to cook.

My daughter now helps out with dinner ideas. “Chicken,” she’ll suggest, “in some kind of sauce with lemon in it, not too spicy.” And she knows that it’ll probably begin with an onion and some garlic. It becomes a family event. We’re in no hurry, we’re used to dining somewhat later than our neighbors. But when we sit at the table, it’s truly a family event.

It’s no surprise that Chez Panisse founder Alice Waters, long an advocate of locally grown produce and careful preparation, should become a Slow Food enthusiast. “It was everything that we'd been trying to do at Chez Panisse – what we believe in,” Waters told Mother Jones magazine in a May, 2003 interview. “Slow Food takes very seriously the relationship between food and agriculture, and food and culture, and the choices that we make everyday about what we eat. Our choices either support the cultural richness of our lives and conserve natural resources for the future or they have the reverse effect: preserving the values of a fast food nation, depleting the cultural richness of our lives.”

Fast food is like television in that it inhabits a physically diminutive space but grabs a huge part of your consciousness – if you allow it to do so. And when you let yourself succumb to its oh-so-alluring spell, it’s hard to see any alternatives.

The belief that you can skip the fast-food window and prepare and enjoy your food in a hurry is just another manifestation of that misguided belief. It means you’ve allowed yourself to give up precious time and conviviality to unhealthy pursuits.

As Waters suggested, there’s also a community-wide benefit to re-prioritizing the way you cook and the way you eat. Farmer’s markets become more appealing, and from there community supported agriculture might beckon. We find it much more reassuring to buy our meats from local sources where there’s far less health risk.

But the most wonderful benefit is in the kitchen, at the prep table, as your mise en place takes form. You’re in complete creative control of a meal that’s going to nourish yourself and your dining companions, and long before you serve it you’re already enjoying the aroma and the feel of your food. It’s more involving than any form of entertainment, because you’re no longer in the audience. It’s therapy. It’s comfort. It’s the only way to live.